A Stunning Milky Way Captured from an Island Paradise

Today in pretty space pics: the Milky Way, viewed from the Cook Islands in the southern Pacific Ocean on a... 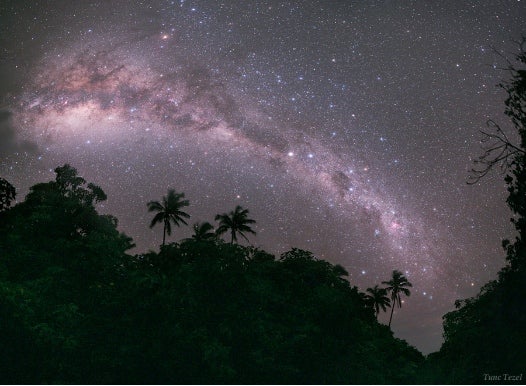 Today in pretty space pics: the Milky Way, viewed from the Cook Islands in the southern Pacific Ocean on a clear summer night. Snapped by skywatcher Tunc Tezel on the second largest Cook Island of Mangaia, the image was chosen as a winner of the National Maritime Museum’s Astrophotographer of the Year 2011 contest. And it’s the most beautiful thing you’re going to see on this back-to-work Monday.

For those curious about how we can see our own galaxy from inside our own galaxy, it’s all about perspective. Our solar system resides way out in one of the Milky Way’s spiral arms, toward the edge of the swirling mass of stars that live in our galactic neighborhood. The sun is about 26,000 light-years from the galactic center, and since the galaxy is roughly 100,000 light-years across (give or take 20,000 light-years), from our perspective we can look back in toward the center and see a great deal of the Milky Way.

That’s exactly what Tezel was doing while looking for a clear patch of sky from which to watch a solar eclipse. Using a modified Canon EOS 5D, he snapped several 30-second exposures that let in all the light from Milky Way you see here. The bulge at the left of the band is the galactic center, near Sagittarius and Scorpius. To the right: The Centauris (Alpha and Beta), the Coalsack nebula, and the Southern Cross.