Science Has Discovered the ‘Pigtail’ Molecular Cloud and it is Beautiful

But we're not yet sure exactly what it means 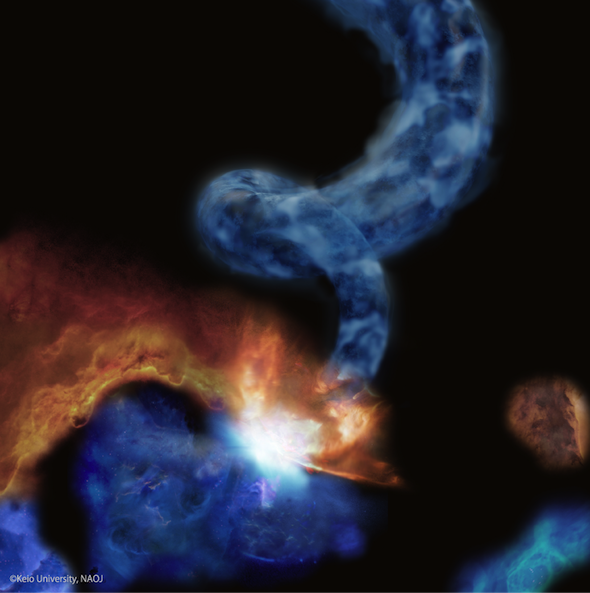 Some 30,000 light-years away near the chaotic, gaseous region near our galactic center, a team of Japanese researchers has found the strange cosmic feature you see above: a helical molecular cloud twisting across some 60 light years. This kind of structure is not the kind of thing astronomers expect to find here, but in observing the “pigtail” molecular cloud, as they are calling it, they have figured out some interesting things about the goings-on there at the heart of the galaxy and the magnetic characteristics that exist there.

Within a roughly 600-light-year radius from the center of our galaxy, there is a dense region of stars and the molecular gas that feeds the formation of said stars. Prior to star formation, this molecular gas is pulled into vast molecular clouds that are pulled into two elliptical orbits around the black hole that anchors the galaxy at the center by magnetic field lines that exist there.

These two massive loops of molecular gas are nested, one inside the other, but they intersect at two points on the galactic disc, and at these intersections both the molecular gas clouds and the magnetic fields collide, changing the behavior of both. For the molecular clouds, research suggest these collisions cause the compression of gas that triggers active star formation. For the magnetic fields, the flux in the magnetic lines causes a strange pillar of magnetism to arise perpendicular to the galactic disc, extending “up” and “down” from the points of intersection (the illustration below, supplied by Keio University, might help you picture this).

That would explain why some of the molecular gas in this region might be pulled into a column above and below the neat elliptical orbits of the main molecular clouds. But why the helical structure? It’s somewhat mysterious, but the researchers have a guess. They describe this magnetic tube running perpendicular to the galactic disc as being influenced by the frictional contact between the two main clouds (they describe this as similar to twisting a straight string by rolling it between your thumb and forefinger; eventually it takes a helical shape). This twisted magnetic field gives us the strange “pigtail” feature rendered above.

It might be dismissed as a phenomena if two other helical structures had not also been identified near the galactic center, suggesting that this strange magnetic behavior isn’t isolated or completely anomalous. The researchers aren’t quite sure what it means for our understanding of the region near the galactic center, but it should lend some insight into the strange magnetism taking place there. 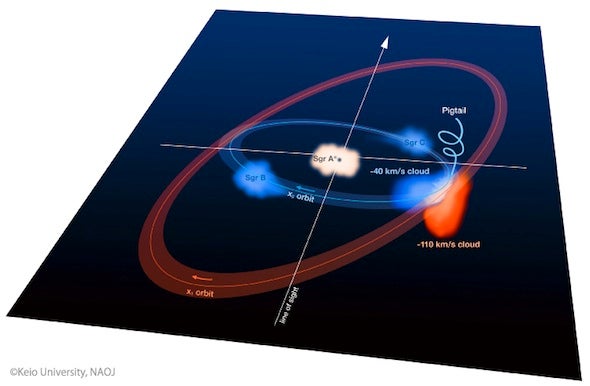 The Making of a ‘Pigtail’ Molecular Helix