The gas and dust clouds are in the Taurus star-forming region and are offering a glimpse into the early days of young stars. 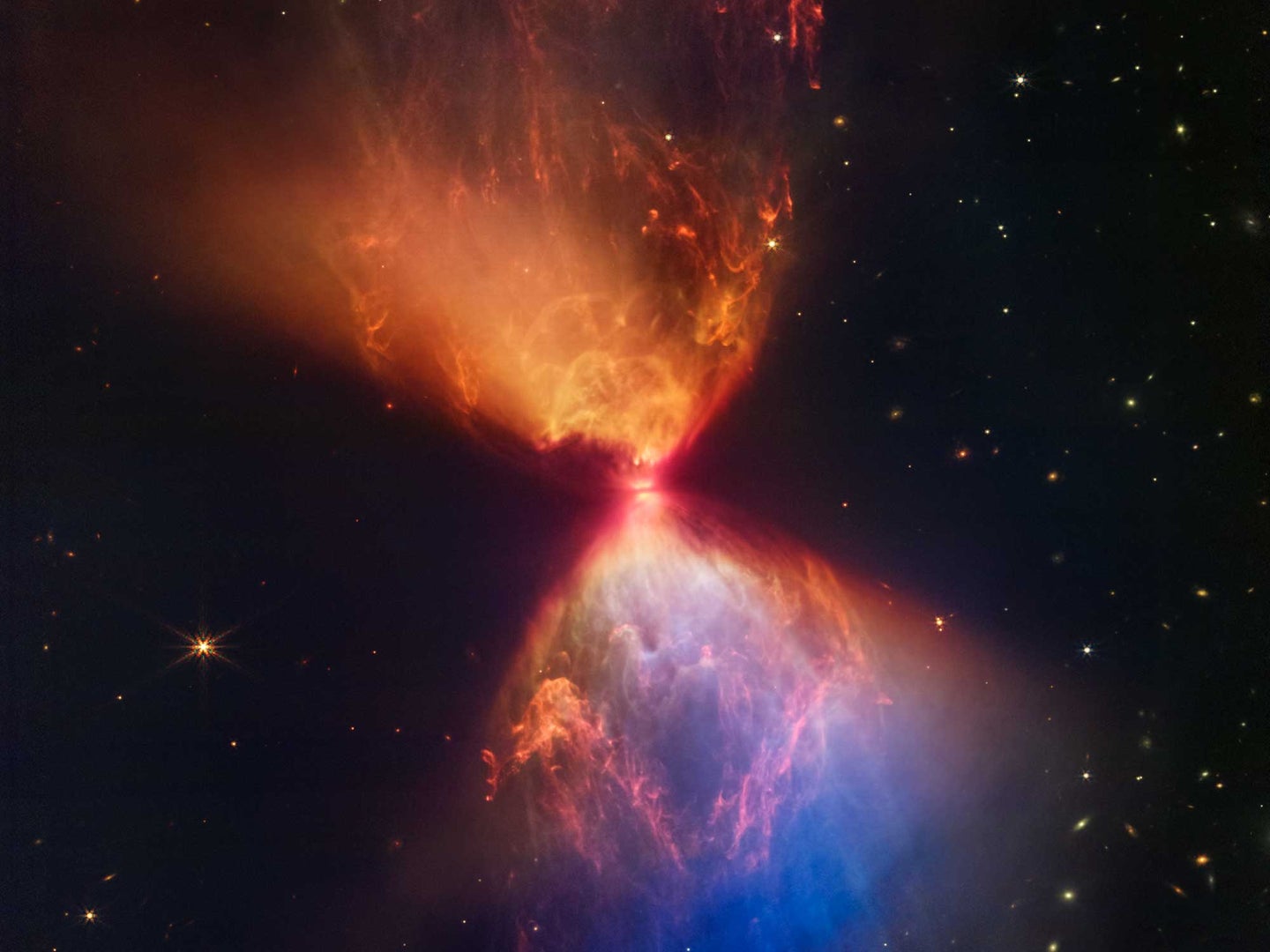 While most space cadets were understandably busy re-watching Orion’s successful launch yesterday, the James Webb Space Telescope (JWST) was putting on a stellar show of its own.

According to NASA, a new image taken by the telescope’s Near-Infrared Camera (NIRCam) is giving astronomers a better look at some of the previously unseen features of the protostar hidden in a dark cloud named L1527. The blazing occlusions are located within the Taurus star-forming region (about 430 light years away from Earth) and are only visible in infrared light. NIRCam can see in infrared light, so it can process images that previous space telescopes couldn’t and is giving insight into the humble beginnings of young stars.

[Related: JWST give a new look at the Pillars of Creation’s majestic explosion of young stars.]

At about 100,000 years old, the protostar within L1527 is pretty young by star standards, and is considered a class 0 protostar due to its age and its brightness. This is the earliest stage of star formation, and protostars like this one are still cocooned in a dark cloud of dust and gas. The protostar doesn’t have one of the most essential characteristics of stars: the ability to generate its own energy through nuclear fusion of hydrogen. It has a mostly spherical shape, but is also unstable, which makes it take the form of a small, hot, and puffy clump of gas.

In the new image, the protostar is hidden from view within the narrow “neck” of this hourglass shape. The dark line across the middle of the neck is an edge-on protoplanetary disk. Light from L1527 leaks above and below the disk which illuminates the cavities within the surrounding gas and dust clouds.

NIRCam shows these clouds in blue and orange and outline the cavities that are formed when material shoots away from the protostar and collides with surrounding matter. The blue areas show where the dust is thinnest and the orange pockets are the thicker layers of dust that keep the blue light from shining through.

The image from JWST also shows filaments of molecular hydrogen that have been shocked as the protostar ejects material away from it. These shocks and turbulence can inhibit the formation of new stars, which would otherwise form throughout the cloud. Due to this, L1527 is a bit greedy, and is taking all of the material for itself.

The dramatic space scene JWST captured in this image reveals L1527 continuing to gobble up mass. The protostar’s core will gradually compress and it will inch closer to creating the stable nuclear fusion needed to bring it to the next stage of star life.

Dense dust and gas make up a molecular cloud that is being drawn into the center of the protostar. When the gas and dust falls inward, it spirals around the center, creating a dense disk of material called an accretion disk. This disk feeds material to the protostar and is the dark band in front of the bright center, and is roughly the size of our solar system (over 13 billion miles).

As L1527 gains more mass and keeps compressing, the temperature of its core will rise and it will eventually teach the threshold for nuclear fusion to being (about 100 million degrees Kelvin).

This new view takes astronomers back through time and shows what the sun and our solar system may have looked like in their earliest days over four billion years ago.