Uranus and Neptune both have the blues. But different hues.

Atmospheric haze contains the clues to their blues. 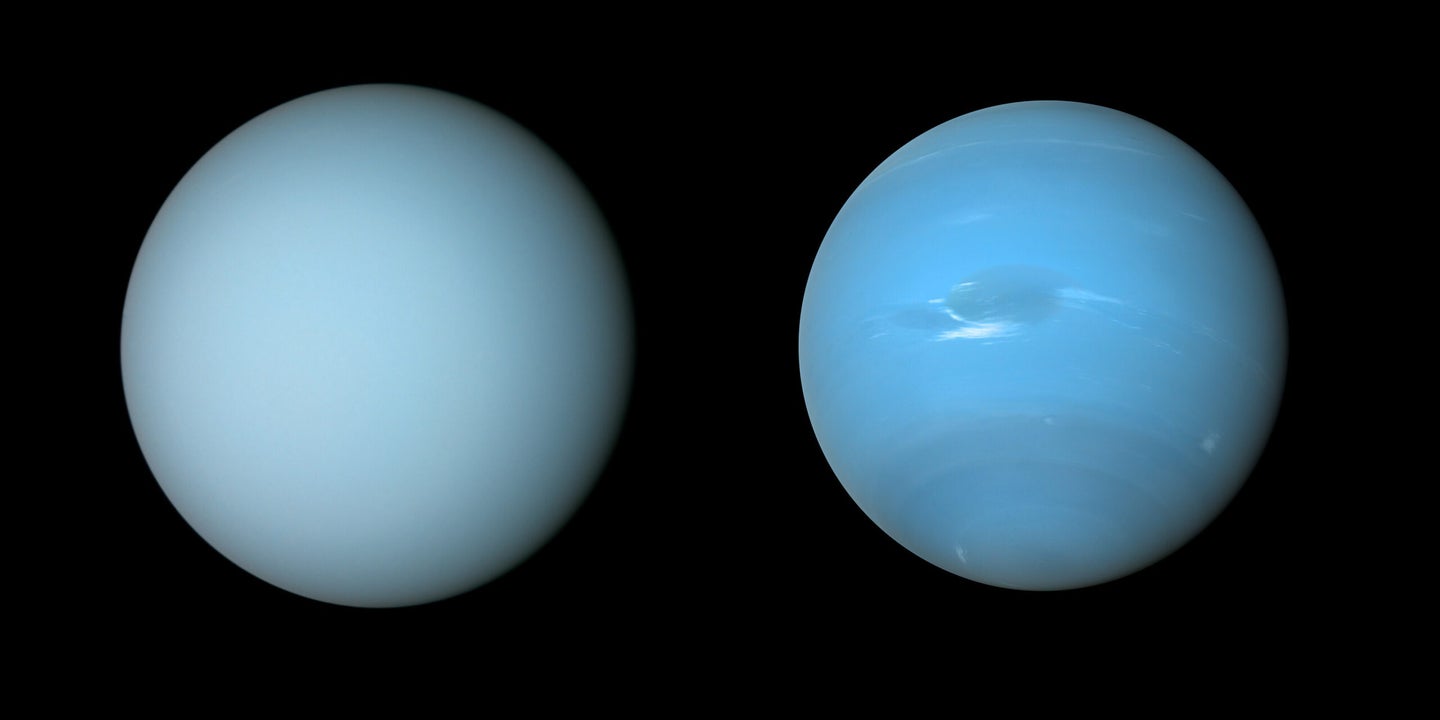 Neptune and Uranus are both ice planets in our solar system, but they possess different shades of blue. While Uranus has a pale cyan color, Neptune is a more vibrant blue. Astronomers from NASA have finally figured out why these two similar planets have different hues. The study, published last week in the Journal of Geophysical Research: Planets, found that haze particles accumulating in a planet’s atmosphere can whiten its appearance, which could explain Uranus’s paleness.

Understanding differences in color could help astronomers better understand the environment of these two planets. Besides the different shades of blue, both worlds have much in common. They both have similar atmospheric makeups, masses, and sizes—each about 4 times larger than Earth (if Earth was a nickel, Uranus and Neptune would be the size of a baseball).

Because Uranus and Neptune are nearly 2 billion miles away from Earth, it is challenging to learn the ins and outs of these two giant planets. And, unlike Mars, where the Perseverance rover is currently gathering data, these planets were only observed through a flyby with the spacecraft Voyager 2 almost 30 years ago. To fill in the gaps, the team analyzed data collected from several telescopes—the Gemini North telescope, the NASA Infrared Telescope Facility, and the Hubble Space Telescope—and created an atmosphere model to mimic those of Neptune and Uranus.

[Related: We’re finally figuring out how Uranus ended up on its side]

Previous research on the atmospheres of both planets could not explain the difference in color because they focused only on Neptune’s and Uranus’ appearance in specific wavelengths. For example, methane is present in both atmospheres and absorbs the red color from sunlight, reflecting blue light. The new model used a broad wavelength spectrum to observe multiple atmospheric layers.

“This is the first model to simultaneously fit observations of reflected sunlight from ultraviolet to near-infrared wavelengths,” Patrick G.J. Irwin, lead author of the study and a planetary physics professor at the University of Oxford, said in a NASA press release. “It’s also the first to explain the difference in visible color between Uranus and Neptune.”

The new model showed that the haze surrounding Uranus’ atmosphere is thicker and more concentrated than Neptune’s, causing Uranus to look lighter. Neptune has only a thin hazy layer, and its atmosphere is better than Uranus’ at churning up methane particles in the haze to make methane snow. In other words, Neptune is more effective at reducing the methane in its haze, and its snow allows more blue light to be reflected in the atmosphere, resulting in a robust blueness.

The researchers note that both planets would have the same shade of blue if neither atmosphere had haze. “We hoped that developing this model would help us understand clouds and hazes in the ice giant atmospheres,” said study co-author Mike Wong, an astronomer at the University of California, Berkeley in the press release. “Explaining the difference in color between Uranus and Neptune was an unexpected bonus!”