Monitoring our growing livestock populations will be crucial for preventing the next pandemic. 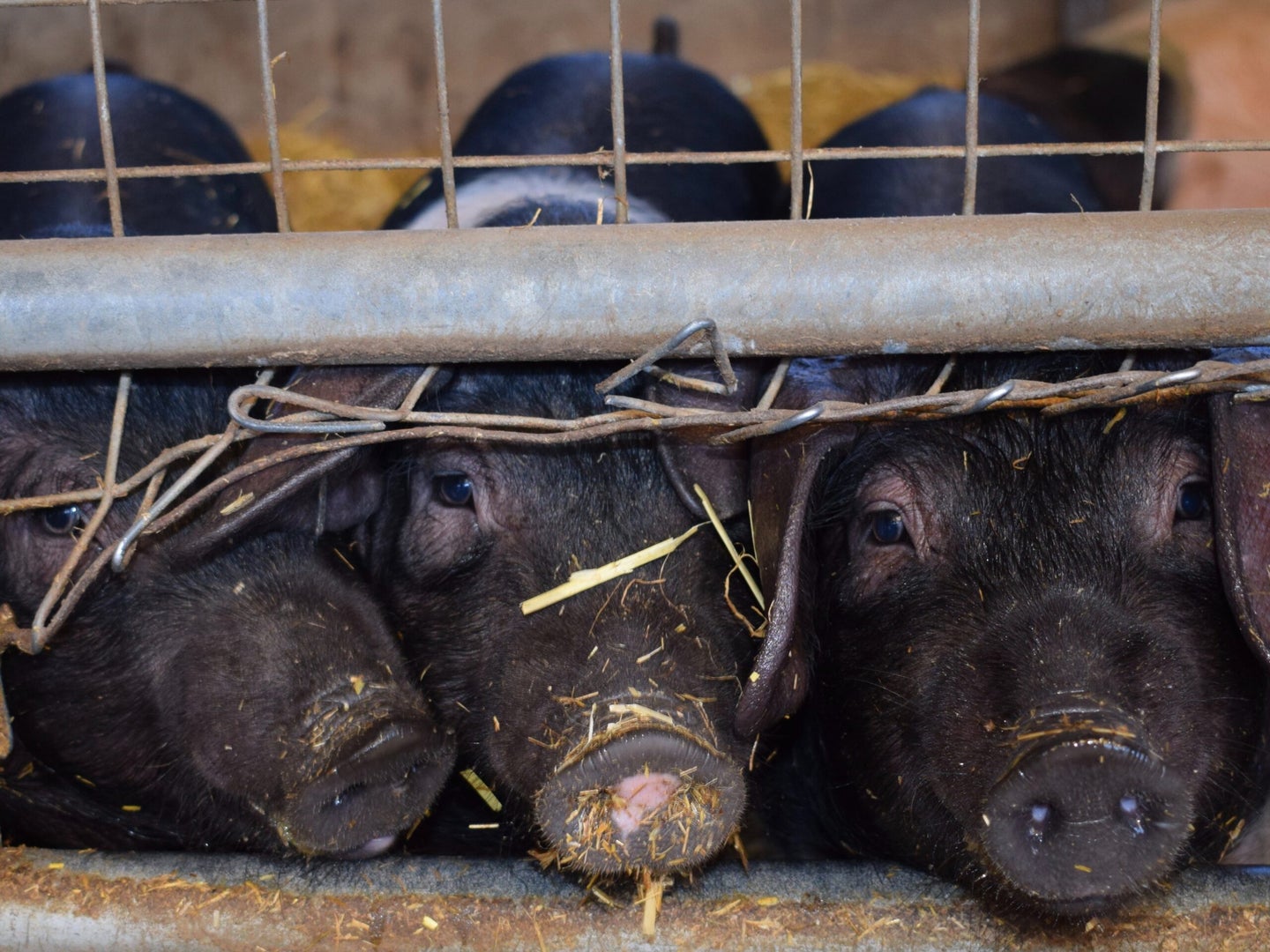 Viruses grow and evolve in many animal hosts, and pigs allow them to become especially dangerous. Unsplash
SHARE

We first learned about COVID-19 when headlines proclaimed that the virus was already spreading like wildfire amongst humans. But what if there was a way to catch these viruses before they become efficiently transmissible between humans?

In a study published last month in Proceedings of the National Academy of Sciences, scientists presented a way to do just that. By closely surveying the movements of a new strain of swine influenza in pig farms, they hoped to gain insight into the ways we can catch a virus before it wreaks havoc on the human population.

Along the way, the scientists uncovered a new swine influenza virus called G4. It’s a blend of three existing viruses—avian influenza, the swine influenza responsible for the 2009 pandemic, and another North American swine influenza that’s a hodgepodge of genes from avian, pig, and human viruses. The blending of these viral genes, called genetic reassortment, is more common than you might think. Any virus whose genetic material is made of RNA, such as influenza and the novel coronavirus, has evolved this powerful evolutionary tool. When different influenza viruses infect a single cell, they blend segments of their genes together and form a new virus—one that often has more capacity to make the jump from animal host to human.

And that’s exactly what’s happening in the pigs scientists worked with for this new study. They huddle in close proximity with one another in pens, but pigs also constantly come in contact with birds and humans. “There are wild birds that have access to the pigs,” says Angela Rasmussen, a virologist at Columbia University. “Those pigs are then in contact with humans working in the farm.” Exposed to both human and bird viruses, the pigs become “mixing vessels” for these viruses, resulting in the formation of a patchwork virus like G4.

So should we be worried about this virus becoming rapidly transmissible among humans? The study itself isn’t a proclamation that another pandemic is on its way, says Martha Nelson, an evolutionary biologist at the National Institute of Health. “It’s a virus that has all the hallmarks of a virus capable of jumping from pigs to humans,” says Nelson, but there’s no evidence of human-to-human transmission right now. “I think the key is that it’s something to pay attention to.” While the G4 virus has infected several swine workers, it hasn’t yet been transmitted from one human to another. And that’s an essential distinction. “It’s hard to say [if] we should be worried about this particular strain,” says Rasmussen.

Nailing down this novel virus’s trajectory wasn’t easy. From 2011 to 2018, across ten provinces in China, scientists analyzed 30,000 nasal swabs collected from pigs. They ended up isolating 179 different swine influenza viruses—and found that in the years after 2016, the majority of these viruses were G4. It had quickly become the dominant version in all ten provinces.

Though it’s widespread in these animals, if it ever did jump to humans, it would be a doozy. The recombined virus’ segment of the avian influenza genome poses an enormous risk, as humans have very little known immunity to it. Additionally, the inclusion of that same swine influenza strain from the 2009 pandemic, which spawned nearly half a million confirmed human cases, makes G4 even more adaptable to infecting human cells.

Long story short, we shouldn’t sit back and relax just yet. To prevent yet another virus from spreading under our noses, these scientists call for real-time surveillance of these pathogens. By monitoring our livestock populations, particularly pigs, we can reduce the risk of another virus making that dreaded jump from animal to human, and eventually human to human.

A game of chance

Monitoring Earth’s pig population, however, is no easy task. For example, China is home to 310.4 million pigs—nearly half the world’s swine population. With influenza’s power to reassort within pigs, the possibilities are endless. “You can have multiple genomes swapping entire parts of their genome to make new chimeric viruses,” says Nelson.

Any country raising enormous populations of pigs, such as the US and Brazil, increases the risk of these cesspools of viral genetic reassortment—endangering swine workers, who then become carriers of the virus to the rest of the human population.

Pigs are one of the most common carriers of human-adaptable viruses, along with birds and bats, not just because of their vast populations—but because of their biology. The cells lining their respiratory tracts are extremely similar humans’. Pigs have receptors for both avian and swine/human influenza viruses on cell surfaces in their upper respiratory tracts, called sialic acid receptors. “If a bird virus gets into a pig, and it adapts to the pig’s sialic acid receptors, that means it may be more efficient at infecting a human,” says Nelson.

Plus, the virus is very vulnerable to mutations, which give rise to the random changes that might make a virus adaptable to humans. The influenza genome is made of RNA, single-stranded genetic code that’s extra prone to making mistakes. While DNA comes with enzymes that act as spell checkers during gene replication, RNA completely lacks these tools—thus giving rise to many more mistakes, or mutations, in the genetic code. “If you make a typo, that typo doesn’t get corrected,” says Rasmussen.

As mistake after mistake trips up the influenza virus’ genetic code, the higher the chance that one unique combination gives rise to a virus that can jump to humans—that is, a virus that has the ability to bind to human-specific cell receptors, then persist and spread within the human body, and transmit from human to human. It’s a game of chance—one that makes it extremely difficult for scientists to predict when the next pandemic is on its way. “It’s like shuffling a deck of cards,” says Rasmussen. “You’ll have different genomes in a virus and it will have unpredictable effects in terms of transmissibility.” That’s what happened with COVID-19—the jump from bats to humans (the mechanisms behind which are still largely unknown) went undetected, only attracting widespread scrutiny once the virus became highly transmissible between people.

How can we prevent the next pandemic?

The line between a transmissible, pandemic-ready virus and a benign one that exists only within the pig population is eerily thin.

“It’s a game of probability,” says Nelson. “As time goes on, it’s more likely that a variant will figure out how to make this jump. There’s nothing that says it couldn’t happen tomorrow or in twenty years. As time progresses and as we have more genetic diversity growing in pigs, and as pig populations grow, it becomes more risky.”

This makes intricate surveillance systems crucial—specifically, that would involve regular viral testing of pig and poultry populations, as well as the humans who work closely with these animals. That means programs that actively monitor viruses, and limiting exposure to poultry and swine are essential for nipping the next pandemic in its bud, says Chad Petit, an assistant professor of virology at the University of Alabama at Birmingham. “Awareness and preparation is really what’s key to being able to see a potential pandemic before it comes.”

Rasmussen references the work done by scientists in the aforementioned study, claiming that the project they conducted—visiting pig farms, conducting lab analyses of thousands of pig nasal swabs—can be an example for other countries to follow. “You need to do experiments in the lab to show that these viruses have the potential to spread to human cells, we need to go out and potentially sample people who might have been in contact with the animals. It’s a lot more than doing surveillance.”

“There will be more pandemics,” says Rasmussen. To stop one in its tracks before it even begins could save many lives.