An Arms Race of Microbial Proportions 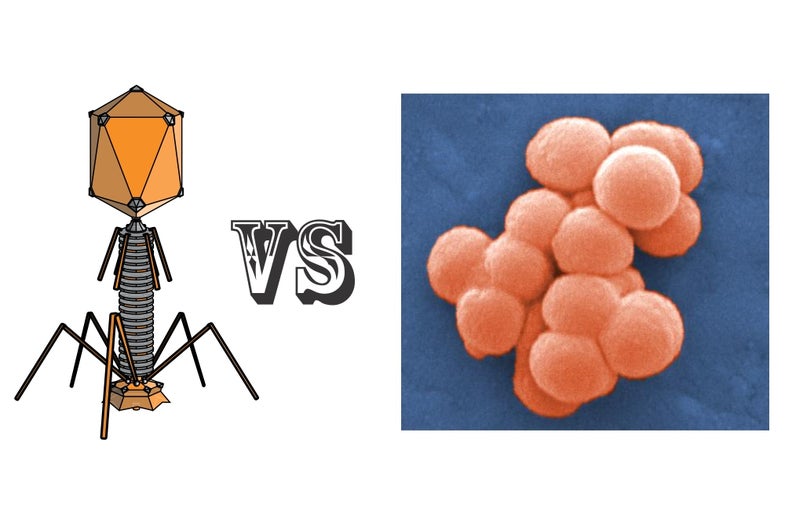 All over the world, bacteria are faced with the impeding threat of doom from a group of small invaders known as bacteriophages. These viruses of bacteria continually seek out their targets and through a direct invasion of the cell cause an internal nightmare that inevitably leads to death.

But some bacterial species have a way to fight back. They have within their genome an area called the Clustered Regularly Interspaced Short Palindromic Repeats or CRISPR region. This area acts as a microbial immune system and can fend off an invading phage. It was originally found in Escherichia coli but its presence has been seen in a variety of bacterial species as well as the Archaea. For them, this small area of the genome offers protection against their worst enemy.

The function of CRISPRs is relatively simple. When a phage enters the bacterial cell, piece of its genetic code can be trapped by host proteins and incorporated into the CRISPR site. At this point, these sequences are transcribed into RNA, which can bind to the invading virus’ genetic material, blocking it from being able to further the infection. Then, specialized proteins recognizing the CRISPR come in and degrade the entire complex. The threat is neutralized and the host is saved.

What makes the CRISPR system so beneficial, however, is its ability to expand and memorize. For each new entry of a phage, a different CRISPR sequence can be implemented such that the virus is stopped and killed. Once the initial infection has been removed, any future phages wishing to cause harm will also be nullified. In effect, much like the human immune system, the bacterium gains an acquired immunity against the virus.

But while this system can offer great protection against virus attack, it is only useful if the phage is similar enough to be recognized by the immune response. Viruses can evolve relatively quickly and can eventually figure out how to evade the bacterial defenses to once again take out its victim. The result forces the bacteria to once again use the CRISPR system to block the attack. As time goes on, an arms race develops in which the slowest to evolve ends up losing.

Last week, an American team of researchers explored this back and forth between bacterium and phage over time. They intended to explore the evolution of both parties to determine if this was an endless battle or if eventually one would come out the winner. What they found opened their eyes to the extent of warfare conducted and how the battles can go one for months without end.

The team focused on Streptococcus thermophilus. It’s a bacterium known to be involved in fermentation particularly in the production of yogurt. It also has an efficient CRISPR system in place. As for the phage, they used a strain known to activate the immune response. The two were mixed together and the battle ensued. At regular intervals, samples from the field – or in this case the tubes – were taken in order to examine the genetic sequences of the phage and also the CRISPR regions.

As the battles proceeded, the virus and the bacteria continually changed their genetic sequences. For the phage, the changes ranged from minor alterations in the sequence to large genome rearrangements. Yet, each time a new version appeared, the bacteria would eventually figure out a way to protect the cell. Eventually, the phage ran out of options and succumbed to bacterial immunity.

In all cases, the viral titre dropped and eventually disappeared. The larger size of the bacterial genome and the seemingly endless ability to develop CRISPR-mediate defenses was too much. Yet, the battle in some cases kept going for a period of 232 days. In the context of this bacterium, which has a generational turnover every 30 minutes, this represented over 10,000 generations. In the human context, this would equate to about 200,000 years.

The information gained from the experiments reveal just how difficult removing a viral threat from a population can be. Even a phage, which has a very small genome, can persist for thousands of generations without any sign of slowing down. What makes this even more incredible is that it all occurred in a controlled environment where there was only one phage and one bacterium. In the real world where species are highly abundant, the potential for crossover and recombination between different strains could elongate this battle for eternity.