How Safe is the Hudson? 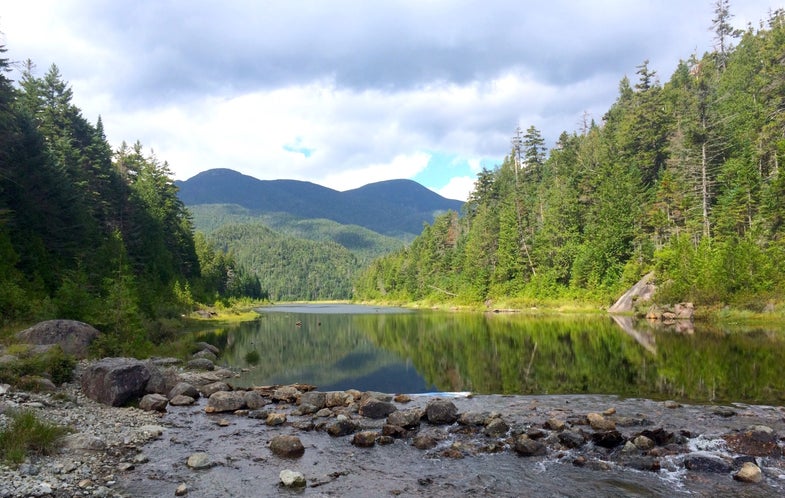 It’s a question scientists often hear along the Hudson River as it flows from the Adirondacks to New York City. Can I swim in the river? Fish in the river? Will my kids get sick if they play in the water?

There are good reasons to worry. The Hudson has a sordid past, and sections of it still frequently register fecal contamination levels many times beyond the limits considered safe for human recreational contact. There are also reasons for optimism, though.

In August, a team of scientists working with the non-profit Riverkeeper conducted an unprecedented health check of the entire river system, starting at the headwaters of the Hudson in the Adirondacks and going all the way to New York Harbor, where the river meets the ocean. They released their results today, giving the 315-mile-long Hudson River a spotty but mostly positive health report with some important insights.

Marine biologist Andrew Juhl of Columbia University’s Lamont-Doherty Earth Observatory and microbiologist Greg O’Mullan of Queens College took the northernmost point of the project, and arguably the most challenging: they hiked for two days up New York’s highest peak to reach tiny Lake Tear of the Clouds, the source of the mighty Hudson River.

Riverkeeper is celebrating its 50th anniversary this year, and Lamont has been a partner on the river testing team for the past 10 years. But this is the first year that scientists have gone to the source of the Hudson for testing.

Andy Juhl of Lamont-Doherty Earth Observatory and Greg O'Mullan of Queens College test the water quality in Lake Tear of the Clouds, the source of the Hudson River high in the Adirondacks of New York. – Spherical Image – RICOH THETA

The Hudson, Before Human Influence

Lake Tear of the Clouds isn’t much more than a shallow pond surrounded by pine forest, but the water is crystal clear. At one end, Feldspar Brook gurgles downhill on its way to becoming the Hudson.

“When we collect samples further south, we have what would naturally be in the river plus the signal of all the impacts from human activities along the way” Juhl said. “Up in the Adirondacks, we just have the natural signal, so it gives us a baseline for comparison.”

The scientists’ primary target for testing was Enterococcus, a bacteria carried by warm-blooded animals. In water, it is an indicator of fecal contamination, which can carry pathogens that make people who contact the water sick. Juhl and O’Mullan also tested the water’s oxygen concentration, nutrients, temperature, pH, and turbidity, and they prepared samples for measuring chlorophyll to see how much algae was present and DNA sequencing to study the types of microorganisms found in the water.

The river was close to pristine conditions at its source, with no detectable Enterococcus, Juhl reported. Downstream, near an old iron mine site from the 1800s, the scientists detected Enterococcus at approximately 12 per hundred milliliters, still well below the 61 per hundred milliliters limit considered the cutoff for safe swimming based on the U.S. Environmental Protection Agency’s Beach Action Value recommendations that Riverkeeper uses. Such low counts could have come from wildlife, Juhl said.

Within the Hudson, fecal contamination doesn’t usually get transported very far from its source. It also dilutes as it spreads, and the organisms eventually settle to the bottom or die, Juhl explained. That means the river may be contaminated in one area but safe for swimming 10 miles away, and those levels could change a few days later. This high level of variability creates a need for frequent and widespread sampling, so Riverkeeper and the scientists test the tidal portion of the Hudson River, from New York to Albany, monthly from May through October and post the results.

To reach the source of the Hudson River, Andy Juhl and Greg O’Mullan hiked for two days in the Adirondacks, crossing Hudson River tributaries like Herbert Brook on the way. Credit: Lamont-Doherty Earth Observatory

Tracking Down the Source

Flagging dangerous levels of fecal contaminants is the first step. Figuring out the source of the contamination is much harder.

In populated rural areas, contamination from livestock and septic systems can get into the river, most commonly along tributaries. In more urban areas, stormwater runoff and overflow from sewage treatment plants become the problem. A glance at Riverkeeper’s data over the years shows a frequent connection between rain storms and fecal contamination washed in from fields, streets or sewage overflows.

Juhl and O’Mullan are working with Riverkeeper and the U.S. EPA on a pilot study on the Wallkill River, a tributary that flows through New Jersey and New York on its way to the Hudson, to try to pinpoint sources of contamination. Their test results can provide clues. Contamination accompanied by medicines or caffeine, for example, would only come from human sources. DNA tests, meanwhile, can help identify microorganisms that are from livestock or wildlife or that live in pipes.

“Every sample taken is a vote for clean water,” said Dan Shapley, manager of Riverkeeper’s Water Quality Program. “We’re not only helping to fill a data gap by reporting to the public information about when and where it is safe to swim, but also demonstrating that people care deeply about the health of the streams and creeks that run through their communities.”

From ‘Industrial Sewer’ to Swimmable River

The Hudson has a long history with industrial contamination as well, including PCBs and heavy metals. Their risks tend to be longer-term, with ingestion over time contributing to illnesses and cancer risk. This Riverkeeper health check focused on shorter-term risks — the kind that can make you sick within days if you contact the water.

Riverkeeper’s latest maps of Enterococcus counts have only a handful of red warning markers, primarily along the tributaries. It’s a big change from the 1960s and `70s, before the Clean Water Act pressured New York and other cities to improve their sewage treatment, Juhl said. “In the 1960s, the Hudson was an industrial sewer. Towns up and down the Hudson River Valley were putting their sewage into the system with minimal treatment. It was probably never safe to swim,” he said.

The Clean Water Act made it illegal to discharge pollutants from pipes or ditches into navigable waters without a permit. It took over 30 years as cities slowly complied with the act for the Hudson to reach its current state, and the river still has bad days.

It’s those bad days that make regular water testing necessary. Juhl estimates that about 20 percent of the samples he has taken over the past 10 years showed high levels of contamination.

“The improvements we’ve seen over the years in the Hudson River are a nice example of where environmental quality and public health have been improved, and at much lower cost than originally anticipated. And it went hand-in-hand with tremendous population growth and economic expansion,” Juhl said.

The trip to the Hudson’s source changed Juhl’s perspective of the river in another way. “I hadn’t appreciated what a fun little mountain stream the Hudson starts out as,” he said. “Super-clear, cool water running over the rocks, and it makes that sound like laughing. It’s so different from the Hudson River we see in New York City. Even if people only take this opportunity to look through some of the images we collected during our trip, I think it could change their own perspective of what the Hudson river is like now, and what it could be in the future.”