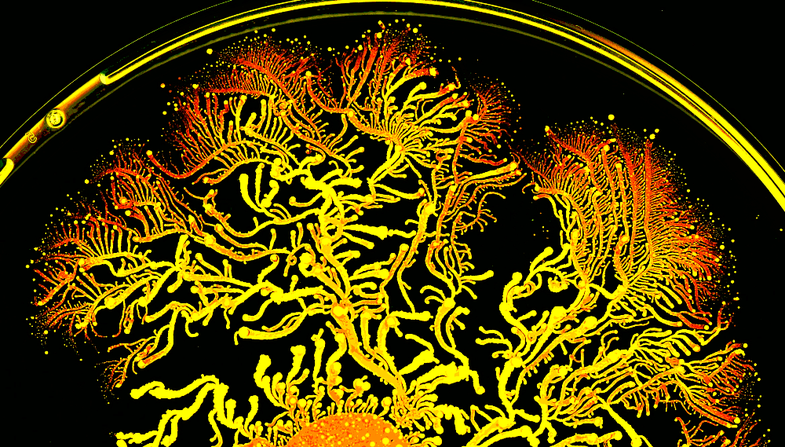 For motile bacteria, moving from one environment to another is a gamble. There’s no guarantee the place will be hospitable; more likely than not there will be stressors in place. Some may be physical in nature but others could be chemical threats. One such source of trouble is an antibiotic.

The presence of antibiotics in the environment is common and not because of human or agricultural use. They are made by a large number of microbial species and used to protect their territory. This can spell disaster for any microbial species wanting to either make a change in residence or to swarm out and increase its biofilm.

Take Paenibacillus vortex. It’s a swarming bacterium, meaning it has the ability to travel thanks in part to a flagellum. The actual distance traveled is about 1/5 of an inch every hour (that’s equivalent to about a mile and a half in human terms). Over the course of a few days, enough distance could be made to introduce an entirely new set of circumstances. If an antibiotic happens to be in the area, it could mean a rather bad end to the journey.

But this species has figured out a rather ingenious way to protect itself during these voyages. It carries baggage when necessary. More specifically, it takes a cargo of antibiotic resistant bacteria. As an international team of researchers showed last week, safety during travel can be ensured.

The team performed what they called cargo transport assays. An equal amount of P. vortex and another species, such as an antibiotic resistant strain of Escherichia coli, were put onto an agar plate containing an appropriate antibiotic. They left the bacteria for 18-25 hours in an incubator and then returned to see if there was any evidence of swarming. They also tried this with several other environmental bacteria to see if this was specific to E. coli or could be achieved with any species.

The results were shocking. P. vortex has the ability to hold onto its living luggage for several inches. There appeared to be no letting go either; the distance was only limited by the size of the petri dish. The process was even more fascinating as swarming would stop moving forward and wait for the E. coli to neutralize the antibiotic. Higher levels of antibiotic meant slower progression but it was never ceased.

There was more to the story. As the experiment progressed, two populations of P. vortex were formed. There were the journeyers, who took along the E. coli and then there were the builders, who had no need for the excess baggage. As soon as the journeyers had cleared the area, the builders could come in to establish a colony. Essentially, the bacteria were acting in the same way as human pioneers.

As for those areas where antibiotics were not present, P. vortex let go of most of its luggage. Some were kept by lagging cells as a precautionary measure but for the most part, the journeyers had no need for the excess baggage. This practice was considered to be a bet-hedging strategy whereby the forerunning bacteria chose travel over caution. If they met an untimely end, those trailing behind would still have the cargo to take care of the situation. This ensured a defense mechanism in place should the environment become toxic yet again.

Although this experiment revealed a fascinating aspect of microbial growth in the environment, the authors did suggest there was a clinical relevance. The ecological movement of antibiotic resistance via this route may allow for increased spread of resistance genes across wide areas. When clinically relevant strains of resistant bacteria were tested, they also spread. They would go along for the ride and then end up getting dumped in a new location. This offered the opportunity to start satellite colonies. This happened not only for E. coli but also for other species as well.

This microbial win-win situation could end up causing trouble in healthcare. While P. vortex has not been isolated in these facilities, other related swarming species have been found and may make up part of the general microbial population of a facility. If they are there and have the chance to swarm, they can spread antibiotic resistance. Should this be the case, this bacterium may need to be targeted by infection prevention and control experts to ensure these cautious bacterial travelers don’t end up harming human health.