The newly discovered asteroid could collide with Mercury or Venus in the future. 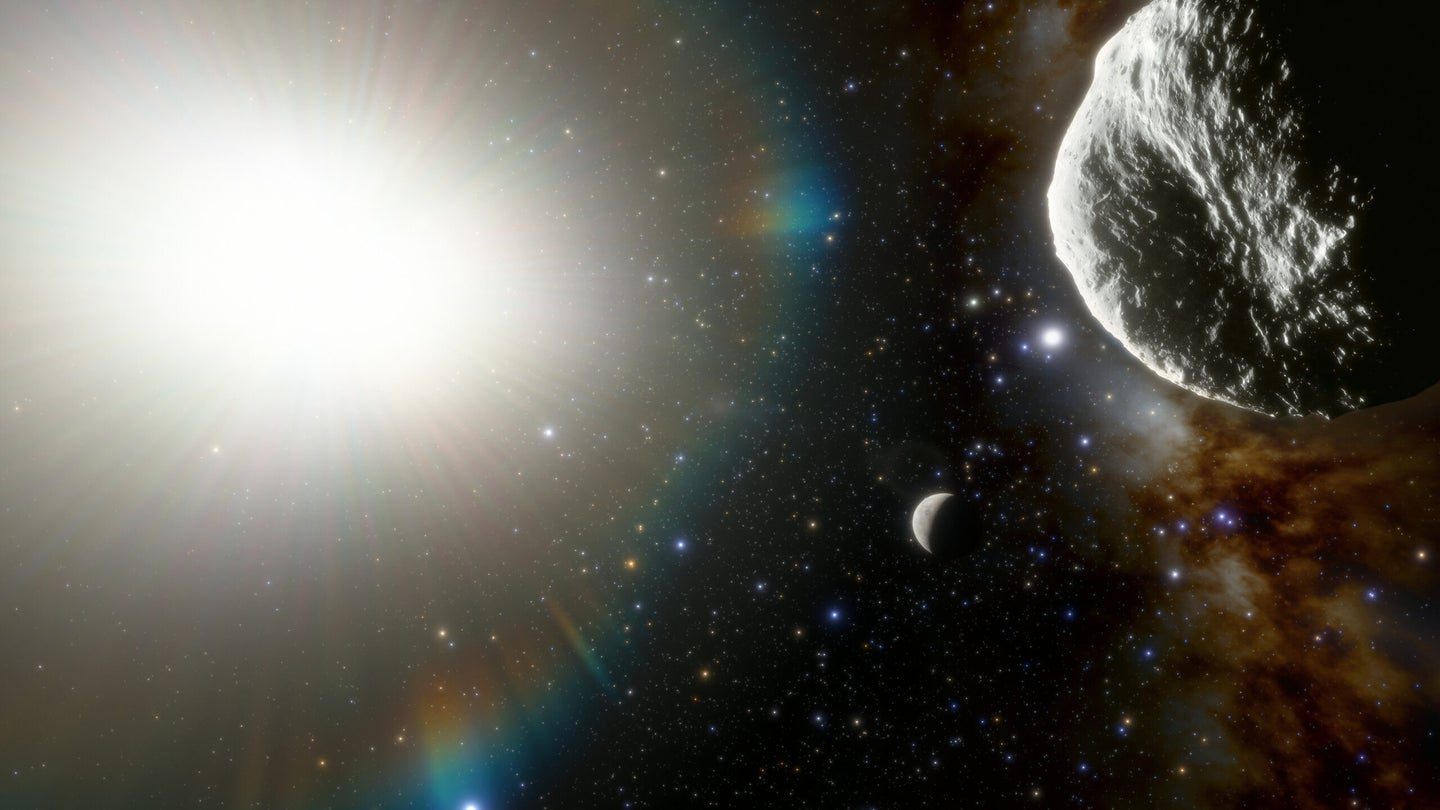 The fastest asteroid in the Solar System has been discovered (illustrated at top right) at NOIRLab’s CTIO using the powerful 570-megapixel Dark Energy Camera (DECam) in Chile. CTIO/NOIRLab/NSF/AURA/J. da Silva. Via Spaceengine
SHARE

Astronomers have announced the discovery of the fastest orbiting asteroid ever spotted in our solar system. Dubbed “2021 PH27,” the little asteroid laps around our home star in less than four months.

2021 PH27 is just 0.62 miles (or 1 kilometer) in diameter and completes its orbit in just 113 Earth days—a shorter orbit than any other known asteroid, though longer than Mercury’s 88 day cycle. The space boulder was first discovered on August 13, while astronomers were collecting images from the Víctor M. Blanco 4-meter Telescope at Cerro Tololo Inter-American Observatory in Chile. In between studying galaxy clusters, the scientists used breaks to search for asteroids. When they spotted 2021 PH27, the team was determined to follow its orbit—even pushing back their scheduled observations for their other research.

“Though telescope time for astronomers is very precious, the international nature and love of the unknown make astronomers very willing to override their own science and observations to follow up new, interesting discoveries like this,” research leader Scott Sheppard, an astronomer at the Carnegie Institution for Science, said in a statement. The work was reported to the Minor Planet Center.

2021 PH27’s orbit lies fully nested within Earth’s own, but it does cross paths with the orbits of Mercury and Venus. Its orbit is also elliptical and unstable, and will likely eventually either collide with Mercury, Venus, or the sun in a few million years—or get thrown off on a different course altogether.

The space rock also gets extremely close to the sun, reaching a proximity of just 12.4 million miles (about 20 million kilometers)—for comparison, Mercury gets as close as 29 million miles. Such a close proximity means that 2021 PH27’s surface at times burns up to 900 degrees Fahrenheit (500 degrees Celsius).

The asteroid’s short distance from the sun is also likely the reason no astronomer had ever detected it before. “Because the object was already in the sun’s glare and moving more toward it, it was imperative that we determine the object’s orbit before it was lost behind our central star,” explained Dave Tholen of the University of Hawaii in another statement. Tholen measured the speedy asteroid’s position in the sky and predicted where it would be the night after the initial discovery. “I surmised that for an asteroid this size to remain hidden for so long, it must have an orbit that keeps it so near to the sun that it is difficult to detect from Earth’s position.”

Being in such close quarters with the sun also means that 2021 PH27 really feels the effects of our star’s massive gravitational field. The asteroid experiences the largest general relativistic effects in the solar system, which astronomers detected as a slight skew in its orbit over time.

The fast-moving little space rock has undetermined origins. The team believes it may have been formed in the main asteroid belt between Mars and Jupiter, but got knocked out by the gravitational pulls of different planets that brought it eventually to its current orbit. Alternatively, it could be an extinct comet from the outer solar system that got pulled nearer to the sun when passing the terrestrial planets.

“Understanding the population of asteroids interior to Earth’s orbit is important to complete the census of asteroids near Earth, including some of the most likely Earth impactors,” said Sheppard.