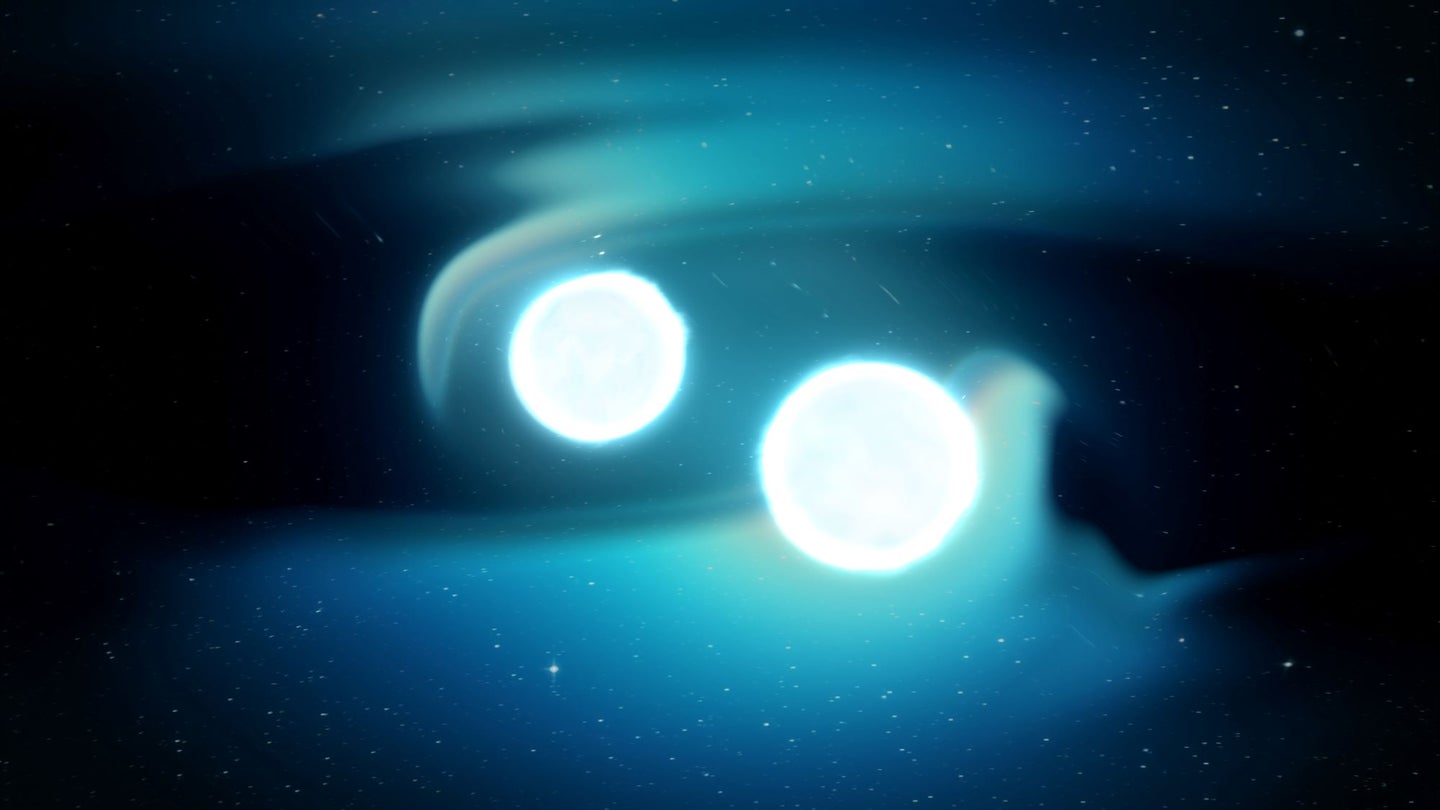 Two neutron stars are on a catastrophic collision course in this illustration. NASA
SHARE

Far from our cozy home in the cosmos, stars are performing violent and extreme acts almost beyond our imagination. Neutron stars, the unbelievably dense remnants of huge stars—a teaspoon of their matter weighs as much as Mount Everest—are smashing into each other. This impact creates black holes and releases extremely energetic flashes of light known as gamma ray bursts (GRBs).

Astronomers have been interested in GRBs since the first one was spotted in 1967. But there’s still much to understand about exactly what goes on when two neutron stars collide. New research, recently published in the journal Nature, reveals helpful signals known as quasi-periodic oscillations (QPOs) in old observations of GRBs. QPOs provide a window for scientists to explore the brief time after the neutron stars collide but before they’ve collapsed into a black hole. They’re the fingerprints of how matter is swirling and mixing together in the merger.

Since the advent of gravitational wave detection in 2016, many astronomers have been focused on exploring neutron star mergers with LIGO and similar experiments. But, those observations provide half the picture, since current detectors are only sensitive to some of the gravitational waves created by the mergers. To detect the higher-frequency waves we’re currently missing, we’d have to wait years—maybe even decades—for new projects like the Einstein Telescope to come online.

This new research shows that existing technology, using gamma-rays, may be an alternative to probe the same physics that creates higher-frequency waves. QPOs, which are wiggles in the observed gamma-rays that repeat semi-regularly, encode information about the physics of the merger. The study authors analyzed two events that produced QPOs of uncertain origin–they may have originated within our galaxy or far beyond it.

“We’re looking at what happens in the split second between the merger of the two stars and the launch of the gamma ray burst. It is almost frustrating that these signals will only be detectable in gravitational waves some 10 to 15 years from now,” says lead author Cecilia Chirenti, a research scientist at NASA Goddard Space Flight Center and the University of Maryland. “But I am impatient and don’t want to wait! It’s exciting that we’re able to start looking for and learning from them now using gamma-rays!”

The collision of two neutron stars is an excellent laboratory for exploring the physics of these weird, dead orbs. Their ultimate fate depends on an important unknown in high-energy physics: the equation that describes what neutron stars are made of and how that material moves, flows, and interacts with the world around it.

“The matter in the cores of neutron stars exists in a state seen nowhere else in the universe, including in laboratories on Earth,” says Cole Miller, astronomer at the University of Maryland and co-author on the study. “Measurements of neutron star properties can give us insights into an otherwise inaccessible physical realm.”

In their search for QPOs, the research team explored archives of data from multiple NASA space telescopes: the Fermi Gamma-Ray Space Telescope, the Swift Observatory, and the Compton Gamma-Ray Observatory. Although these GRBs were identified years ago—as early as the 1990s—the enormous complexity of GRB signals has kept these QPO signals hidden from astronomers until now. “One of my colleagues wryly noted that ‘If you’ve seen one gamma-ray burst, you’ve seen one gamma-ray burst,’” says Miller. “This makes it difficult to tell whether there is some signal of oscillation, or whether that’s just GRBs being GRBs.”

In both events, the QPOs suggest that a mega-sized neutron star may have formed before collapsing into a black hole. Itai Linial, a Columbia and Princeton astronomer not involved with the study, says it is still unclear in general whether a black hole forms immediately or a neutron star appears for a fraction of a second before the collapse to a black hole during a GRB, but agrees these new signals “may be the result of a rapidly rotating neutron star remnant.”

With the detection of these gamma-ray signals, astronomers now have a new tool to explore some of the weirdest and wildest phenomena in the universe. With a treasure trove of old data to explore, the team now hopes to use this tool to find more examples of these curious mergers.