The language you speak changes your perception of time 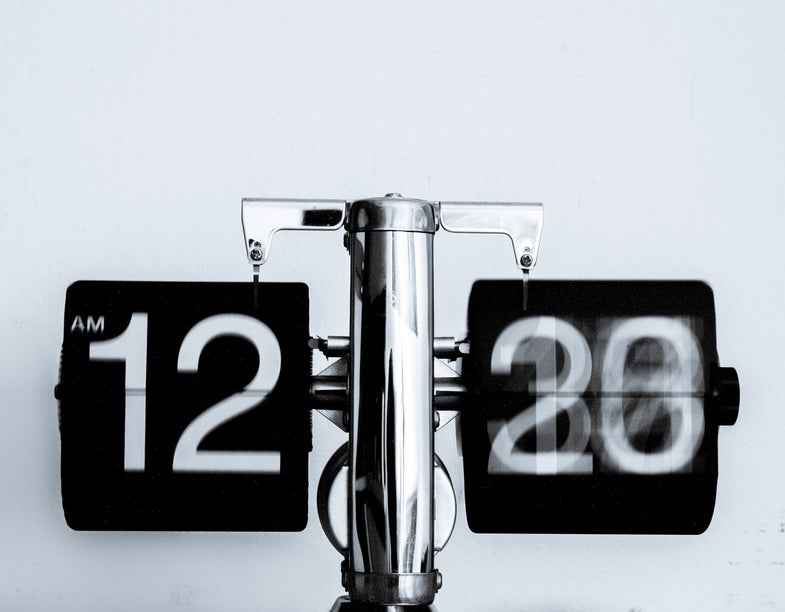 Shortest versus smallest isn’t actually a question of grammatical punctiliousness. Different languages frame time differently. Swedish and English speakers, for example, tend to think of time in terms of distance—what a long day, we say. Time becomes an expanse one has to traverse. Spanish and Greek speakers, on the other hand, tend to think of time in terms of volume—what a full day, they exclaim. Time becomes a container to be filled. These linguistic differences, according to a recently published study in the Journal of Experimental Psychology: General, actually affect our perception of time’s passage.

Since the 1980s, when researchers really began to notice that much of language is metaphorical—we say we’re feeling down when we’re sad, that we’re feeling up when we’re happy—research has examined whether how we talk about abstract things affects how we think of them.

“People tend to speak about time in terms of spatial terms,” said lead study author Emanuel Bylund, a professor of linguistics at Stellenbosch University. “But do we also think about it in spatial terms?”

Participants were instructed in their respective native languages to estimate roughly how much time it took for the lines to grow. Because the visual overlapped with the way Swedish speakers speak about time, the researchers expected that they’d find it tougher to estimate how much time had passed. And they did. While Spanish speakers knew that three seconds had passed regardless of how quickly the line grew, Swedish speakers tended to think that more time had passed when the line was longer at the end of it. There are limits to this: it’s not as if a Swede would think ages had passed if a line grew super long in just three seconds. But in the mid-time conditions Bylun outlined, they struggled.

How do we know that language was the primer, and not some other cultural factor?

For starters, Bylund and Athanasopoulos also ran the experiment using 74 adult, bilingual Spanish-Swedish speakers—and the outcomes held. Those given verbal instructions in Spanish had no problem correctly identifying the time it took for a line to grow, but struggled under the volumetric conditions. Similarly, when instructed in Swedish, the participants struggled with the line exercise, but not with the volumetric one. And it’s important to note that overall, the two groups were roughly equal in the accuracy of their time estimates. Groups suffered in accuracy when the conditions didn’t suit their language, but were equally matched when playing to their linguistic strengths.

The researchers also ran the experiment with no verbal prompt at all: participants simply watched the various animations, and were only asked to estimate length of time after the fact. Without language as a factor, Spanish and Swedish speakers were roughly equal, and mostly accurate in their perceptions of how long it took for the virtual containers to fill. But the two groups were also matched in their inaccuracy of time perception in the line test—even Spanish speakers were worse at the line exercise when they didn’t receive any prompts.

“We’re guessing that it’s an experiential bias related to the fact that when we move through space, the longer the distance we move, the longer it takes,” said Bylund. “Even babies who don’t yet master language seem to have an association between physical length and temporal length. It might be something innate and it might be something that we acquire as experience as we move through space.”

In other words, we may be inherently predisposed to think that longer lengths mean longer periods of time. And Spanish speakers may only overcome that misconception when their language prompts them to think of time in a different fashion. Those results suggest that under the right conditions, language can carry more weight than our physical experiences.

“You know, the question of whether the language we speak influences the way we think, people have tended to approach that question in a very binary way, and our results really show that you cannot say language either influences thought or it doesn’t. Under certain circumstances it does,” said Bylund.

There’s an expression, allegedly Polish in origin, that says if you learn a new language you gain a new soul. Bylund, who speaks three languages, does not go so far. He does note, however, “If you speak two languages, then you can sort of inhabit two world views at the same time, and you can flexibly switch between them. As a bilingual speaker, you can have two different time perceptions. That’s fascinating.”