A brain scientist's guide to fashion. 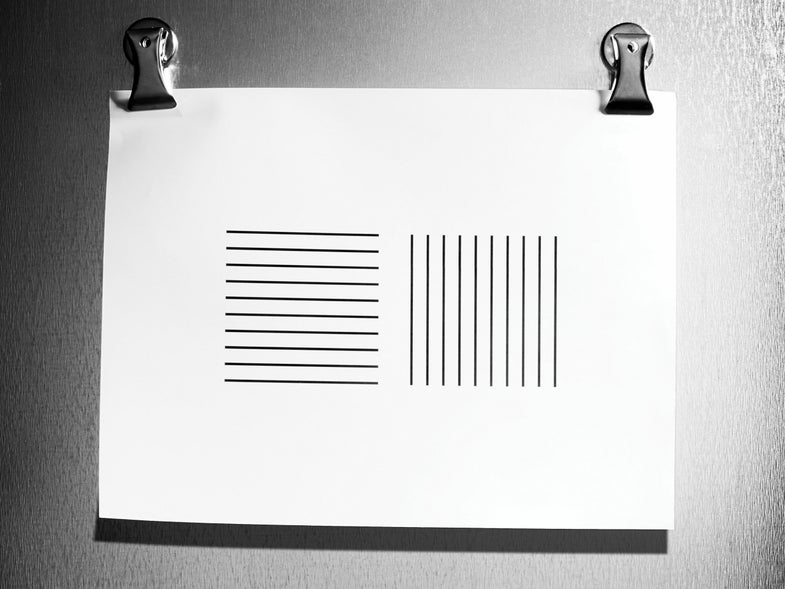 The truisms of fashionistas are ingrained in all of us: Clothing adorned with vertical stripes makes you appear slimmer and taller, while garb with horizontal bands makes you look wider—and perhaps a bit chubby. Except, maybe not. Compare these squares of black and white stripes. The horizontally striped one looks taller and the vertically striped square seems wider, right?

Hermann von Helmholtz was first to note this illusion (now called the Helmholtz squares) in 1867. But he gave little insight into its cause. Even today, neuroscientists have no compelling theories to offer. In his note, Helmholtz did make a brief but compelling ode to fashion: “Ladies’ frocks with cross stripes make the figure look taller.”

His style guide is, in reality, more valid than ours. In 2011, psychologists at the University of York in England tested whether the illusion seen in the 2-D version was also true in 3-D. Two identical female mannequins wore either horizontal- or vertical-striped outfits. The team found that the figure sporting vertical stripes appeared wider; in fact, the one donning horizontal stripes would need to be 10.7 percent broader for the two to visually match up. A reminder that fashion is as much a science as it is an art.