Both require a delicate (and chilly) shipping process. 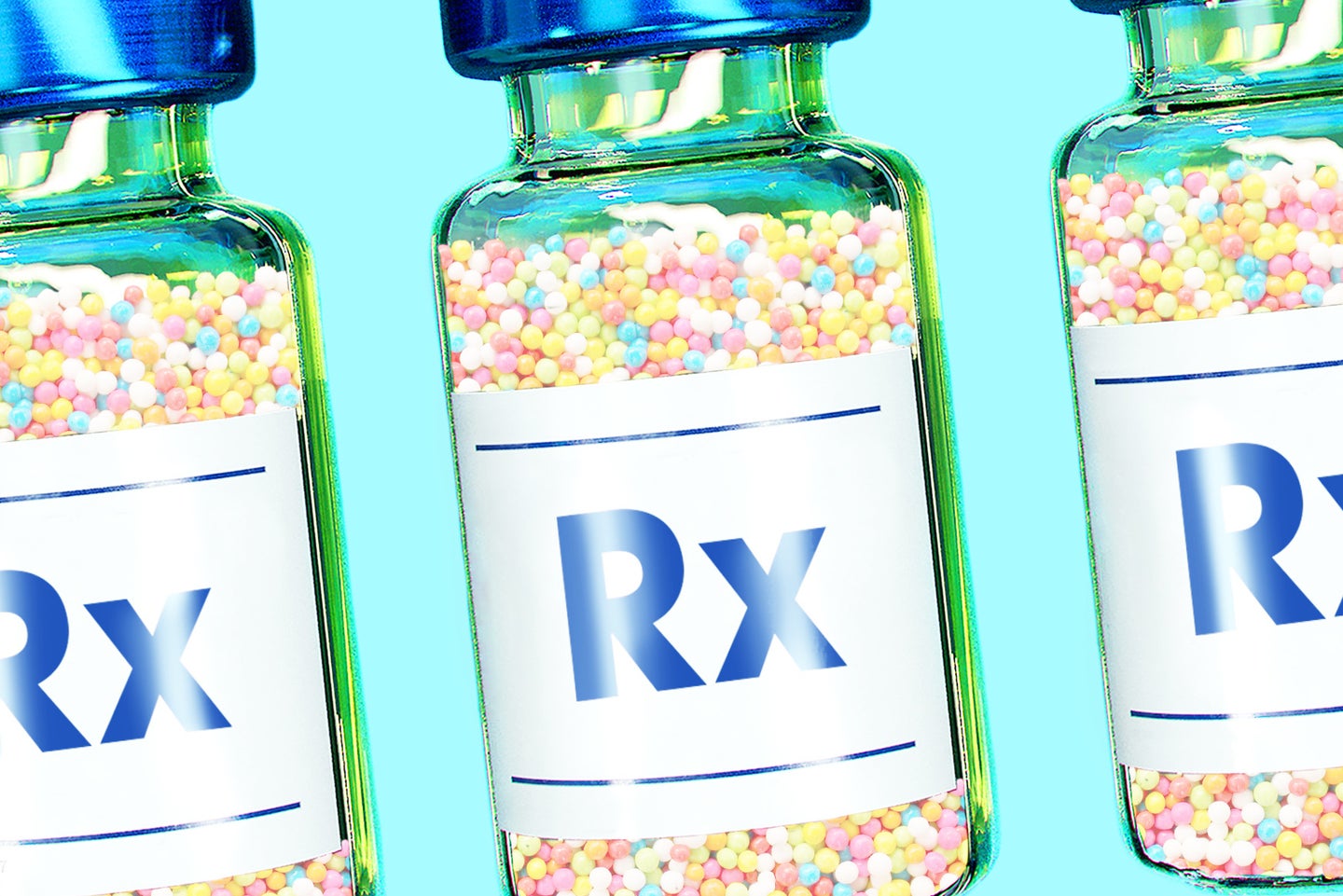 Countless people across the country are desperate to get their hands on the coronavirus vaccine. But the same could be said for another icy treat with some surprising similarities: Dippin’ Dots.

Invented by a microbiologist in 1988, Dippin’ Dots’ self-proclaimed “Ice Cream of the Future” maintains its characteristic beaded form only if stored at -49 degrees Fahrenheit. Slipping even a few degrees in the wrong direction can jeopardize the quality of a batch.

Shipping a coronavirus vaccine is a similarly delicate dance.

The COVID vaccine currently being shipped around the country—manufactured by Pfizer and BioNTech and granted an emergency use authorization on Friday—needs to be stored at -94 degrees Fahrenheit, or else important components can degrade. Another vaccine, made by Moderna in partnership with the National Institute of Allergy and Infectious Disease and expected to get its authorization this week, requires storage and shipping at -4 degrees Fahrenheit.

Keeping millions of doses that chilly is no easy task, and necessitates what manufacturers call a “cold chain”: an infrastructure that standardizes temperature throughout every step of shipping and delivery. Pfizer already has one so-called freezer farm in Kalamazoo and anticipates scaling up with a second in Wisconsin by the end of the year, but such facilities represent just one link in the long chain.

Distributing a coronavirus vaccine is going to be tricky—and it’s also going to be a lot like shipping a container of Dippin’ Dots ice cream. Here’s how the ice cream makers do it, and what vaccine distributors can learn from their chill process.

From dot (and dose) to doorstep

Standard freezers are set to bottom out at 0 degrees Fahrenheit, which is significantly warmer than the temperature Dippin’ Dots have to be stored, according to Dippin’ Dots Chief Development Officer Stan Jones. Still, the company manages to ship their product on a massive scale—while 2020 sales have been down about 50% due to the shuttering of theme parks and stadiums, a typical year sees around 100 million servings sprinkled across the globe.

To understand how they do it, it’s helpful to know how Dippin’ Dots are made. Dippin’ Dots get their small, bead-like shapes from a process called pelletizing. Ingredients—milk, sugar, flavor compounds, and so on—are mixed, and then dripped into a chamber brought to -320 degrees Fahrenheit by liquid nitrogen. The droplets immediately freeze into beads, then move into a -40 degree Fahrenheit freezer with doors that open from the top to prevent as much heat as possible from entering. After quality checks, the ice cream goes into bespoke disposable containers for transport.

Pfizer is also using special packaging: it’s shipping doses in “pizza trays,” each loaded with 195 vials of frozen vaccine. This design choice limits where the vaccine will get sent, says Julie Swann, a health systems expert at North Carolina State University. A minimum purchase order is about 1,000 doses, so given that the aim is to vaccinate as much of the population as possible, it won’t make sense to send batches to rural areas with small numbers of people.

“They probably designed it with the idea that someone would take out an entire tray at a time, and for a mass vaccination clinic, that’s great,” Swann says. “It just is harder when we’re trying to vaccinate priority populations and they are spread out.”

It’s possible that, in time, Pfizer and other pharmaceutical companies will adapt their packaging and shipping techniques to accommodate smaller orders. There’s precedent for another way of transporting a vaccine at an ultra-low temperature without much of an existing infrastructure. To ship the Ebola vaccine, the Bill Gates-funded Global Good developed the ArkTek, a portable thermos that could keep up to 200 vials of vaccine at -112 degrees Fahrenheit.

But for now, those pizza trays are pretty important. Not only do these storage vessels keep their cargo insulated from the elements, they also protect the dots (and drugs) from the stuff keeping them cold.

Jones says the brunt of Dippin’ Dots’ domestic business relies on dry ice, and both Pfizer and Moderna’s vaccines will also use it. Dry ice is the solid form of carbon dioxide, and it’s quite different from the stuff you plop into your soda. Manufacturers create it by subjecting gas with a high concentration of CO2 to intense pressure, then cooling it so it takes liquid form. Some of the liquid re-vaporizes once the pressure lets up, which causes the rest to solidify.

Dippin’ Dots packs dry ice around and on top of its disposable containers, and can go through 14 semi-trailer trucks full of the stuff a week in their typical summer peak. Because dry ice is a frosty -109 degrees Fahrenheit, it’s perfect for keeping an insulated chamber (and whatever sits inside it) cold for a few hours. But using it comes with a few complications that vaccine companies will have to consider.

For starters, dry ice is dangerous. It’s cold enough to cause burns and frostbite when touched barehanded. Additionally, it sublimates quickly into carbon dioxide gas as it warms up. Because carbon dioxide is heavier than oxygen, it can displace the breathable air around you and cause you to suffocate. Jones says Dippin’ Dots workers need special training to safely handle dry ice in enclosed spaces such as the back of a truck, and anyone using it to ship pharmaceuticals will have to follow similar protocols.

A further complication for vaccine distributors to keep in mind is supply. Much of the CO2 gas used for dry ice is itself a byproduct of ethanol and fertilizer. When Americans cut back on driving in the spring, the demand for ethanol decreased; however, it’s now rebounded, so there’s no shortage of raw gas. But that carbon dioxide doesn’t pressurize itself, and there are only a handful of major dry ice producers in the country, according to Jones. Already, some companies have reported bottlenecks and regional shortages. Pfizer has purchased equipment to manufacture its own dry ice, but regional health care systems will also need to source and stock it.

And having a reliable cold chain means having enough dry ice for a rainy day. Once a shipment leaves Dippin’ Dots’ distribution center in Lancaster, California, the company monitors weather and other conditions that can cause delays in transit. In instances where it looks like a shipment’s stock of dry ice will run out before it reaches its destination, Jones says, a third-party company has to intercept and add more. Wastage is an inevitable part of the equation. Jones declined to give specific numbers, but says a small percentage of Dippin’ Dots’ shipments are lost to transit delays.

Vaccines can spoil, too. While Swann says this should not be a sizable issue in the early weeks of distribution, we may start to see doses go bad if officials overestimate demand in a particular region. Pfizer says its vaccine can be stored for up to 30 days inside those pizza tray containers, but that assumes a new batch of dry ice every five days.

Cold chains can’t end with delivery; a vaccine must then be stored on-site in a hospital or a pharmacy until it’s administered. Hospitals and other distribution points will have to decide whether to rely on a constant supply of dry ice or hard-to-get, colder-than-cold freezers.

Since 2012, Dippin’ Dots has sold the ultra-low freezers it uses for storage before shipping to various industries. Vaccine distributors and point-of-care locations, like pharmacies and hospitals, have even reached out to the company about renting equipment, since two of its freezer models would be cold enough for the Pfizer vaccine.

“Several people have been contacting us to purchase these ultra-low temperature freezers, but most of them want to do something on a lease basis, very short-term, because once the pandemic is over and vaccine distribution kind of falls off, they don’t want to have to keep those ultra-low temp freezers,” Jones says. “The problem with that is, those freezers are special duty, and once you put vaccines in them, you really don’t want to go back to putting food products in them.”

Very few medical providers will have ultra-cold freezers on hand to store the Pfizer vaccine, Swann says. Instead, states are scrambling to buy them, and at least half a dozen predict they will face challenges due to limited supply.

Payment is yet another similarity between the operations of a cold chain for Dippin’ Dots and for a vaccine. Consumers pay for Dippin’ Dots’ cold chain in the label price of their ice cream, and even though coronavirus vaccines themselves will be free to Americans, state governments will have to foot the bill for their distribution. Those costs will have to be recouped by removing funding from other programs, Swann says, so they’ll ultimately come out of residents’ pockets.

“The people are going to end up paying for the logistics of the vaccine,” she says. A shot in the arm might not be as immediately satisfying as a spoonful of futuristic ice cream, but the pay-off of a COVID vaccine will be well worth the cost—and the wait.