He was given a clean bill of health, but the virus was still lurking in his eyeballs 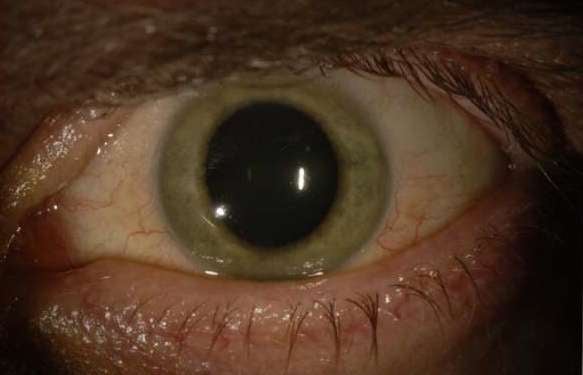 Before he contracted Ebola, both of Crozier’s eyes were blue. Two months after he was told he was cured, his left eye turned green.

Two months after he was discharged from the hospital after a grueling fight with Ebola, Dr. Ian Crozier was back in the hospital with searing eye pain. When doctors looked closer, they were astounded to find cells of the virus still lingering inside his eye. His case we detailed in a report published yesterday in the New York Times.

Crozier is one of many Ebola survivors who have lingering complications that befuddle doctors. Hundreds of people, mostly in West Africa, have chronic pain, headaches, hearing loss, a lack of menstrual periods, and deep fatigue after surviving the virus. Others have blurred vision or varying degrees of vision loss, like Crozier, which is most concerning to doctors. Even for people thought to be cured, doctors are finding that the virus may live on in semen and the inside of the eye for up to nine months after a patient’s life is no longer at risk.

The reason may be due to the fact that these areas are considered “immune privileged,” meaning they are mostly separated from the immune system. Separation from the immune system can be beneficial for the eyes and testicles, because the same molecules that fight off pathogens can actually damage these sensitive areas. However, this potentially makes them ideal places for viruses to linger.

Because the virus was found inside Crozier’s eye and not the surface, it’s not contagious. However, a few new cases of Ebola may have been the result of sexual transmission. Treating these persistent conditions may be hard because of a limited number of specialized doctors, like ophthalmologists, in places that need them the most. But doctors are also doing a bit of guesswork to figure out which treatments might work, and how long the conditions may persist.

Crozier was lucky; with the help of a team of doctors and some powerful antivirals, his vision–and eye color–returned to normal within a few months. The reason his eye changed color is still a mystery, though it happens with some viruses and is often a permanent change. He hopes that his successful treatment will help the hundreds of other Ebola survivors at risk for vision loss in Africa.