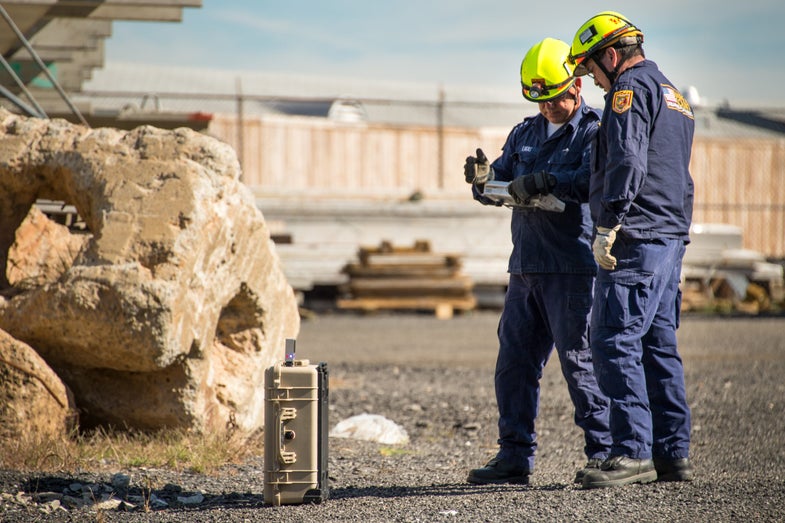 Workers put FINDER to the test at a Virginia training facility in 2013. NASA/DHS
SHARE

Nepal is still reeling from the 7.8 magnitude earthquake that struck near Kathmandu on April 25. The quake has flattened three quarters of the city’s buildings and killed at least 7,500 people. Beneath all those collapsed structures, more bodies await discovery–either to be rescued or given a funeral. If it is to be the former, then time is of the essence. To help out in the search-and-rescue efforts, NASA and the Department of Homeland Security have sent two portable heartbeat detectors to Nepal, and the machines are already saving lives.

About the size of a piece of carry-on luggage, FINDER (which stands for Finding Individuals for Disaster and Emergency Response) uses microwave radar to scan for survivors trapped beneath rubble. It can detect a heartbeat and breathing patterns from a person trapped below 30 feet of crushed rock or 20 feet of solid concrete. It’s sensitive enough to discern the difference between a human heartbeat and an animal’s, as well as someone who’s conscious versus unconscious, which can influence how search-and-rescue workers decide to dig the person out. And it can provide feedback in less than a minute, which is important when there are lives on the line.

Just like radar that tracks airplanes, FINDER emits a signal and waits for that signal to bounce back. The longer the signal takes to come back, the farther away the body is. The trouble is, instead of traveling through air, the microwaves need to travel through the crumbled rocks and twisted metal of disaster debris, so the signal comes back pretty scrambled.

“Isolating the relatively weak signal of a heartbeat within the noisy signals becomes a difficult task,” Edward Chow, JPL program manager, said in a press release. To cut through the noise, FINDER uses some sort of advanced data processing system.

For the first time, FINDER has managed to save lives in a real-world emergency.

In Nepal’s village of Chautara, the FINDER prototypes discovered four men who had been trapped under collapsed buildings. The men had been buried beneath as much as 10 feet of debris for several days.

Though FINDER has been put to the test in various disaster simulations, this is the first time the technology has managed to save lives in a real-world emergency.

A NASA press release says that on May 7, FINDER’s creators will “announce its official transition to commercial enterprise where the devices can be manufactured and made available to search and rescue teams around the world.” Hopefully that means that when the next disaster strikes, more emergency responders will be armed with this life-saving tool.