COVID-19 cases are surging, but not because of Black Lives Matter protests

Social distancing measures by all could have helped prevent increases in coronavirus cases after Black Lives Matter demonstrations. 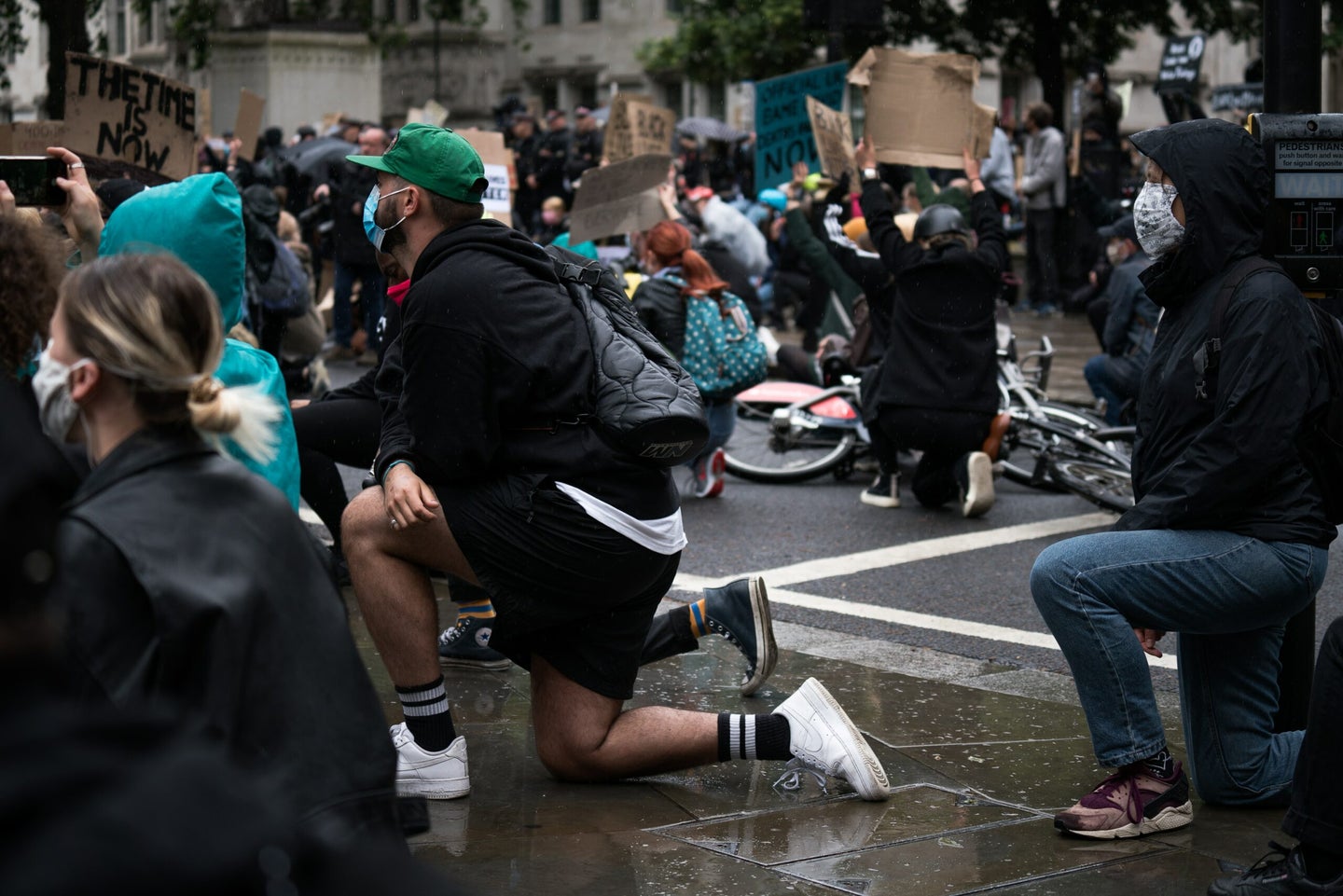 Public health officials’ early predictions that these protests would cause a spike may not have taken into account every factor involved in spreading the virus around. Unsplash
SHARE

Scientists at the National Bureau of Economic Research analyzed the relationship between anonymous cell phone tracking data from cities where Black Lives Matter (BLM) protests occurred and CDC data on new COVID-19 cases. They found that, contrary to what some experts predicted, COVID-19 infection rates actually decreased in places that experienced BLM protests—even when those protests had particularly large showings of people.

Their results are published in a working paper that has not yet undergone peer review, a key step to getting a research study published in a scientific journal. Using anonymized cell phone tracking information gathered by the data company SafeGraph as well as CDC COVID-19 data, the researchers found no evidence that the BLM protests “reignited COVID-19 case growth during the more than three weeks following protest onslaught,” the researchers write, noting that public health officials’ early predictions that these protests would cause a spike may not have taken into account every factor involved in spreading the virus around.

Still, many questions remain, says study author Andrew Friedson, a University of Colorado Denver economist. Although the researchers are able to identify the effect of the BLM protests, they still can’t say who in the city is still getting sick. They also think one potential explanation for why there was no spike in COVID-19 cases could be that more people who were not involved in the protests stayed home than they would have otherwise, fearing police violence or being swept up in the protests.

Friedson and his colleagues’ hypothesis stems from another finding: “In places that were having protests, shelter-in-place behavior was actually going up,” Friedson says. Because protests tended to take place in downtown districts, Friedson says, fewer people were heading to those areas for other purposes, such as shopping.

Certainly, the more than 10,000 people arrested and forced into crowded, violent conditions are at greater risk of catching COVID-19, as are those whose lungs were damaged by inhaling pepper spray or tear gas. But the actions of the other people in the city—who were still largely abiding by stay-at-home orders—could be enough to compensate for that subgroup’s change in behavior.

Among the other issues they face is the fact that CDC tracking information on COVID doesn’t provide data on whether the people who tested positive for the novel virus attended a protest. “We’re not able to ask the question, are the people at the protests getting COVID more frequently [and] are they spreading COVID?” he says. All that the researchers are able to look at is whether the rate of COVID cases is increasing or decreasing in a geographic area near where protests occurred.

“This may be hiding some important reallocation effects of COVID,” he says. An increase in social distancing from folks who didn’t attend protests corresponded with a decrease in social distancing for people who did attend the demonstrations. The group that did attend the protests contained a huge variety of people who don’t map onto one demographic category, so Friedson says it would be nearly impossible to figure out the exact impacts of COVID-19 on the protestors as a whole.

Although it hasn’t yet been through the peer review process, the methods used in this paper are commonly used to study disease spread, says Chad Cotti, a University of Wisconsin economist who recently published a working paper with the National Bureau of Economic Research that looked at the spread of COVID-19 in relation to the Wisconsin primary. “It’s a really well-done analysis, given the constraints of the analysis,” he says. “We don’t have the ability to actually track and trace cases back to the protests … these models are well-established processes for doing this, but epidemiological track and tracing is the gold standard, but you just can’t do that in this case. It’s just not possible.”

Even though the BLM protests didn’t result in a spike in cases overall, says Friedson, that doesn’t mean you should head out and start congregating in big groups over less urgent matters. “If you’re going to have an event, I’d rather you had it outdoors, and I’d rather you wore a mask,” he says, but if possible it is still best to continue social distancing.

Friedson and his colleagues are continuing to follow the impacts of not social distancing in a very different context from the BLM protests: The Trump rally in Tulsa, where mask wearing and other social distancing behaviors were actively discouraged and people travelled from far away to attend.

This story has been updated to remove a line that implied the general public will have information about these results in the next two weeks. Friedson and his colleagues don’t know when the results will be public, or if they will be conclusive.