DNA evidence could soon tell cops your age, whether you smoke, and what you ate for breakfast

Epigenetic markers on DNA can reveal far more intricate details about someone than current techniques. 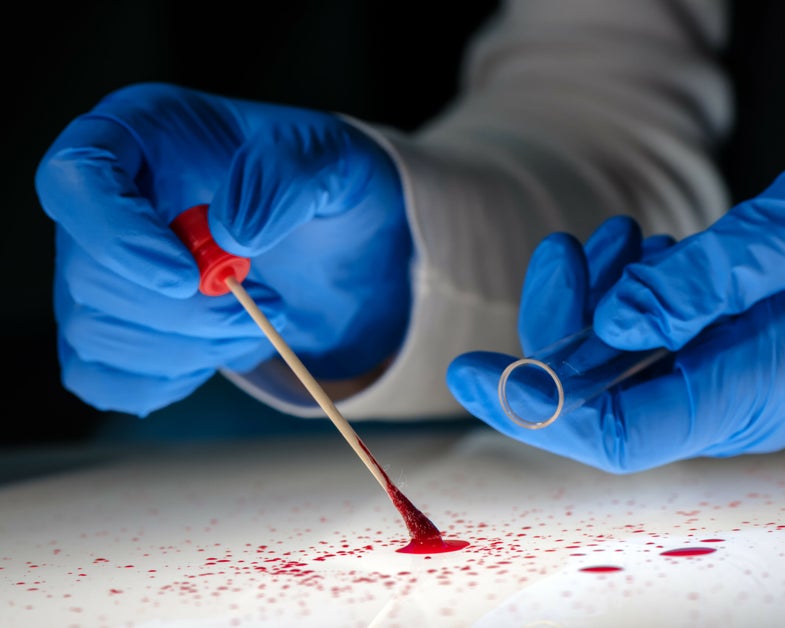 It’s not always easy to correctly identify blood at a crime scene.

That was the case in a murder trial that Bruce McCord, a forensic chemist at Florida International University, served as an expert witness in. A woman was murdered shortly after she went through a divorce, and DNA from her ex-husband was found on her body. But it was hard to tell if the DNA was the result of innocent contact between the two, or if it was incriminating, and came from blood.

“The techniques that we have to detect blood aren’t so sensitive,” McCord says. When the trial completed, he went on a quest to find a better method. “There ought to be tissue-specific markers on the DNA that would be able to differentiate one type from another.”

McCord’s research into that question is part of the burgeoning field of forensic epigenetics, which uses the markers that sit on top of DNA and modify it’s expression, rather than the genetic sequence itself, to gather information that could help identify a suspect in a crime. Forensic scientists and law enforcement agencies around the world think leveraging epigenetics could add key tools to the investigative arsenal. They’re working to develop methods that use this area of study to identify not only the tissue type of DNA that may have been left behind at a crime scene, but the age and lifestyle of the person who left it there.

Research is still ongoing, and the technology needs to be tested and validated to ensure it’s effective and accurate. And as the science moves forward, as with any new tool involving genetic information, its ethical concerns must be scrutinized.

“It’s a fast developing field,” says Athina Vidaki, a postdoctoral fellow studying forensic epigenetics at Erasmus University Medical Centre in the Netherlands. “We need to understand the challenges that come with investigating epigenetic markers, and figure out what we can do, and what we can’t.”

All the cells in the body have the same DNA sequence, and that distinct series remains constant throughout an individual’s life. However, how those genes function—what proteins they produce, in what quantities, and when—is something known as gene expression, and it changes, from body part to body part, and in response to all kinds of environmental factors.

For example, blood cells have a different purpose in the body than skin cells do, so different proteins will appear in unique patterns in both cells to help them carry out their specific tasks.

By identifying these patterns, it’s possible to differentiate between the DNA that came from blood, and the genetic coding that came from skin, McCord says. That strategy, he says, has advantages over the current body fluid identification protocols, including that it can be done with DNA sequencing technology already in place at many forensic labs.

It would be a particularly useful way, for example, to analyze swabs collected in rape kits, McCord says. “If you find male DNA, for example, there’s still a question of if it’s from a skin cell or a sperm cell. Using epigenetics is a more efficient way to approach that question,” he says. In cases where the accused and the victim were in close contact, fluid identification tools could also help determine if the DNA found on a victim came from skin, or from blood or semen.

McCord and his team are collaborating with the San Francisco Police Department to start to validate their methods.

Epigenetic markers are useful not just for determining cell type. They also change as cells age, and the latest research shows that certain sets of markers can be used to predict age within three or four years (above or below) of someone’s actual chronological age. That three to four year buffer is because the way in which our cells age varies among individuals. “Age prediction is really exciting to people in law enforcement,” Vidaki says.

Going forward, epigenetics might also help predict if a suspect is a smoker, if they drink heavily, or even what their diet is. All of these behaviors leave traces, and it might be possible to predict, say, if a person is a long-time vegetarian by looking at their epigenome.

“When someone leaves a sample behind in a violent crime, it’s reasonable to test it and find out as much about that person as we can,” McCord says.

The information isn’t enough to identify a single person—epigenetic markers aren’t fingerprints, and there’s a lot scientists still don’t know about gene expression. But knowing the age range and lifestyle habits of the person that they’re looking for might help law enforcement officers narrow down a suspect pool, in cases where there isn’t a DNA match in a database.

Research is moving ahead quickly, but scientists noted that they’re still working to understand the limits of the methodology: Does it still work on DNA samples that have been degraded in some way, or are only present in small quantities? They also need to make sure that the methods are as effective in all ethnic groups, and that age markers are just as accurate when they’re analyzed from blood as when they’re analyzed from skin. “There are a list of challenges, that limit what we can do, and highlight what we need to do in order to advance the field,” Vidaki says.

In May, a research team from Poland published a letter in the journal Trends in Genetics reporting that the epigenetic markers they were using to predict age could be used for another purpose: to identify that a DNA sample came from someone who had a type of leukemia. That finding raised a key ethical concern — the markers that scientists are using to identify age or tissue type, might also hold potentially sensitive medical information.

“When we do forensic analysis, we’re able to pick up these additional, incidental findings,” says Bram Bekaert, professor of forensic biomedical sciences at Katholieke Universiteit Leuven in Belgium. It’ll be important, then, for scientists and policy makers to decide how much information to extract during an analysis, he says. “There needs to be a discussion around what we can do, and what we can’t.”

Epigenetic markers shift with illness in a way that genetic sequences do not, which makes this ethical issue specific to these methods. However, many of the questions in this area are similar to those around genetic information more generally, says Matthias Weinroth, who studies the ethics and politics of biological technology at Newcastle University. “My usual concerns are, how reliable is the technology, and how useful is it,” he says. “And, how will the information be collected and used? How will it be stored?”

As law enforcement officers start to get their hands on epigenetic tools, it’ll also be critical that they have a complete understanding of the limitations of the data that they collect, and how much it can actually tell them. “When you say it’s a scientific method, people sometimes think that it’s objective, and entirely reliable. But everything is subject to interpretation,” Weinroth says. “The truth is not in the DNA.”

The lifestyle information that can be collected using epigenetics also adds an ethical wrinkle, and it’s important to determine how the collected data should be distributed, and to whom, he says. As with any information, scientists, law enforcement, and policy makers have to weigh the benefits of using data against concerns around privacy.

Those are the types of questions that the various stakeholders need to wrestle with now, as the field continues to develops, Weinroth says. “It’s too late to consider moral and ethical aspects of a technology when its already on the market. We need to engage with it as it emerges.”