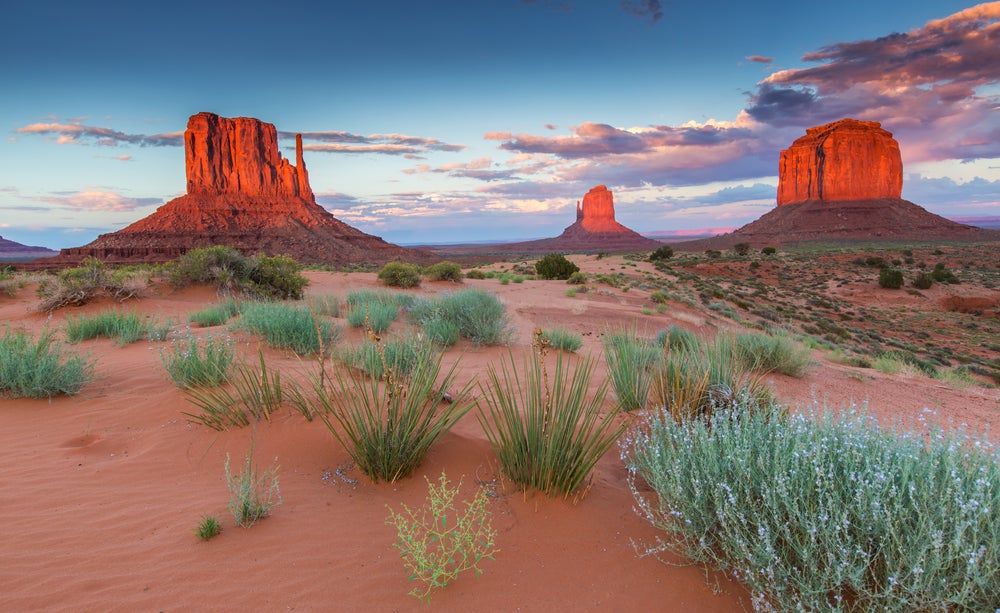 Monument Valley, a popular tourist attraction, lies within Navajo Nation territory along the Arizona-Utah border. The tribal government has closed the park to protect residents and travelers from COVID-19. CTA88/Deposit Photos
SHARE

In the days before Arizona Gov. Doug Ducey changed course by urging people to stay home, Scottsdale city councilman Guy Phillips donned a face covering and shouted “I can’t breathe” into a microphone at an anti-mask rally. His mocking of the last words of George Floyd is only one more example of the racism that seems to shadow the outbreaks of contagious viruses.

That’s precisely what happened 40 years ago with HIV/AIDS; that’s what happened a century ago with the xenophobically named Spanish flu. Today, it’s happening on sovereign tribal lands throughout the American Southwest, where the loathsome relationship between racism and the novel coronavirus is on full display.

Our ethnographic studies include a focus on health care and health policy for the Indigenous people of the U.S. We now know COVID-19 cases and deaths within the Indigenous nations have soared, and are among the worst hot spots in the country. Currently there are well over 7,000 positive cases on the Navajo Nation—which covers portions of Arizona, Utah and New Mexico—where per capita infections quickly surpassed New York and New Jersey in May.

One of the reasons: When Gov. Ducey first let expire his statewide stay-at-home-order, droves of Arizonans returned to life as usual. They congregated in long lines and dined in crowded restaurants. Many were not wearing masks. Fourteen days later, COVID-19 cases began to rise. With that, Arizona lost control of the virus.

Indigenous people already live with existing challenges to health and life. About 18 percent of COVID-19 deaths in Arizona have been Indigenous people, where they account for 4.5 percent of the population. And still Arizonans in border regions actively resist changing their behaviors to curb the spread of disease.

Hispanic, Black, and Indigenous people are more likely to be hospitalized or die from COVID-19 than whites. And although white Arizonans are aware of that, their response, all too often is indifference and sometimes hate. Cities on or near ancestral Indigenous lands and tribal nations may be geographically close, but politically, economically and culturally, they are worlds apart. This racism is common in regions that border tribal lands.

A recent example: In a Facebook post, a 34-year-old white man from Page, Arizona, urged readers to use “lethal force” against Indigenous people because “they are 100 percent infected.” Local police arrested him.

And from April 2016, an even more deadly example of violent policing: a Winslow, Arizona, police officer shot and killed Loreal Tsingine, a 100-pound Navajo woman. The officer claimed to fear for his life because the woman was holding a pair of scissors. After Tsingine was shot, eyewitnesses were not allowed to administer lifesaving techniques that might have saved her. Her body was left in the street until 6 a.m. the next day.

This was not the first time Shipley was the aggressor during his career and, as the current uprising of Black Lives Matter reminds us, Indigenous, Black, and other people of color often die by the hands of police. Leaders of Indigenous social movements sued the federal government and continue to fight for justice.

In March 2020, our research team interviewed 30 non-Indigenous people across the political spectrum about the pandemic. One of our questions: Is anyone to blame for the virus? Responses range from finger-pointing at all of China (the “Wuhan Coronavirus”), to President Trump and “out of control capitalism.” As for “who would suffer the most,” our respondents were consistent. Indigent people of color, they said, are most at risk.

They also discussed a need to physically distance from “outsiders.” Such a response suggests a pervasive idea—that associating with certain groups increases the dangers of virus transmission. One white woman, an outlier, told us that Indigenous people had been “a little slower to adopt the precaution measures … it is easier for them to forget to protect themselves.” The woman now avoids stores where Indigenous people go. Others said much the same thing though usually with concern and awareness. Exposure to friends and family was OK. Interaction with outsiders was more dangerous.

The notion that Indigenous people are “slower” to respond to COVID-19 is false. Tribes quickly and proactively promoted science-based resources and issued emergency executive orders that are updated regularly. The White Mountain Apache Tribe closed down borders early and then again in June, after one-eighth of tribal members tested positive for COVID-19. Donations of hand sanitizing stations and personal protection equipment for Navajo, Hopi, Tewa, and other tribes in the region continue to provide relief.

Challenges to lifesaving procedures came from outside of tribal nations. The mayor of Page, Arizona, for example, posted a social media query to the president of the Navajo Nation in hopes that tourist attractions would open for business. Others responded that Nez, the president, was “busy fighting hard for our people.”

Rather than acknowledging the actions of tribal leadership to save lives, the mayor instead chose to perpetuate the racist trope of “drunk Indians” by writing, “I wish he would battle alcoholism as hard as COVID-19.”

A battle for clean air and water

Before COVID-19, many Indigenous people already feared the inability to breathe. In the Southwest, children on tribal lands have a 60 percent higher asthma risk than non-Hispanic whites. For heat, many families in the Southwest use coal and wood-burning stoves; the particulate matter from them is unsafe for inhalation, and long-term exposure increases the likelihood of death from COVID-19.

Clean water, too, is often inaccessible. More than 500 abandoned uranium mines have elevated radiation levels on tribal lands in the southwest. That means Indigenous people and their livestock depend on contaminated water. Radiation spills, including the Church Rock spill, the country’s largest, continues to contain high levels of toxins. Indigenous miners and their families are also at elevated risk for respiratory problems, including lung cancer, and increased vulnerability to COVID-19.

Tribes partnering with environmental justice organizations and federal agencies are aware of these disparities and they fight to improve science and policy for healthier air and water on tribal lands, but these efforts are an uphill battle. The racism of border town leaders demonstrates why.

In the last few weeks, Black Lives Matter brought national attention to what Native, Hispanic, and Black Americans long knew: We live in a political, governmental, and judicial system that treats Black and brown bodies as disposable. We are governed by a collective mindset that rigidly enforces economic disparity, political disenfranchisement, environmental injustice and extreme policing. The difficult but doable task facing all of us now is to create a future more equitable and just for Indigenous people.