Which Brands Of Hard Drive Are Most Likely To Fail? 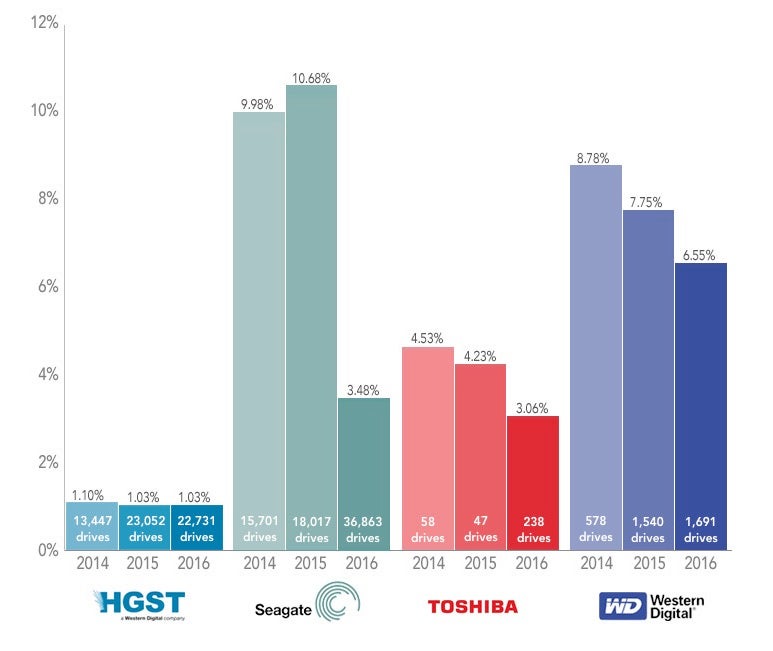 The shelf life for the average drive is about four years, according to research by data storage company Backblaze.

The company’s latest analysis of more than 60,000 hard drives details which brands of drive fail with greater frequency. This isn’t a sweeping investigation of every hard drive manufacturer on the market, but the independent data of one company that buys hard drives in bulk, and buys from the biggest players in the market.

At first glance, hard drive technology seems to be improving. Year over year, the failure rate decreases. The largest improvement was by Seagate between 2015 and 2016, where the rate of failures dropped from 10.68 percent to 3.48 percent, more than half. (It’s also worth noting that the sample size in 2016 also doubled from 18,017 drives to 36,863 drives.)

In terms of the hard drives that are most likely to fail, Backblaze’s data outs Western Digital, which had a 2016 failure rate of 6.55 percent. Over 1,691 drives, about 110 failed.

The drives least likely to fail were made by HGST, a hard drive company owned by Western Digital that isn’t targeted at a consumer market. HGST’s drives also fail at a decreasing rate year over year, with a rate just over one percent. Backblaze says they’d like to order more of these, but the company isn’t able to take orders that large.

Gleb Budman, Backblaze’s CEO, describes the way hard drives fail as a bathtub curve. Hard drives usually fail at the beginning of their lifetimes or at around 4 years old. If they survive past a year, there’s a good chance that they’ll make it the expected lifespan.

Backblaze considers it a hard drive failure when the drive will no longer spin or connect to the computer’s operating system, will not sync with other disks, or displays signs highly correlated with imminent failure.