Apple's redesigned MacBook Air is great, but it occupies a precarious spot in the company's laptop lineup. 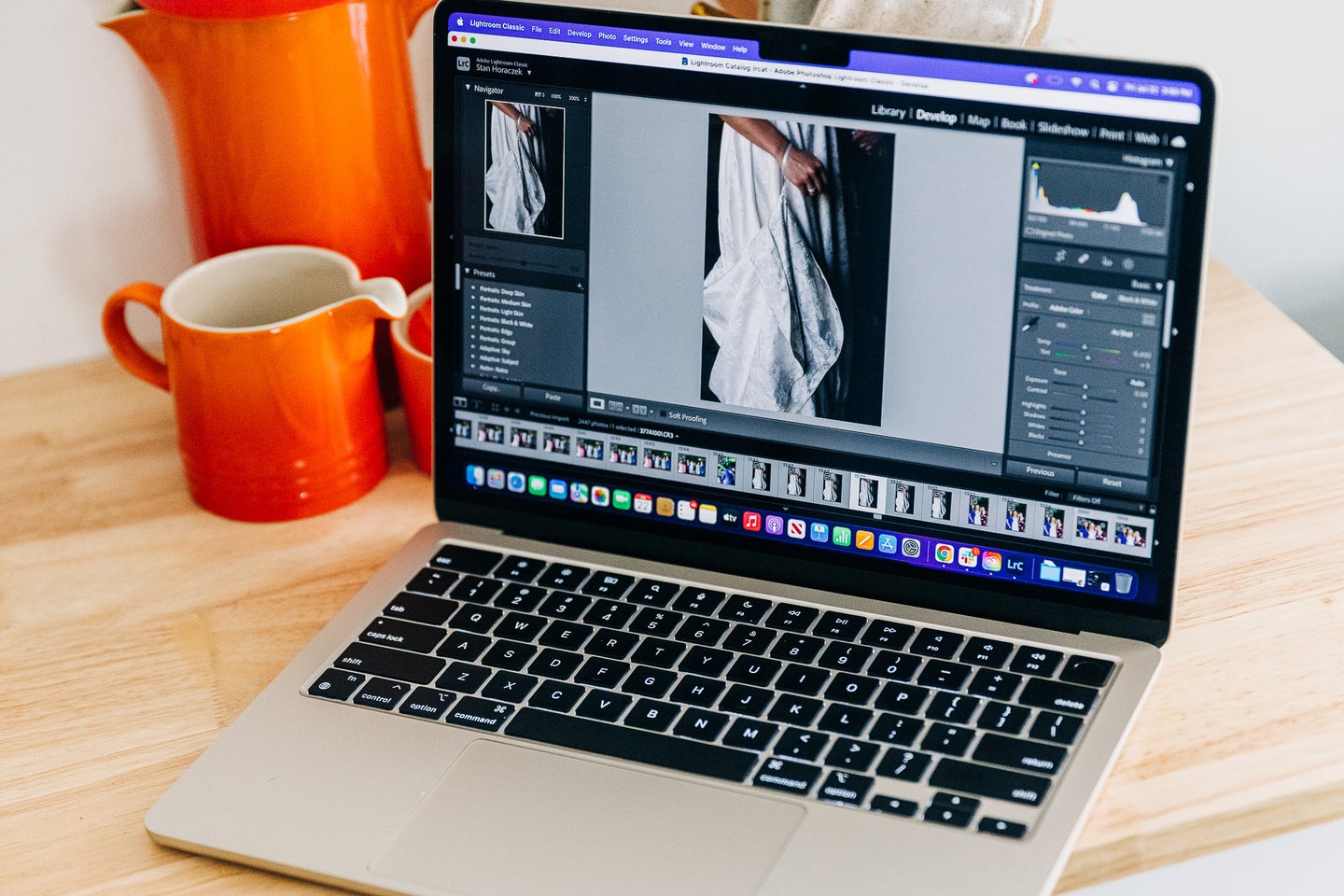 Take Apple’s latest laptop out of the box and it doesn’t immediately scream, “I’m a MacBook Air.” Ditching the well-worn, wedge-shaped design the line has embraced for so long for a more uniform body shape, you might look at it and see a “MacBook Pro Mini.” Or maybe this could count as the “MacBook Air Max.” It also feels like a hybrid of the two Macs, thanks to Apple’s new M2 processor, which packs in more power than an Air has ever offered. The resulting machine is a truly wonderful computer, but the MacBook Air M2’s pricing puts it far above its still-excellent predecessor and within arm’s reach of much more powerful machines. It makes the process of picking out a Mac laptop decidedly more complicated.

The M1-powered MacBook Air I reviewed back in 2020 is one of the best all-around laptops ever. It raised the bar on computers in its class when it came to portability, power, and battery life thanks to Apple’s proprietary silicon. By creating a system-on-a-chip specifically designed for Apple devices, the company created wildly efficient computers. The new M2 chip represents the evolution of that first effort, adding even more power and the capacity for adding more storage and RAM.

The chip in the MacBook Air M2 relies on tech similar to what lives inside the M1. There’s just more of it. The M2 ramps up the total number of transistors to 20 billion; that’s a 25 percent increase over its predecessor. The CPU cores are faster with more buffer and the whole system has gotten a 50 percent increase in memory bandwidth. The M1 was a breakthrough and now Apple has started to refine and bolster it.

The base model offers 8 CPU cores and 8 GPU cores, with 8GB of universal memory (Apple’s M-series equivalent to RAM) and 256GB of built-in storage. It starts at $1,199, $200 more than the M1 Air. For this review, I have been working with an upgraded version that includes the same 8 CPU cores, but steps up to 10 GPU cores. It offers 8GB of universal memory and 512GB of built-in storage. These upgrades push the total price up to $1,499.

The MacBook Air’s new body makes it feel like Apple hit the MacBook Pro with a shrink ray. The Air line’s iconic tapered design is gone—it’s now 11.3mm thick from front to back if you don’t count the feet that protrude slightly from the bottom. Despite the new design, it checks in at 2.7 pounds, which is very slightly lighter than its predecessor. The design is an upgrade in pretty much every way. It feels sturdier despite the weight reduction. It brings it more in line with the other MacBooks in the lineup. Typing even sounds better and feels more satisfying in this cassis than it did before.

The M2 Air also features a new and improved screen. Apple created room for a slightly larger 13.6-inch display by using a smaller bezel than the M1. It’s also brighter, hitting a maximum of 500 nits, which I found to be plenty even when doing work outside in the blaring afternoon sun. The camera notch, which houses an upgraded 1080p webcam, feels more noticeable and distracting than ever, though, particularly compared to the 16-inch MacBook Pro I use every day.

The screen does feel like a tangible upgrade, but I couldn’t help but miss the smooth scrolling that comes with ProMotion, a variable 120Hz refresh rate, in the 14-inch MBP.

I swapped the MacBook Air M2 into my daily routine for roughly a week. That included lots of emails, docs, web usage, and video conferences. I also did fairly extensive photo editing in Capture One Pro and Lightroom Classic. A power outage provided a perfect opportunity to use it for watching movies. On the whole, it’s a great laptop with more than enough power to handle most people’s daily workload.

Under normal circumstances, the M2 Air’s battery endured a full nine- or 10-hour work day with juice left to spare. Even transferring more than 200GB of image files to the built-in storage only knocked 2 percent off the battery life.

More rigorous tasks obviously drained the battery faster. Doing an hour-long outdoor video conference with the screen brightness cranked to its maximum, for example, drained the battery considerably faster than normal activity. But, even with that endeavor thrown into the middle of the afternoon, I didn’t need the charger before logging off for the day.

If you’re comparing the battery life to the M1 MBA, you can expect similar performance. Stepping up to the 13-inch MBP would get you a bigger battery, however, if longevity is the most important thing.

The new Air still only offers a pair of USB-C Thunderbolt ports, but it also adds a MagSafe charging port so you can actually use both of the USBs while powering the laptop. That’s an upgrade at least some of the time.

After using the M1 MBA extensively, I wasn’t surprised to find that the new M2 version swiftly handled everything I threw at it. Regular usage barely taxes the computing hardware at all. Even when I had too many Chrome tabs open (too many for me translates to a few dozen), it didn’t flinch or stutter.

Once I got into my normal photo editing process, things predictably started to get bogged down. I shoot with both a 20-megapixel Canon R6 and a 45-megapixel Canon R5. In Capture One Pro, I could whip through a catalog of 20-megapixel R6 images relatively easily. It handled R5 photos well at the start but the computer itself started to heat up considerably and things slowed down as I pushed through an edit. The MBA lacks an active cooling system (that’s the big difference between it and the 13-inch MBP), so it doesn’t handle heat as well.

Editing 50MB raw image files in Capture One isn’t what this machine was meant for—at least not on a regular basis—but it didn’t totally fold under the load. I tried going through some photos in the native Mac Photos app and the process was smooth and quick, even with high-res files.

I also exported some basic video for social media and played some Magic: The Gathering Arena, both of which went better than one might expect on a 3-pound laptop, but it did slow down considerably as the computer heated up. Extended photo editing sessions took a hard hit once the MBA got warmer.

In short, it’s plenty powerful for most users, even if you plan on doing some occasional photo and video editing or gaming. If you’re only resizing images in Photoshop or sorting jpeg files, then you’ll have no trouble at all. If you’re doing a lot more than that on a regular basis, then it’s worth upgrading to the MBP.

Our review model came with the 512GB storage option, which is the version we would recommend if you’re going to make the leap on the new MacBook Air. Other reviewers have noticed that the 256GB base model offers surprisingly lackluster transfer speeds due to the new storage arrangement. Realistically 256GB simply isn’t enough storage for an everyday laptop, so combining that low capacity with underwhelming speeds makes the base model far less appealing than an upgraded model, especially with the less expensive M1 Air waiting in the wings.

The rest of the features

The more I use the new MacBook Air, the more I find to like about it. The keyboard feels excellent and even sounds good with the redesigned chassis. The built-in four-speaker system borrows from the more advanced MacBook Pro and sounds better than a laptop this skinny has any business sounding.

The 1080p webcam looks better than the 720p model found on the M1 MBA, but it’s still just OK. It gets a little grainy and lacks contrast but it’s still totally acceptable for video conferences. The triple microphone array, on the other hand, sounds excellent. For calls, I consider the audio just as (if not more) important than the camera quality anyway.

So, who should buy the new MacBook Air M2?

There’s no doubt that the MacBook Air M2 is a great computer. In fact, it’s one of the best laptops you can buy right now, bar none.

That said, its pricing makes it expensive for casual users while its specs won’t satisfy power users. Considering the storage performance in the base model, I firmly recommend upgrading to the mid-tier configuration if you’re going to make a purchase, which pushes the floor price up to $1,499. If you’re a business user or student who mostly surfs the web, answers email, and does other business-type activities, you can save considerable money by purchasing the M1 Air, which will still do everything you need and then some.

On the other hand, if you’re a creative professional or want enough power to run AAA games, then the 14-inch MacBook Pro feels like a better fit. The base model 14-inch MBP with an M1 Pro chip regularly goes on sale for around $1,799. That’s a $300 premium and adds roughly 0.7 pounds in weight, but it gets you a lot of upgrades. The 14-inch MacBook Pro offers an extra Thunderbolt USB-C port, HDMI connectivity, a built-in SDXC card reader, and double the shared memory. The M1 Pro machine also offers two extra CPU cores and four extra GPU cores, which translates into a tangible performance improvement. Plus, the screen is bigger, brighter, and offers ProMotion. Even if you’re doing semi-regular creative work with photos or videos, it seems like that upgrade will be more than worth it in the long run.

Even still, the MacBook Air M2’s appeal is undeniable. It’s slick, fast, and extremely capable. You’ll pay a little extra compared to the older model, but I’d expect the M2 Air to last for years thanks to the headroom this upgraded hardware creates. Just think of it as an investment … And skip the base model.