A hardware company living in a software world 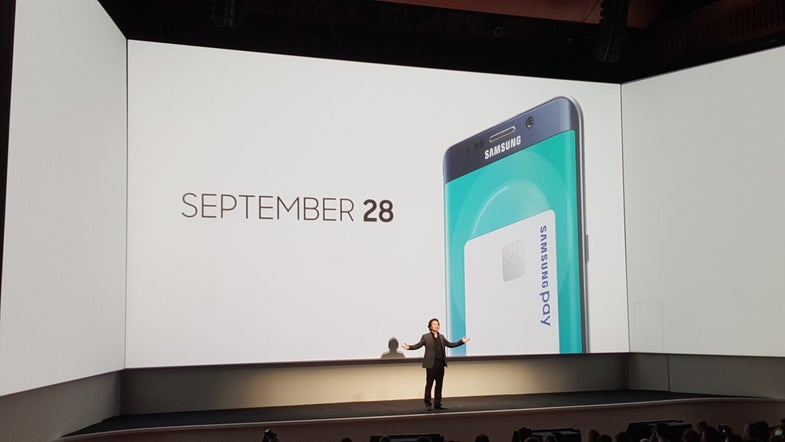 Besides announcing two new phones today, the Galaxy S6 Edge+ and Note 5, Samsung also brought a bunch of important software upgrades to its latest devies. Despite being the best-selling smartphone manufacturer, the South Korean company has traditionally lagged in software design, bucking Android’s interface for their proprietary TouchWiz. These new features, like the integration of mobile payment, live streaming, and improvements to SideSync, show that Samsung is looking to define itself as not only a smartphone manufacturer, but also a player in the software realm.

Although Samsung phones have supported mobile payments for years (since the S2 and first Note in 2011), it seems to be following in Apple’s mobile payment rebranding campaign with Samsung Pay. However, they’re taking a difference approach this time. The most frustrating thing about mobile payment is that it’s tough to gauge which stores use it—adoption isn’t high right now.

But by using Magnetic Secure Transmission (MST), a tiny piece of hardware that sends the same signal as the magnetic strip on a credit card, Samsung is stressing that this card will work virtually anywhere. This technology also allows the S6, S6 Edge, S6 Edge+, and Note 5 to store loyalty cards and gift cards as well. Samsung acquired LoopPay, who originally developed the wireless transmission system, in February. LoopPay bills itself as “the most accepted mobile wallet on the planet,” and Samsung believes that will give it the edge when it comes to making mobile payment viable and popular. Samsung Pay also works with NFC, and will work with American Express, Discover, MasterCard, and Visa.

Samsung Pay is secured by your fingerprint at the time of purchase, like Apple Pay, but it’s also secured on your card company’s side as well. The information that’s wireless sent to the card reader isn’t actually your card information, but a temporary card created by Visa or Mastercard, according to The Verge.

A large part of these upgrades also rest on Live Broadcast, a built-in live streaming function, which looks to battle apps like Periscope and Meerkat. The service streams the S6 Edge+ and Note 5’s video live to YouTube, which has been building out its own streaming capabilities. Live Broadcast can also stream to another Samsung phone, or a group of phones. Twitter’s live streaming app, Periscope, announced that they now have more than 10 million users, a considerable milestone for software that’s nearly four months old. However, baking this capability into Samsung’s operating system puts live streaming into the hands of more than 70 million phone users per quarter. Samsung doesn’t break down the numbers per phone, but if this becomes a universal feature and easier to use than Periscope or Meerkat, it could pose a real threat to existing streaming apps.

SideSync, the software that enables users to send texts and transfer files to a computer, is also getting an overhaul, most notably making it more compatible with every Windows 10 and Mac computer. This is one of the few features that Apple has excelled at ahead of Android—iMessage continuity is a cornerstone of a cohesive Mac experience, and Samsung is looking to bring that to their products. Users will be able to also answer calls on their computers, much like Apple’s Facetime.

Samsung is also adding a slew of other tweaks, like improved image capture and better S-Pen functionality with the Note 5, which will all be available to the complete latest Galaxy line: the S6, S6 Edge and now the S6 Edge+ and Note 5. After seeming to neglect software for years, these upgrades mark Samsung’s move to offer a suite of useful, attractive, and excellent apps that can go head-to-head with Apple and even Android itself, not to mention the massive third-pary app ecosystem.