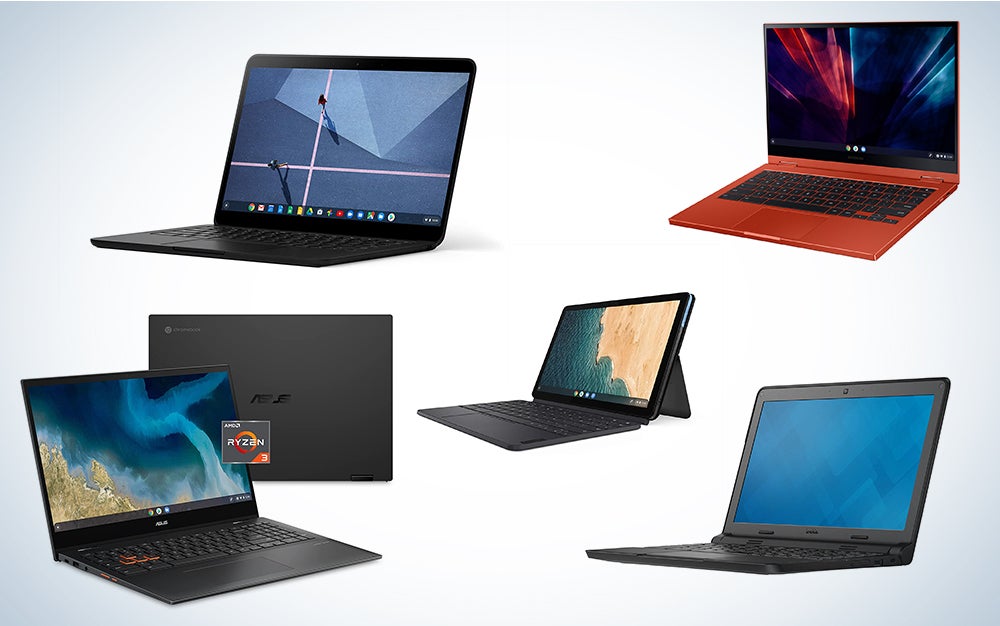 Best Chromebook for kids in 2022

Looking for the best starter laptops? Children can beat their best scores in class and online games with the best Chromebook for kids.

Google: It’s not just a company, it’s a verb. At this point, Google is woven permanently into the fabric of our (virtual) world. And it’s far from just synonymous with search. Google has been developing operating systems for phones and computers for over a decade, as well as hardware that has evolved with the times. Chromebooks, which run on Google Chrome OS, have transformed from glorified browsers into action-packed machines capable of doing a lot, within limitations. A lot of their functionality depends on WiFi connectivity to access the cloud or run connected applications. That means even the best Chromebooks aren’t right for all buyers, especially those who prefer to work primarily offline or access Microsoft or Apple software. But Chromebooks do present a powerful option for younger users because they tend to be easier to use, lightweight, and can be more affordable than some traditional laptops. Now that backpacks are more likely to carry computers than textbooks, here’s our guide on finding the best Chromebooks for kids that need a laptop for school.

How we selected the best Chromebooks for kids

To select the best Chromebooks for kids we compared devices made by top manufacturers—including Samsung, Dell, and Google—paying attention to important specifications that affect how each device functions. We looked at memory and storage capacity to determine how well a device could multitask or how much space it had for apps and files. We looked at screen resolution to compare picture clarity. And we noted features like weight and battery life to judge portability and how dependable it would be for the length of the school day. Along with the specs, we compiled in-house experience and critical consensus to determine the best Chromebooks for students.

What to consider when shopping for the best Chromebook for kids

From multitasking to memory, shape to storage space, here’s what you should keep in mind when shopping for the best Chromebook for kids.

Have you made a style choice?

Many of the best Chromebooks for kids function at all angles. That’s because they feature hinges that allow them to spin 360 degrees, working as a Chromebook laptop, a Chromebook tablet, or a tented device that stands like a folded piece of loose leaf. But this also means they have points of failure if a younger child decides to twist them forcefully and/or repeatedly. Knowing the user is important and can help you narrow your search. Chromebook tablets are more portable, 2-in-1 Chromebooks are more versatile, and Chromebook laptops are more stable.

Is your kid careful?

If a Chromebook is going to survive being stuffed into a backpack or locker, it needs to be durable. And many of the best Chromebooks for kids are exactly that. Despite their lightweight designs, Chromebooks typically feature tough builds that can withstand freezing temperatures, 4-foot falls, and even being taken to the tops of mountains. A MIL-STD-810G grading will deliver this amount of premium protection. A more pressing concern for school use may be leak-proof keyboards and scratch-resistant screens, something many Chromebooks offer.

Do you need to multitask?

Kids always seem so good at multitasking, in part because they grew up with technology that’s designed to perform many functions at once—and with multiple devices competing for their attention. A Chromebook’s ability to multitask is determined largely by its processor, with the number of cores indicating how well it can handle double-duty. Meanwhile, a processor’s speed is often written as millions of instructions per second (MIPS). Intel Core processors are popular in Chromebooks.

How much can you remember?

While Chromebooks rely largely on cloud storage, they do include some amount of storage space built into the hard drive for storing apps and files. This space typically ranges from 16GB to more than 100GB, but 32GB or 64GB is common. Google One storage subscriptions provide space in the cloud and many devices offer a free year of 100GB of space. Meanwhile, a Chromebook’s random access memory (RAM) indicates how well it can perform many functions at once or run complex programs. Chromebooks tend to offer 4GB of RAM, but some devices double that.

You’re excited, but are you charged up?

The best Chromebooks for kids should have batteries that last all day, with life spans ranging from roughly eight hours to almost twice that life. Some Chromebooks feature fast-charging, meaning a few minutes of wall time leads to a few hours of good times.

Will you watch it?

If your kid wants to watch movies (documentaries only, we’re sure) on a Chromebook, it’s important to pay attention to the screen specs. That starts with size, which can range from 9-inch tablets to 16-inch laptops, but it gets even clearer when you look at resolution. The best Chromebook for kids who watch movies or play games will have an HD display that has the potential for 4K, but higher resolution means higher prices.

Is your Chromebook well connected?

Chromebooks depend heavily on WiFi connectivity, so it’s important to make sure your device can provide a fast, stable, and secure connection. Many top brands offer WiFi 6 compatibility, which is said to be potentially faster than cable connections.

Whether your student works hard or plays harder, you can definitely find the best Chromebook for kids in your life. Here are our picks for teacher’s pets.

Best for on the go: Google Pixelbook Go

Why it made the cut: This 2-pound Chromebook is a go-there go-to, with built-in security and antivirus protection to keep your child’s data safe no matter where they work.

With a battery that lasts 12 hours in a device that weighs just 2 pounds and measures 13 millimeters thin, the Google Pixelbook Go is one of the best lightweight touchscreen Chromebooks for students on the go. Starting up in seconds, it’s ready when you are. And it’s ready to do whatever you need. The 13.3-inch Full HD touchscreen (4K on the top model) is brilliant, the 8th Gen Intel Core processor options are fast, and the choice of up to 256GB of storage means you can save plenty of files, even when you can’t connect to the cloud. Plus, if you need an extra boost, 20 minutes of charging provides an extra two hours of use.

Why it made the cut: With reliable wireless capabilities and a responsive, speedy processor, this Chromebook can power through presentations and is great for downtime, too.

Featuring a responsive AMD Ryzen 3 processor and WiFi 6, said to be blazing fast and built to eliminate signal interference, the Asus Chromebook Flip is ready to get to work. The 15.6-inch 1080p touchscreen is bigger than some of the other best Chromebooks for kids on the market and, while that can limit portability it also creates a sturdier workstation. Plus, a 360-degree hinge lets the Chromebook take on any shape, from Chromebook tablet to tent. The 64GB hard drive will let you save work offline, though, like all Chromebooks, this is really built for the cloud. When work is done, the Asus Chromebook Flip turns into a great playmate, with AMD Radeon Graphics and speakers by Harman/Kardon to display games and movies in all their glory.

Why it made the cut: This Samsung is a stylish and versatile Chromebook that can last keep up with your gaming sessions.

When purchased in the bright Fiesta Red color, this Samsung Chromebook simply looks like gear for a gamer. It’s got the speed to back it up, offering the high-bandwidth WiFi 6 and a quick Intel Celeron Processor. The 13.3-inch Full HD screen has a maximum resolution of 1920 x 1080 and the Chromebook can also be turned all the way around––from Chromebook laptop to tablet. The Smart Amp audio boasts a surround-sound-esque experience and 13 hours of battery life means you can play all day on this Samsung Chromebook––but only after you finish your homework.

Why it made the cut: A detachable keyboard turns this affordable Chromebook laptop into a tablet, making it easily adaptable to any situation.

If your kid mostly plans to use a Chromebook to browse the internet (not during class, of course), but still wants a device that can be put to work when called on, a 2-in-1 Chromebook provides great flexibility. And the Lenovo Chromebook Duet, which sells for close to $200, is one of the best touchscreen Chromebooks available. Wrapped in an attractive aluminum alloy, it features a 10.1-inch 1920×1200 touchscreen, a 2 GHz MediaTek Helio P60T Processor, and the same 64GB of storage you get in many of the best Chromebooks for kids. A magnetic keyboard attaches when you want to work and the USI stylus helps you get creative. The 10 hours of battery life provides ample time to accomplish it all.

Why it made the cut: At about one bill, this is the best Chromebook for kids that won’t break the bank or break your kid’s heart if it gets lost or damaged.

Available for about $100, this minimal-frills device is one of the best inexpensive laptops on the market. It features a capable 2.16 GHz Intel Celeron N2840 processor and solid Intel HD integrated graphics. The storage capacity is limited to just 16GB, but as with all of the best budget Chromebooks, it’s designed for cloud connectivity anyway. It’s not a 2-in-1 or intended for demanding tasks, but it’s perfect for your kids who need to do some online instruction and then have some fun.

Chromebooks are good for school kids. While they don’t feature the same suite of software as Microsoft and Apple devices and their storage space is limited, they still enable school kids to get work done, saved, and turned in via Google apps. Limited software also makes them easier to configure and use than other devices. Plus, many of the best Chromebooks for kids boast battery lives that’ll last the entire school day––and then some.

Q: What is the best brand for Chromebook?

Because Chromebooks run on the Google Chrome OS, you may think Google is the absolute best brand for Chromebooks. Google certainly makes excellent devices, but so too do brands like Samsung and Lenovo. Acer launched the first Chromebook in 2011, and they still make reputable devices.

Q: What can kids use a Chromebook for?

Kids can use a Chromebook for many of the same things they want to do on a traditional laptop. It’s true that the lack of software puts a limit on some projects, especially if a kid wants to do a lot of video editing, graphic design, or depends on Microsoft 365. Still, Google’s apps can offer many similar functions, and Chromebooks feature beautiful displays for gaming and watching movies, as well as fast and reliable WiFi connections for internet browsing.

Final thoughts on buying the best Chromebook for kids

Chromebooks aren’t for all kids. They rely heavily on internet connectivity to store files on the cloud and run browser-based programs. They’re not for photo/video editors or eSports pros in training. But the tradeoff is a more streamlined operation that tends to lead to devices that are cheaper than traditional laptops. So even if Chromebooks aren’t best for all kids, you can certainly find the best Chromebook for kids in your life. From laptop Chromebooks to tablet Chromebooks to 2-in-1 Chromebooks, there is a type for all types, even for kids who rarely need to type.