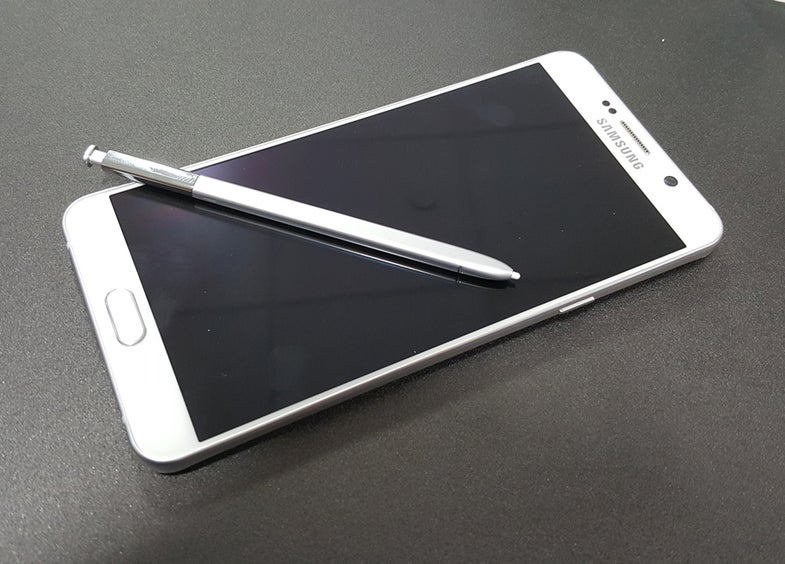 Earlier this month, Samsung unveiled the Galaxy Note 5 at a special media event in New York City. During the event, executives touted Samsung’s commitment to styluses made for touchscreens, emphasizing that — at least according to Samsung’s device sales — there was a clear demand for them.

If only they’d known that the Galaxy Note 5 stylus would ship with a seemingly major design flaw: when inserted backwards (upside down) into the phone, the Note 5’s stylus gets stuck and can actually break the very mechanism that allows it to be detected by the smartphone in the first place. The defect was first reported by Android Police in the video show below.

The new Samsung S Pen—the name of the stylus that ships with every Galaxy Note device—is the most advanced of its type, according to the company. The Note 5 is supposed to recognize when the S Pen is removed from the smartphone’s body, and the S Pen is ejected from the body using a spring-loaded mechanism. This mechanism is activated when you push the pen in.

The problem is that if a user inserts the pen the wrong way, with the button going into the smartphone body, the pen gets stuck and is extremely difficult (or even impossible!) to remove. Even if you do get the S Pen back out, as Android Police was able to do, the sensor that allows the Note 5 to detect and register touches from the stylus may be broken, rendering it useless (the phone’s touchscreen still works with finger inputs, however).

To add to the issue, putting the S Pen in the wrong way is actually pretty easy to do. There is little or no resistance from the smartphone when you slide the pen in backwards. Samsung’s response to the problem has also been somewhat frustrating, with the company putting the onus entirely on users not to accidentally insert the pen in the incorrect direction. “We highly recommend our Galaxy Note 5 users follow the instructions in the user guide to ensure they do not experience such an unexpected scenario caused by reinserting the S pen in the other way around,” Samsung said a statement released to The Next Web and other media outlets.

Only time will tell whether or not this flaw is a big enough issue for Samsung to take action, and if so, what that would look like. Could a firmware update fix the broken sensor detection (unlikely)? For now, the only thing Galaxy Note 5 users can do is be extra careful when inserting their S Pen into the device. We’ll continue to update as the story develops.