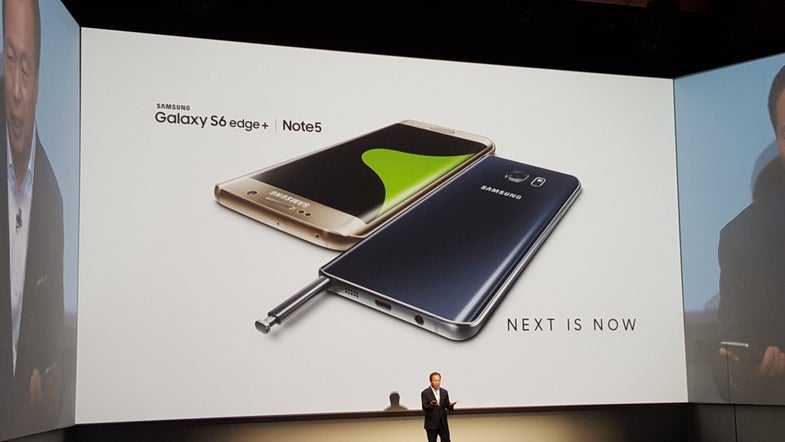 Samsung’s flagship Galaxy smartphones are getting even bigger. At a special media event earlier today, Samsung unveiled two new big screen smartphones: the Galaxy Note 5 and the Galaxy S6 Edge+. The new Galaxy S6 Edge+ has a 5.7-inch AMOLED display and two curved edges, and stands as a larger companion to the popular Galaxy S6 Edge. The Note 5, an update to last year’s Note 4, actually has the same screen size, same 4GB of RAM, and the same octa-core Exynos 7420 processor. Both phones also feature fast wireless charging, and the Samsung claims that each of the phone’s 3,000 mAh batteries can be charged in 2 hours wirelessly.

There’s one main difference between the two: The S6+ has a dual-edge screen, and the Note 5 has the S-pen. During Samsung’s keynote at Lincoln Theatre in New York City, Samsung executives sung praises of the S-pen, saying that it was just as important to the Note 5 as a mouse is to a computer. (Nobody mentioned trackpads during the presentation.)

However, in almost every other regard the specs are the same. Take a look at the spec sheet:

In other hardware news, Samsung has made a physical snap-on QWERTY keyboard that snaps onto the bottoms of each phone for easier typing and “firing off emails.” The phone recognizes when the hardware keyboard is clipped on over part of the touchscreen, and makes the on-screen keyboard smaller to be fully covered by the snap-on. Instead of using Bluetooth, the touch display senses tactile inputs from the keyboard. When the keyboard isn’t in use, it clips to the reverse side of the phone.

Samsung also brought a slew of software upgrades to each phone: improved SideSync (which allows texting and file sharing on PCs, and now Macs), a more robust screen capture software, and better note taking capabilities with the S-pen (much like the Windows Surface’s pen, which activates a quick notepad with a physical button).

To cap it all off, the halls of Lincoln Center blasted techno to herald the coming of a new Samsung smartwatch, which will be unveiled next month in Berlin’s IFA, an international technology conference. The Galaxy S6 Edge+ and Note 5 will be available for preorder starting August 13 at 3 p.m., and in stores August 21 in the United States and Canada.