The best e-reader award is actually a tie

Mary Poppins wishes she could carry so many books in her pockets. 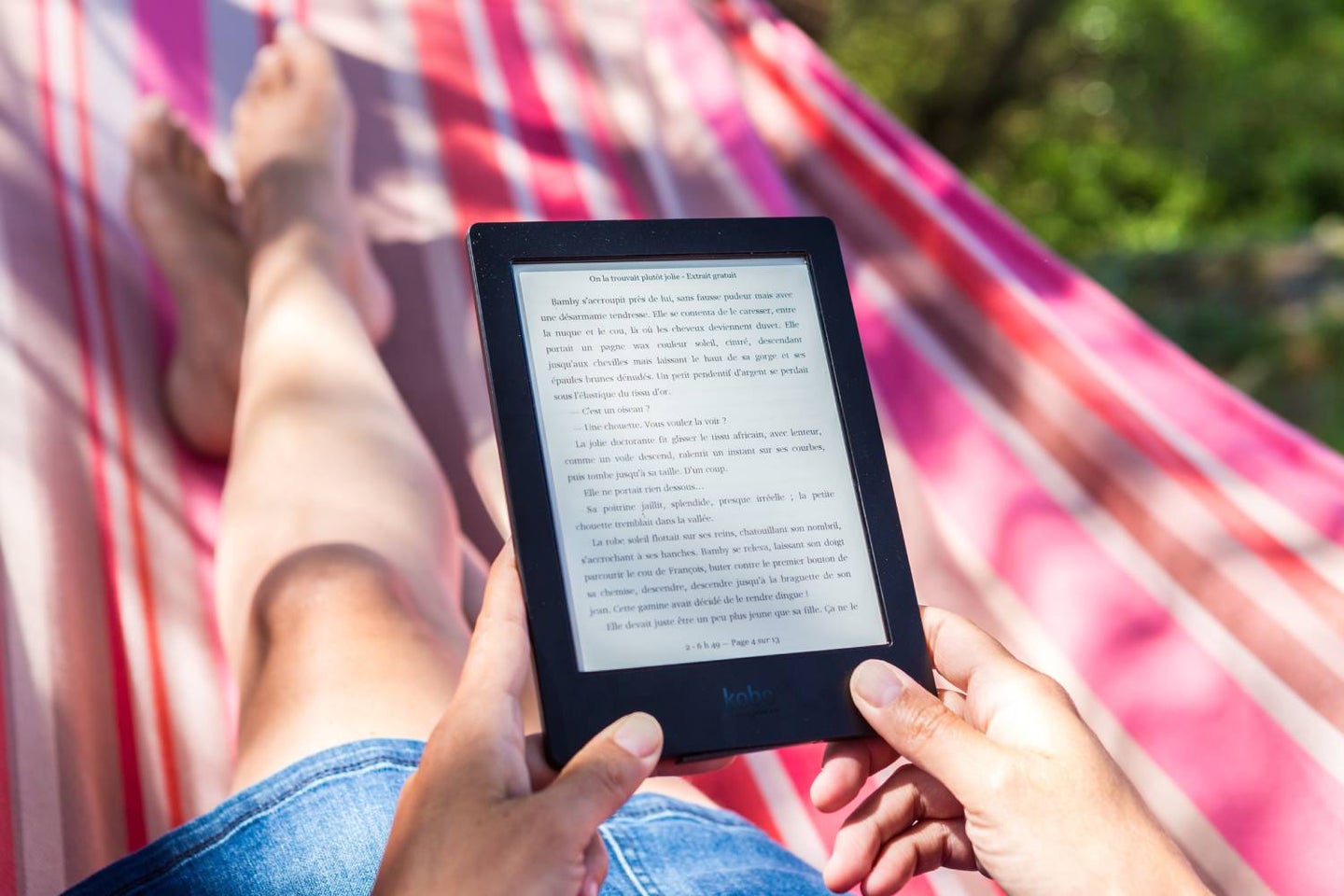 Trust us—if that were "War and Peace," that hammock wouldn't be half as comfortable. Perfecto Capucine/Unsplash
SHARE

This story has been updated. It was originally published on April 25, 2020.

E-book readers are one of the clearest signs the future is now—having an entire library in your pocket powered by a battery that almost never runs out is exactly what my seven-year-old self was dreaming of (sorry, iPhone).

If you love reading but are still new to e-readers, you’re in for a serious treat. It’s never been easier to carry around what would be a large hardcover to read on your commute or your vacation. And if you’re stuck with an old e-book reader and want to upgrade, now is a good time to do it. Unlike smartphones, the e-book landscape shifts glacially, but there are a few great options that weren’t available a few years ago.

E-book readers aren’t really standalone devices—they’re the hardware expression of a whole software ecosystem. This means that depending on where you buy your e-books (Amazon, Google Play, Barnes & Noble, the Kobo store, etc.), you will only be able to read your book on devices with a specific operating system.

Buy Little Women on iTunes and you’ll only be able to open it on the iBooks app on your Apple devices. Porting the same file to your Kindle (Amazon), or even reading it on the Kindle app for iPadOS or iOS, isn’t a simple process and requires breaking the digital rights management (DRM) seal that protects the file.

If you’ve already amassed a sizable e-book library and want to update your e-reader, the most important feature to look for is compatibility. If you have a Kindle, stick with Kindles, and if you have a Kobo, stick with Kobos. Switching operating systems involves changing your entire ecosystem; if you do so, be prepared to buy your entire library all over again.

[Related: Keep your brain in shape by reading more books]

If you’re buying an e-reader for the first time, you’ll definitely have more freedom. But still, choosing which store you want to go with is a major decision because you’ll have to stick with it at least for the foreseeable future.

Since the word “Kindle” is now synonymous with “e-reader,” it might seem Amazon has already won the e-book war, but the online retailer is not the only option. There are two other major choices with dedicated hardware available: the Kobo Store, and Barnes & Noble’s Nook Store.

There’s not a lot of difference between these alternatives. If there’s an independent author you love and they only publish on one store, that might be a reason to choose one over the other, but beyond that, all stores largely stock the same array of titles and let indie authors self-publish.

Barnes & Noble’s Nook Store raises a few red flags, though. After pulling out of the UK in 2016 (and leaving existing customers in a bit of a bind), they’re now only available in the US. Plus, they update their hardware less frequently and users have flagged their plastic build as inferior to that of Kindles and Kobos.

If you’ve already invested in Nook and have no problems accessing their store, sticking with it is not a bad idea, but given these circumstances, it’s definitely hard to recommend buying one as your first e-reader.

The Kindle is by far the most popular line of e-readers. If you’re getting an e-reader for the first time, going for a Kindle is a safe bet. Amazon is clearly committed to its roots as a bookseller and is highly likely to stick around and keep providing support for your device.

If you dislike Amazon’s business model, question their ethics, or simply don’t want to give even more money to a billionaire like Jeff Bezos, then a Kobo is an easy choice. Their hardware is every bit as good as Amazon’s, and their wide range of available titles will definitely satisfy all your reading needs.

For most people, the Kindle Paperwhite is the e-reader to buy. Sure, there are cheaper devices out there, but this one hits the middle ground between price and performance perfectly. And with Amazon’s huge e-book store, you’ll never be short of something to read.

It’s hard not to love it. It features a flush 6.8-inch, 300ppi E Ink touchscreen display that looks great, and at 7.2 ounces—about the weight of three Snickers bars—it’s easy to carry around. The device is IPX8 waterproof rated, so a few splashes by the pool, or even a quick dunk, won’t harm it. The LED front light makes it easy to read anywhere, whether in direct sunlight or curled up next to a flickering fire. If you have an Audible account, you can connect a pair of Bluetooth headphones and listen to audiobooks.

If you’re already tied into Kobo’s ecosystem, the Clara HD is a great upgrade to older models like the Glo or Touch 2.0, and if you’re looking for a new e-reader, it’s definitely the best non-Amazon option—though it’s hard to recommend it over the Paperwhite for any other reason.

It’s got a similar 6-inch, 300ppi front-lit E Ink touchscreen display, which is super easy to read on. What sets the Clara HD apart (other than the fact that it’s not tied to Amazon) is that it’s slightly smaller and lighter, but these differences are minimal and don’t have a huge effect on user experience. One nice touch is that the screen tints more toward yellow as the day goes on, but unlike its Kindle counterpart, it’s not waterproof and doesn’t have Bluetooth capabilities.

What else is out there?

The Paperwhite and Clara HD are the best products in their respective lineups, but they aren’t the only ones. If neither of our suggestions work for you, you’re not out of luck.

Amazon also sells the Kindle—an entry-level model—and the Kindle Oasis, but both miss the mark for totally different reasons.

The Kindle is too close in price to the Paperwhite to be worth the tradeoffs. It’s not waterproof and only has a 167ppi screen, so text will look noticeably fuzzier. The screen feels less premium, as it’s noticeably recessed—the bezel casts a slight shadow and it feels like one of those old-school ATM touch screens you had to thump to get it to simply register a touch. If you’re not sure whether you’ll use a Kindle or not, it can be a good taster, but it’s an inferior device.

The Kindle Oasis, on the other hand, starts at $250 and features a cool asymmetric design, aluminum body, an automatically adjusting 7-inch screen, and physical page buttons. It’s an absolute delight to use, but it’s hard to justify the $120 price increase over the Paperwhite, especially since I’ve found its battery life to be significantly worse.

[Related: Your e-reader can display more than just books]

Keep in mind that Amazon also carries its line of Fire devices, and even though they can be used to read books, they’re strictly tablets, not e-readers. You can always try one of these, but they’re an entirely different product.

The Kobo Libra H2O, meanwhile, is worth a look. Like the Kindle Oasis, it has a 7-inch screen and an asymmetric design with physical buttons to turn your pages. It’s also IPX8 waterproof and, at just a small cost above the Clara HD, the premium features don’t come with the Oasis’ ludicrous price tag.

With 7.8-inch and 8-inch screens, respectively, the Kobo Aura One and Kobo Forma just won’t slip into a jacket pocket or small bag, so they’re almost too big to carry easily. Other than the bigger screen (which ends up being more of a fuss than a plus) there’s no way to justify their prices over the Libra H2O.

The problem with Barnes & Noble’s Nooks isn’t the devices, it’s the ecosystem itself. Considering its fluctuation in size, if one of the three big e-book reader makers fall, odds are it’ll be Barnes & Noble. With that said, if you’re looking for a Nook, you have an option.

The Nook GlowLight 3 is big, plasticky and, despite having a similar screen and the added page-turn buttons, feels like a cheaper knock-off of the Paperwhite. It’s a decent e-reader, but the GlowLight3 is similarly priced to the Clara HD and impossible to recommend over it.