Will I Ever Get A Color E-Reader? 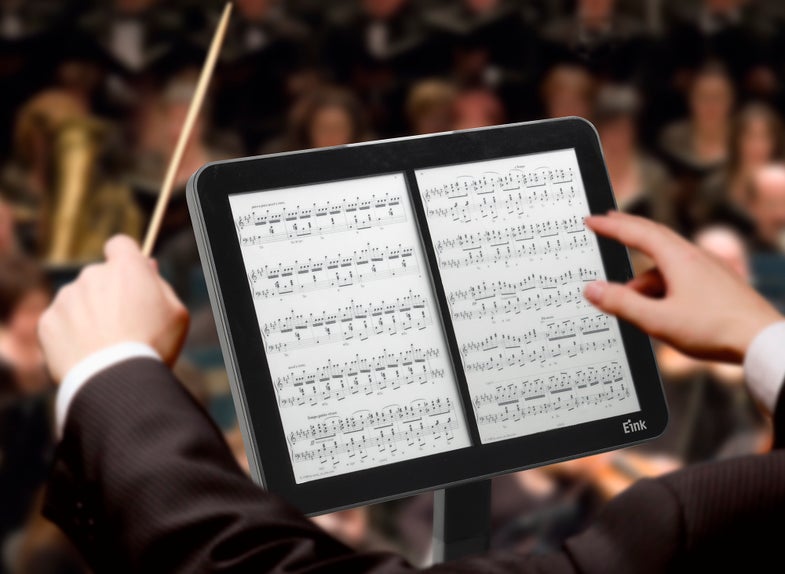 E-readers inspire the kind of polarization usually reserved for religion and taxes. Their detractors call them soulless, shoddy excuses for real paper. But to their fans, their months of battery life, huge libraries, and lightweight frames are just short of magic. Of course, the core technology of the Kindles, Kobos, and Nooks that drive these passions is their textured, paper-like displays. All three major e-reader companies buy their displays from one firm: the eponymous E Ink.

Unlike more common LCDs and LEDs that shine colored light at the viewer to create an image, e-paper screens reflect and absorb the ambient light in a room—just like a page in a book. Once e-paper displays an image, that image remains on the screen until an outside source changes it again—even without power or instructions from a computer.

This happens because e-paper displays rely on moving matter around instead of coloring bright lights, according to Giovanni Mancini, a director at E Ink. In a basic e-reader display, millions of capsules as narrow as human hairs are laid over an electric array. Each capsule is filled with black and white particles. All the black particles share a charge, positive or negative, and the white particles have the opposite charge. The array generates hundreds of tiny electric fields per square inch. Where the field is positive, negatively charged particles sink to the bottom—toward the array—and positively charged particles rise to the surface, where you can see them.

When the array turns on and off very quickly, the red ink wins the race to the surface and color pops. Leave the array on for a bit longer and black particles catch up and overwhelm the red, blotting it out.

Flip a page and the array switches on for a fraction of a second, rearranging the particles. Then they array quickly turns off, freezing the particles in place and locking a new image onto the screen. Each field on the array becomes a single pixel of black or white, all of which together form the page of your book. Mancini says the displays form grey tones by turning the fields on and off too quickly for the particles to finish rising or sinking, leading to a mixture of black and white.

Because e-paper relies on positive and negative charges to produce each pixel, introducing more than two colors (black and white, blue and white, etc) poses an engineering challenge. Mancini says E Ink is beginning to solve the problem. Color e-paper has hit the market—not in e-readers yet, but as dynamic signs for stores and restaurants that prefer e-paper’s muted tones to bright LCDs. (Imagine the chalkboard outside your local coffee shop rearranging itself or displaying animated figures.)

Mancini says three-color-ink displays—the simplest and most common—work by exploiting differences in the speeds that molecules move through a solution. If the red particles move faster than black ones, they can share a charge. When the array turns on and off very quickly, the red ink wins the race to the surface and color pops. Leave the array on for a bit longer and black particles catch up and overwhelm the red, blotting it out. Already, Mancini says, more colors can be introduced by refining the technique.

All that pushing and shoving of particles explains why you shouldn’t expect an e-paper television or tablet anytime soon. LCD and LED screens can change their image hundreds of times a second. Ramping up refresh rates on e-paper leads to ghostly after-images. Those particles can’t keep up with the demands of video–or even an android desktop. Instead, look for e-paper showing in road signs, billboards, and wearable electronics.

Correction (10/14/2014, 4:05pm ET): The original story referred to Giovanni Mancini as Giovanni Mancinni. It has been corrected. We regret the error.