New rectangles on which to read and watch and play things. 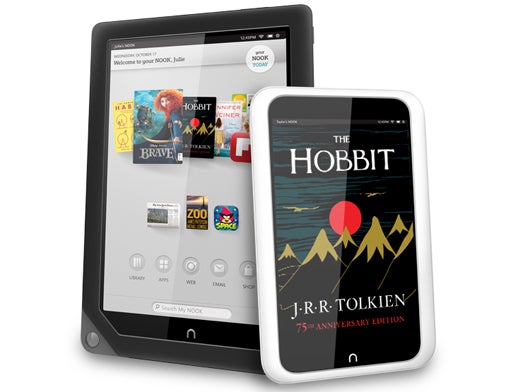 Lest we forget, Barnes & Noble actually beat Amazon to the cheap Android tablet market with the Nook Color, but now the bookseller is playing a bit of catch-up, since Amazon has sold about a billion Kindles Fire. Today B&N announced the Nook HD seven-inch and Nook HD+ nine-inch Android tablets. And, well, if you think they must be a lot like the Kindle Fire, you’re dead right, though that’s not necessarily bad news.

The new tablets have denser screens than the new Fire line, which is especially important in a post-Retina-display world where we intrinsically expect text on book and magazine pages to be sharp enough to open the most difficult of plastic bubble-packaging. The HD boasts an impressive 243 pixels per inch and can handle 720p video, and the HD+ runs at 256ppi at 1080p. The iPad 3, for comparison’s sake, has 264ppi, and Kindle Fire HD the lags behind the group with 216ppi (216 is still pretty good, we should say). Current-gen Texas Instruments OMAP processors (clocking at 1.5GHz and 1.3GHz) drive the new high-res screens. And both devices, despite their specs, are comfortably light at 18.2 and 11.1 ounces, respectively and a soft-touch back and wrap-around bezel help them feel nice in-hand.

Of course to compete with Amazon, B&N had to conjure for itself a video-on-demand service, which they did yesterday. They’re not releasing any specific numbers about their catalog size (we asked in as many sneaky ways as we could think of), but so-called Nook Video already has inked partnerships with HBO, Sony Pictures, STARZ, Disney, Viacom, and Warner Bros. Movies and TV shows are available to buy or rent.

Then there are the requisite software tweaks to improve the NookHD’s usability, all of which appear—in the short time we spent with the devices, at least—to actually be useful. The device can store up to six libraries for individual users; this way dad doesn’t have to sift through junior’s Archie comics to get to his Sports Illustrated. From the lock screen, drag the unlock icon onto whichever library you wish to enter. As for the homescreen itself: there’s nothing remarkable here, just close mirror to the Kindle Fire, with recently-opened items up top and pinned items below. B&N, though, has added a nice scrapbooking app, which allows users to pin magazine and catalog pages into files they can refer to later on, and an improved recommendation engine pulls up content across all media—books, magazines, comics, catalogs, movies. All the expected stuff is there, too: a curated app store, syncing with Nook apps across devices, email, and a Web browser.