It's an iPad, except it's smaller than iPads usually are. 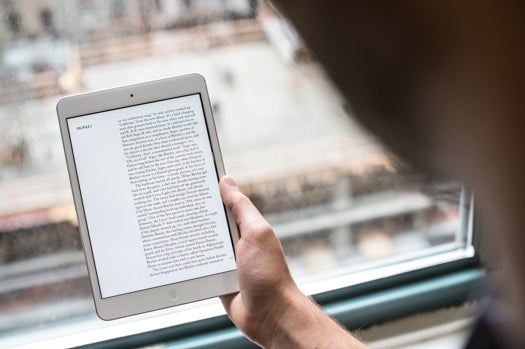 Whether you’ll like the iPad Mini has a lot more to do with your physical health than you’d think it would. How healthy are your eyes? How big are your hands? How strong are your forearms? How acute are your ears?

It’s an iPad 2–the one right before the Retina Display iPad–but shrunk, from a 9.7-inch diagonal screen to a 7.85-inch diagonal screen. Same screen, same processor, same storage options. There honestly is not much else that’s different. It has a different charging port, I guess? Oh and the magnetic smart cover has padding on the magnets so it doesn’t scratch up the side of the Mini.

But, you know. It’s an iPad but smaller. Next section!

What’s good about it?

It works just like an iPad, and iPads are great! Simple to use, responsive, a bazillion apps (many of which are designed just for the iPad, unlike Android’s tablet offerings). Apps are frequently incredible: futuristic magazines, great music and video apps, newspapers and books and games and utilities. Games in which you physically tilt the iPad around, like in racing games, are much easier on the Mini than the big iPad. There’s nothing a big iPad can do that the Mini can’t. The hardware is luxurious and tiny; only 7.2mm thin, only 0.68 pounds. It feels immediately more expensive and classy than any of the competing little tablets, even though I very much like the leathery Nexus 7. But the super-thin, minimalist glass and aluminum of the iPad Mini is pretty much tops. 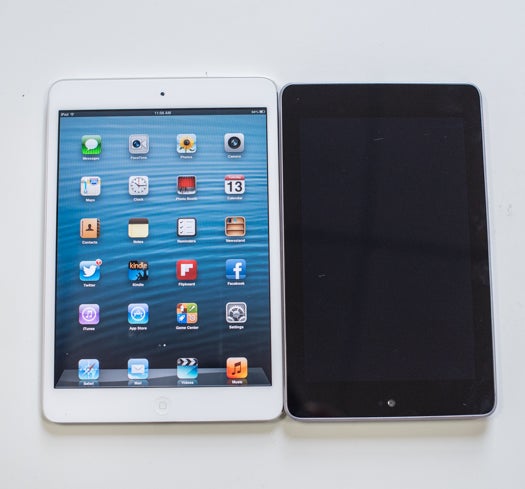 Reading, mostly, is much better on the Mini. The Kindle app feels, suddenly, non-silly. It’s not crazy to use the Mini to read on the subway; the size and weight make it feel much more like an ebook reader, and it slips into a jacket pocket or bag without adding much weight. Compared to other 7-inch tablets, I think the screen size and ratio–it’s a 4:3 screen, squarer (and, as we found out, classier) than an Android tablet’s 16:9–is much easier to use for everything but video. Web browsing is so much more comfortable, and you can fit more in an app, especially with multi-pane apps like a chat app or a Twitter app.

Other folks had trouble with the keyboard. I did not; it’s not like the full-sized iPad keyboard is all that good, and my two-fingers-and-a-thumb technique carried over just fine. And, actually, when holding it in portrait (upright) mode, you can thumb-type on it just like an iPhone. It’s not great, but I didn’t have any particular issues with it.

What’s bad about it?

Well. I have strong eyes and a weak body, so I like the Mini a lot. But it has the same resolution as the iPad 2, which means it’s not nearly as sharp as the bigger iPads, and, actually, not as sharp as the otherwise-inferior Kindle Fire and Nexus 7. (It clocks in at 163 pixels per inch, compared to 216 pixels per inch for the other tablets.) And I definitely found it to be more reflective than other tablets, let alone electrophoretic devices like the Kindle and Nook. The Mini fears the sun! And reading in general is less pleasant than on a Kindle or Nook, just because there’s an LED light shining at your unblinking, enraptured eyes for hours at a time.

But the bigger problem is that iPad apps run natively but scale down for the smaller screen. I like small text, so I had no problem reading, say, the New Yorker on the Mini–but the text is much smaller, and there’s no way to increase the size. Magazines, which are one of the best things to do with an iPad, are definitely a little bit tougher on the Mini. It’s not just text, either–gorgeous photography in National Geographic or, uh, Popular Science just doesn’t wow in the same way it does on a fancy high-resolution full-sized iPad. Video looks kind of silly. It’s better than on a phone, I guess, but there’s an awful lot of letterboxing due to the screen’s length-width ratio. 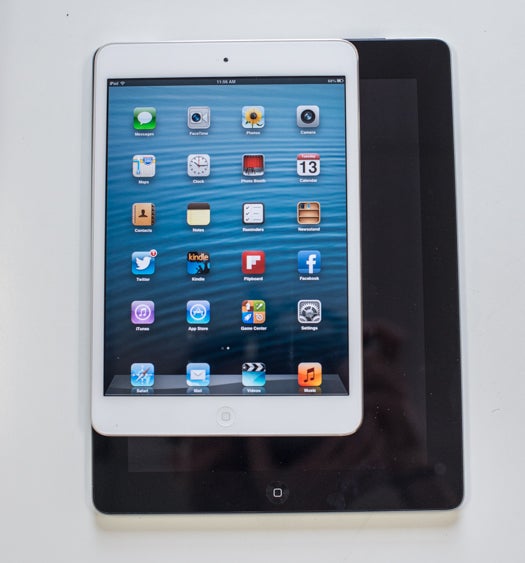 One of these iPads is the Mini. Can you guess which one???

It’s also definitely last-gen internals; there are slight hiccups as you whiz around iOS. Opening apps or swiping between screens sometimes caused a stutter, unlike the slick clay marl smoothness of the iPad 3 or 4. I don’t care about this as such, but it’s a bummer when compared with the full-sized iPad. For what it’s worth, I found the Mini much speedier than the Kindle Fire and moderately faster than the Nexus 7.

It starts at $330, with 16GB of storage and no cellular (4G LTE is available). If you’re going to buy this, that’s the one to get–if you opt for cellular or more storage, you’ll very quickly get into the price territory of the full-sized iPad, which is, you know, better.

I’d definitely recommend the Mini over the competing Android tablets, but that doesn’t necessarily mean I recommend it. It’s still very expensive and very frivolous. Nobody needs a tablet, is the thing, so if you’re going to get one, I’d say go all out and get the best one, which in this case is only half again as much money. I guess it’d make a nice gift, if you’re a very specific rich person who likes giving $330 gifts but not $500 gifts.

As a standalone gadget, I think it’s great. It does all kinds of stuff and it does them all pretty well, with just a few problems for those with weak eyes. It’s weird to get this precise with cost, but I think at $250, I’d be saying something different–I’d say, this is a crazy deal, just like what I said when Amazon showed their $80 Kindle. “It’s basically as good and so cheap!” But at $330, the iPad Mini is still pretty expensive. It’s not an impulse item, it’s not a stocking stuffer. No sane person would have both a Mini and a Big Boy iPad, so if you’re getting an iPad, or, really, if you’re shopping for a tablet at all, go for the Big Boy iPad.