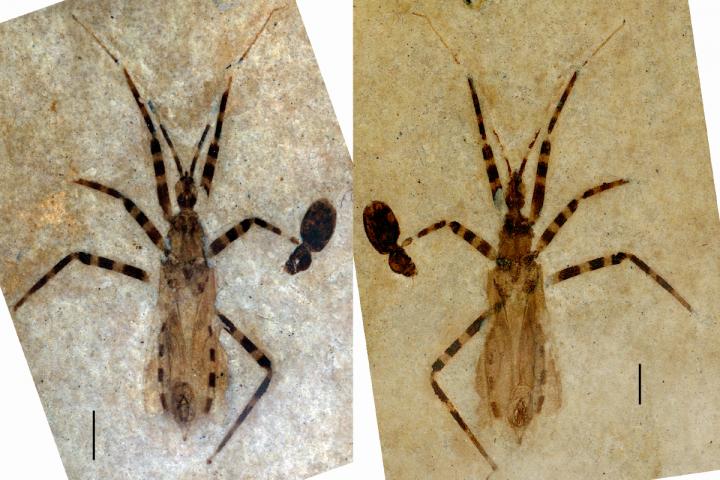 A 50-million-year-old assassin bug offers a rare peek at reproductive structures that aren’t usually visible in fossilized insects. The “extraordinarily well-preserved” male genitalia of the newly discovered species, named Aphelicophontes danjuddi, show similarities to those of present-day bugs, scientists reported on January 19 in the journal Papers in Palaeontology. The discovery of the tiny insect, whose body measures roughly half an inch in length, also indicates that its branch of the assassin bug family is 25 million years older than previously thought.

“Insect genitalia are only extremely rarely preserved in the fossil record,” Daniel Swanson, a graduate student in entomology at the University of Illinois Urbana-Champaign and a coauthor of the new findings, said in an email. “Structures of the internal genitalia are very small, and the forces of pressure and time that are required to produce a fossil are not kind to these delicate structures.”

Furthermore, he said, the genitalia are usually tucked up inside the body, making them difficult to find in fossils. Luckily, however, one of the fossils that Swanson and his colleagues examined happened to be split through the middle of the body, revealing these internal structures. It was discovered in the Green River Formation in northwestern Colorado, which dates to between 53.5 and 48.5 million years old. The insect likely fell into one of the ancient lakes that covered this region and sank into the soft, mucky bottom. Over time, layers of sediment and debris piled on top of the carcass and hardened, preserving it with minimal damage, Swanson said.

Today, assassin bugs are found in temperate and tropical regions around the globe. There are around 7,000 species of these insects known to be alive today, and another 50 species identified from fossils. “Most of them are predators of other arthropods, earning their common name by jabbing their long curved ‘beak’ into their prey and pumping in digestive juices to kill it, then sucking out the resulting ‘soup,’” Swanson said. One exception is the group known as kissing bugs, which feed on blood and transmit the parasite that causes Chagas disease in people.

To determine whether the split fossil and another fossilized bug from the same area represented a new species, Swanson and his team meticulously compared the anatomical features of their specimens with those of other present-day and extinct assassin bugs. The researchers found that their mystery bug didn’t quite match any known species. The team named it Aphelicophontes danjuddi after the fossil collector Dan Judd, who had donated one of the two halves of the divided fossil to the researchers.

Two of A. danjuddi’s distinctive features were the absence of body spines and the bold banded pattern on its legs. This pattern is reminiscent of ones found in several living assassin bugs, although what advantage the stripes might have provided isn’t clear, Swanson said.

Particularly intriguing, however, were the insect’s nether regions. Swanson and his colleagues were able to discern several structures that were similar to those of present-day assassin bugs. These included the pygophore, or genital capsule, a hardened cup that protects the internal genitalia and is lowered during mating to allow the inflated phallus to slide out. Within this capsule the scientists could make out the stirrup-shaped basal plate, which acts as a scaffold for softer tissues such as the inflated phallus, Swanson said. Also visible were parts of the phallotheca, a pouch that holds the uninflated, retracted phallus.

Although they’re only rarely seen in fossils, structures like these are useful for understanding how insects have evolved over time. Small changes to the genitalia can prevent different populations of insects from being able to mate with each other, eventually causing them to split into new species.

“Insect genitalia are important because differences in their structure are one of the primary characters used to demonstrate that species are different from one another,” Swanson said. “The similarity of the fossil species to living assassin bugs (including the very similar internal genitalia) indicate how successful this body plan and way of life has been for this group of organisms.”