These Two Insects Have Been At It For 165 Million Years

A great find for science! What does this stony insect sex bring to the table for science? Well, it seems that froghoppers’ genitalia and mating habits probably haven’t changed much since the Middle Jurassic, 165 million years ago.

Since not a lot of ancient insects were preserved in the act, scientists don’t have a whole lot of evidence to go on for determining how mating behaviors might have changed over the millennia. It’s not entirely clear from the fossil whether these ancient froghoppers mated belly-to-belly, as they appear, or if they used the side-to-side position favored by modern froghoppers and this face-to-face embrace was just a result of the fossilization process. 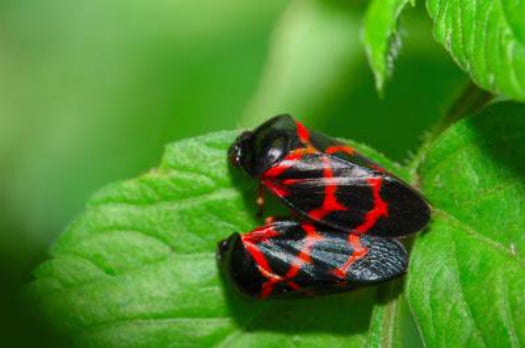 Fun facts: Young froghoppers are called spittlebugs, because they make what seems to be a huge wad of spit. As the paper in PLOS ONE puts it: “The nymphs of froghoppers are called spittlebugs because they cover themselves with foaming spittle, composed of tiny air bubbles trapped in secretions from their Malpighian tubules, which provides protection from predation, parasitism and desiccation.” Yum.

The study, delightfully titled “Forever Love: The Hitherto Earliest Record of Copulating Insects from the Middle Jurassic of China,” appears in PLOS ONE this week.