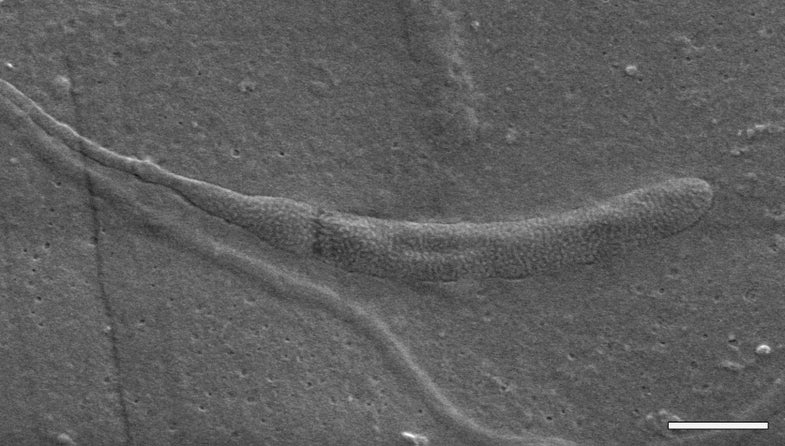 We all know about how mosquitos trapped in amber:

Can lead to dinosaur biker gangs:

(Or, at the very least, awesome memes) But what about worm sperm trapped in a cocoon? It probably won’t lead to insane theme parks with a death wish, but it could change our understanding of ancient microbes.

In a paper published today in Biology Letters, Benjamin Bomfleur and his colleagues announced the discovery of 50 million year old sperm cells found in a cocoon in Antarctica. This is the oldest animal sperm ever discovered, but what’s really exciting is where it was found: in a tiny cocoon in Antarctica.

These cocoons aren’t like cocoons used by butterflies to make their lovely transformation from lowly caterpillar to gorgeous winged creature. Instead these cocoons are integral to the mating process of many different species of worm and leech. After mating, the worms secrete a sticky gel like cocoon that contains the egg and sperm. Over time, it hardens, trapping the cells inside.

In that regard, the cocoons act just like amber, trapping tiny bugs inside. But unlike amber, which captures actual bugs, these cocoons capture tiny microorganisms, which almost never get preserved in the fossil record. Unlike dinosaur bones, organisms like bacteria, protozoa, and even worms, tend not to preserve well. Their soft bodies usually decay quickly — too quickly for them to make any kind of impression on the dirt and sediments surrounding them. That’s what makes this research so exciting. By taking a closer look at the cocoons, researchers can get a better idea of what kinds of microorganisms were around in the past.

Bomfleur told Popular Science in an e-mail that the cocoons “literally occur from pole to pole, with some having been described from the Svalbard Archipelago in the Arctic and others having been described from Antarctica. Furthermore, they occur in sedimentary deposits of all ages younger than Triassic.” The fact that the cocoons are so common make them perfect for learning more about the tiny creatures that came before, and could allow paleontologists to eventually develop a worldwide picture of what kinds of microbes were present in different areas over time.

Previous research into the topic found a nematode and a protozoa trapped in cocoons, and the future is wide open. The cocoons could contain bacteria, fungi, protists, amoebas, or micro-worms. “Personally, I would hope for a tardigrade!” Bomfleur said.