The Trouble With Nobel Prizes

They're not magic medals of blamelessness 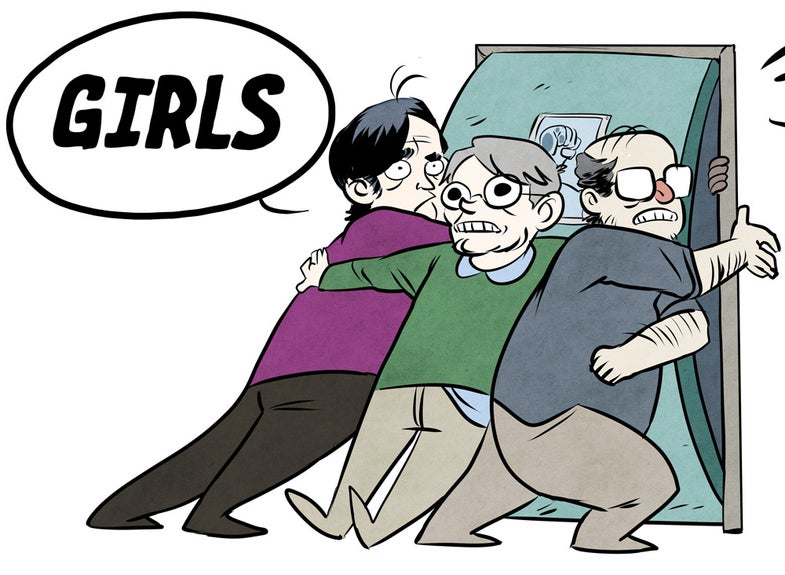 Update: Somehow missed this, but excellent dude Phil Plait has a fantastic run down of the events leading up to now. Give it a read.

Update 2: A reader pointed out that Hunt apologized to The Korea Federation of Women’s Science & Technology Associations (KOFWST) a while back in a press release. Which is commendable.

Since some people failed the grasp the point of the comic, which is titled “The Trouble with Nobel Prizes” and not “Nobel Prize Winners”, I’ll do the bad thing and spell it out: It’s about defending people on past merits alone, as if their accomplishments absolve them of any wrongdoing. The comic is only tangentially related to Hunt, who was just the most recent example of rabid fandom. I’ll continue to post this comic every time some GREAT MAN OF SCIENCE makes an inappropriate remark.

When Nobel Laureate Tim Hunt made his infamous “trouble with girls” remark, we learned two things:

As the the conversation around Hunt’s remarks in the greater context of sexism in science rose, Hunt’s supporters did the truly classy thing of shooting the messenger. Connie St. Louis, director of the science journalism at City College London, found her resume called into question by such esteemed publications like the DailyMail and Breitbart.

Seemingly ignoring the fact that Hunt went on the air to say he was serious about women being disruptive to science, his defenders claim his comments were made in jest. Something we all already knew. Something that we already said wasn’t funny. As such, “It’s just a joke” has become the rallying cry of a whole population of people who have missed the point.

Brian Cox even went as far as to go on the radio and simultaneously bemoan the lack of women in STEM while trying to claim sexism in science is a problem of bad PR, referring to it as a “perceived air of sexism.” You know science has a problem with sexism when science popularizers think it doesn’t exist. (It does, and it’s terrible.)

But going back to the Nobel Prizes, I may have some upsetting news:

So don’t write to me saying I don’t care about science because a poor guy tarnished his own gold star by making a bad, sexist joke and got called out on it. Instead, ask yourself how much you care about science that you’ve allowed the past to supersede the future. Take a long look at the choices that led you to put science before people. Instead of blindly defending an old man with a medal, try to listen and reflect upon yourself and the society that led you to defend him in the first place. Then GTFO.

Special thanks to Matthew R. Francis, Rachel Feltman for making me bust laughing at a future line of GREAT MAN OF SCIENCE products. Also to Matt Lubchansky, who set up the most fun-to-draw precedent for portraying internet randos jumping into your mentions.