Slipping into this ‘skin’ turns any object into a robot

Robotic skins could have a place in space (and on stuffed animals). 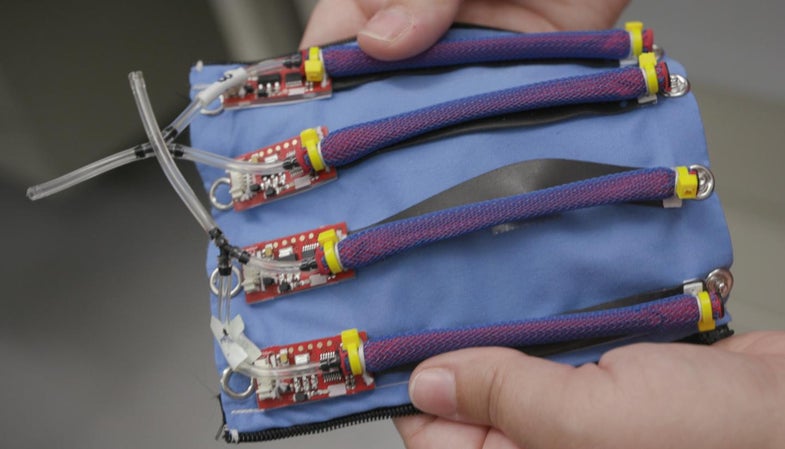 When you think of robots, usually you think of a 3D being that manipulates the world around it. But Yale University researchers took a different tack, turning away from nature to design “robotic skins” that wrap around existing objects and manipulate them from the outside. It’s an out-of-this-world solution intended to help with space-age issues, although its inventors hope it will have applications here on Earth as well.

“It’s a flat robot that has… artificial muscles embedded in it and sensors to detect how much those muscles have contracted,” says study author Joran Booth. “We can control the things that it’s wrapped around.”

Potentially, any soft object could become a robot with the skin slipped around it: a piece of foam tube, a ball, or even a stuffed horse, as is shown in a video released by Yale.

Depending on what the object underneath is and how the skin is applied, the robots can be used for all kinds of different things.

In an environment like space, where astronauts have only limited carrying capacity but may need to perform unforeseen tasks, these robots, which don’t take up much space and can help adapt existing objects, may prove an asset. They were designed in the soft robotics lab of Rebecca Kramer-Bottiglio, also known as the Faboratory, with a specific eye to off-world utility.

After NASA solicited soft robots for spacefarers, Booth and Kramer-Bottiglio wrote in an email to Popular Science, Kramer-Bottiglio started to think about “some of the constraints when sending robots into space—mainly the high cost of transport per unit mass and volume. The question I ended up with was: What if, in addition to trying to reduce the weight and size of robots for space applications, we tried to reduce the number of robots as well?”

Part of the project that proved unexpectedly difficult was getting all the parts of the robot to work together—the artificial muscles, the “skin,” and the sensors that controlled their relationship to one another. The team struggled to help the sensors understand the length of the artificial muscles and make the whole thing work together. In the paper, they demonstrate that they were able to make different shapes of skin and types of “muscle” move as desired.

In the future, though, “the potential types of robotics skins will be very large,” Booth says. From the examples in the paper—two rectangles, an elastomer skin with pneumatic “actuators” (AKA muscles), a fabric skin with metal alloy actuators, and a fabric triangle with alloy actuators along all the sides—he says there’s a lot of room to grow by mixing and matching components. These flat robots have a host of potential uses, from creating a posture-correcting shirt featured in the paper (shown above) to a multi-component gripper for grabbing objects.

“Our concept is simple, but interestingly we couldn’t find anything like it in the literature,” Kramer-Bottiglio wrote. “We think this is because the concept isn’t exactly bio-inspired—we haven’t found any examples of natural organisms with completely passive bodies and active skins. But, when constructing artificial systems, this approach gives us an enormous design space.”

The only question now is what to name a flat robot. Pancake?