Take a look, it's in a book. It's reading robot. 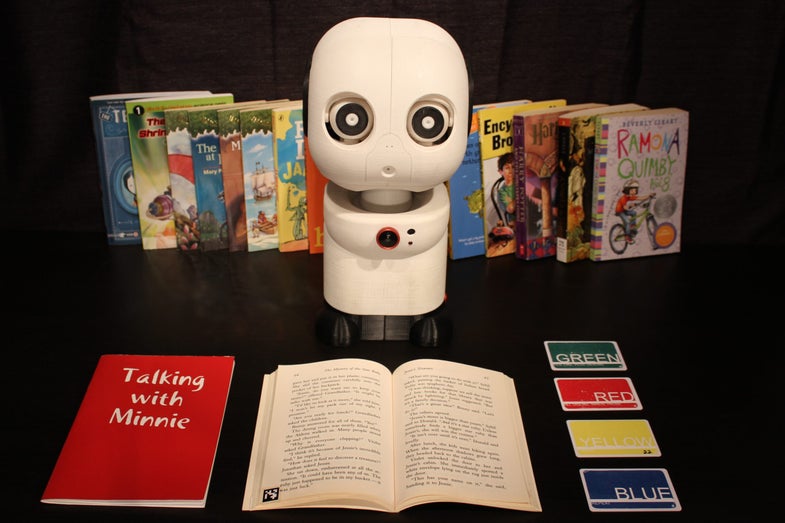 “Are you ready to read?” the little robot asks the boy. The robot’s name is Minnie, and it’s designed to turn reading alone at home into a group activity. Researchers from the University of Wisconsin at Madison just published a small study suggesting that having Minnie around helped kids get into reading—and get more out of it.

By the end of the two-week long experiment, some of the participants—10 boys and 14 girls aged 10-14—felt Minnie was expressing emotions, and thoughts about the books they read. The paper mentions that one child said they could “talk to her about the book” and another that “it made me want to read more because it made you feel like you had to make it happy.” Given the low literacy rates among both adults and children in the United States, anything that can get kids involved in reading seems helpful. This is extra-true at home, because parents may not have the time, or the skills, to help their child learn to read effectively.

Like many things to do with social robotics, statements like these might seem as if they’re treading on the edge of the Uncanny Valley. After all, Minnie doesn’t really have emotions or thoughts—just pre-programmed responses. But the study findings could have broader implications for that burgeoning field by pointing to a place where having a robot around could actually be helpful: specific activities. A social robot doesn’t have to be smart at doing everything to be helpful—and as anyone who’s ever argued with Siri can attest to, “smart” is a high bar. It just has to be good at doing one thing: in this case, reading. Its authors, educational psychologist Joseph Michaelis and computer scientist Bilge Mutlu, say the key to Minnie’s success with even reluctant readers lays in its ability to join in on an activity, providing a social component similar to a study buddy—or even a private teacher.

Unlike virtual assistants such as Alexa or Google Home, Minnie was designed to provide meaningful social interaction to reading middle-schoolers. Its presence actually enhanced their engagement with reading material, and the design focus on one activity allowed even this relatively simple robot to help young readers focus. “We wanted to replicate what a teacher or somebody who was interested in reading as an educational goal might actually do,” says Michaelis. Minnie can be read to and can discuss the material it is being read with preset statements. It can also recommend books that a reader might be interested in, thanks to a simple algorithm.

Minnie was designed to interact with kids about the specific content of what they were reading, incrementally revealing things about its backstory and personality in response to content in the books. “We were going to incredible lengths to try to create a realistic experience,” he says. An example: when kids read The Night of the Living Dummy, a book that includes a twin, at the appropriate passage Minnie says, “that’s really cool. I have a twin sister too. She looks just like me, except she has green eyes.”

Minnie is just over a foot tall, with a humanoid face that occasionally wiggles and blue eyes that blink and move to help convey emotions like thoughtfulness. Below its chin is a small camera that enables it to “see” the pages of specially tagged books and response cards that readers hold up to talk to the robot. In its torso is a microphone that enables it to hear a book being read to it and a speaker that lets it respond out loud.

It stayed with families for two weeks. During that time, it read with middle-schoolers from a selection of 25 books, which included kid favorites like Ramona Quimby, Age 8 and some of the Goosebumps series. Over that time, Michaelis says, Minnie became part of the family to a degree they didn’t expect.

By the end of the two-week experiment, he says, “they were excited to work with it and attributing these emotional and personality traits to the robot.” At least one family dressed the robot up (as a Minion from the movie Despicable Me), and reading with Minnie had become a group activity for some families. “These are things you can’t really get in a lab setting,” says Michaelis. “So it was very nice to be able to get this in homes to see how that really looked with kids.”

For people who are concerned about too many non-human interactions in their child’s lives with Google Home or iPads, the idea of a robotic reading buddy might be extra-unsettling. But unlike Alexa, Minnie can only work with one task, and that only using cards and specific books. Even if it expands its scope to directly interact with readers, it’s not going to have the same omnipresence as a virtual assistant in a smart home. And maybe that’s a better way to think about artificial intelligence—as a tool whose presence in the life of people, especially children, is limited to certain activities.

With just 24 readers involved, the study wasn’t big enough to make generalizable conclusions about what would work for everybody. But Mutlu says it does point to an area of development for social robotics: activity-based interactions.

“What we saw was that the robot’s emotional conduct and the content of the activity, the reading itself, really created a bond,” he says.