Teens’ screen addiction might be contagious, and parents are patient zero

New research shows they learned it by watching you. 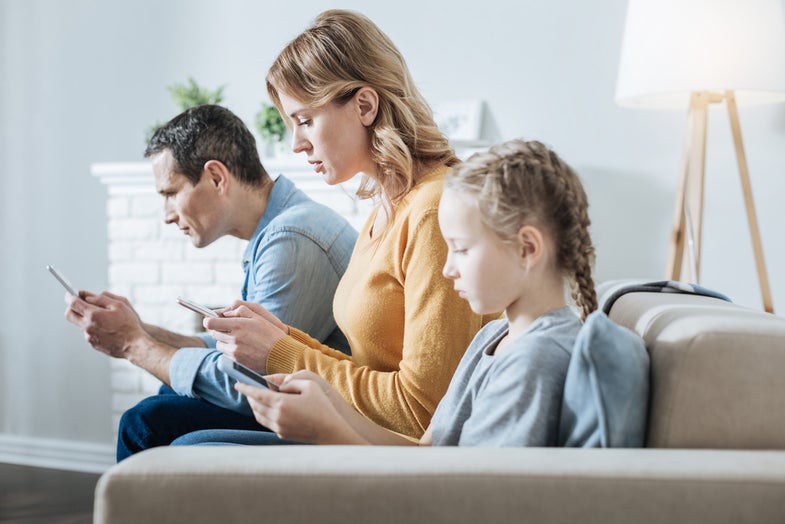 No communication. Nice serious blond little girl holding and looking at her phone while sitting neat her parents and they using their phones too.
SHARE

Every member of the family unit struggles to maintain a healthy relationship with their favorite device, according to the report. Fifty-one percent of teens say their parents are “sometimes” distracted by phones during conversation, while 14 percent say their parents are “often” guilty of this behavior. What’s more, moms and dads are more likely than teens to report being distracted by their phones outside of the home; 15 percent of them say they often get sidetracked by their cell phone at work—just 8 percent of teens say their device often pulls them away at school.

Adolescent health experts like Nicholas Allen, a professor of psychology at the University of Oregon, are hardly surprised by the data. Interactions with parents and young adults in the clinic have provided anecdotal evidence of this phenomenon for years. “The fact you’ve got a young person who’s vulnerable and influenceable, and then you’ve got all of the expertise of the technology sector making all of these technologies as addictive as they can possibly make them—so much so that adults are struggling with regulation—means we really need to have a conversation about this,” he says.

We can form nasty habits at any age, but teenagers are uniquely susceptible to adopting problematic behaviors, like smoking, drinking, or scrolling away the hours. As kids prepare to leave the nest, their developing brains are biased for experimentation and risk-taking. This predisposition allows them to explore new facets of their identity and learn to make healthy decisions for themselves. Otherwise, Allen told PopSci in February, “they would just become a carbon copy of their parents.”

The downside of open-mindedness is that makes teens especially susceptible to mobile-device overuse. “The things that they have always been interested in (making social connections with peers, exploring issues to do with identity and sexuality) are really facilitated by online social network,” Allen says. Young people today are able to find new information and sources of support and community with ease. But, at the same time, they are also exposed to cyberbullying and radicalization, and often experience severe disruptions to their sleep schedule, which can have cognitive, emotional, and physical consequences.

As the Pew data shows, though, no one is immune to products designed to short circuit our self-control. Social media companies like Instagram, Facebook, and Twitter have poured billions of dollars into designing addictive experiences. Using a bevy of behavioral psychology tricks, they’re able to keep us scrolling, liking, and uploading our own content—even when we don’t really want to.

That’s why parents may be particularly compromised by their own phone usage. “We have an enormous amount of research that tells us that what parents do does model behavior for their children,” he says. But, he notes, “If you are a hypocrite—if you are telling your child to do something you can’t do yourself—that’s going to create more possibility for conflict.”

Concerns about excessive screen time have led some companies to introduce new features into our phones, wearables, and tablets to enable more self-control. In May, Google announced its Digital Wellbeing initiative, which provides Android users easy access to their activity log. And Apple announced its upcoming iOS will come with a Screen Time feature that provides similar tools. These widely-available strategies mimic what technology executives like Steve Jobs and Bill Gates have known all along. The billionaires were just two of many tech executives who placed strict prohibitions on their children’s screen time on the understanding that these devices were designed with addiction in mind.

No phones at the dinner table (Jobs’s strategy) and no phones at all until high school (Gates’s plan) can be useful household rules, but Allen says harsh regulations run the risk of encouraging more negative behaviors. “A certain amount of limit-setting is useful,” he says, “but the most-important thing is to educate kids about the cost and the benefits of new technology.” The hope, he says, it to make teenagers “wise consumers” and “help them become their own best regulator.”

It’s clear that anyone can stumble into the dark shadows cast by the bright light of their devices. But the problems posed by smartphones may have created a unique opportunity for empathy across generations, according to Allen. Instead of parents wagging their finger at their kids’ imprudent behavior, Allen advises, parents can “say, ‘I get it, it’s distracting, and I struggle with this, too, and I’m really working on that.’”