Delivering cooked soup is easy, but it turns out delivering the ingredients to make it is hard. 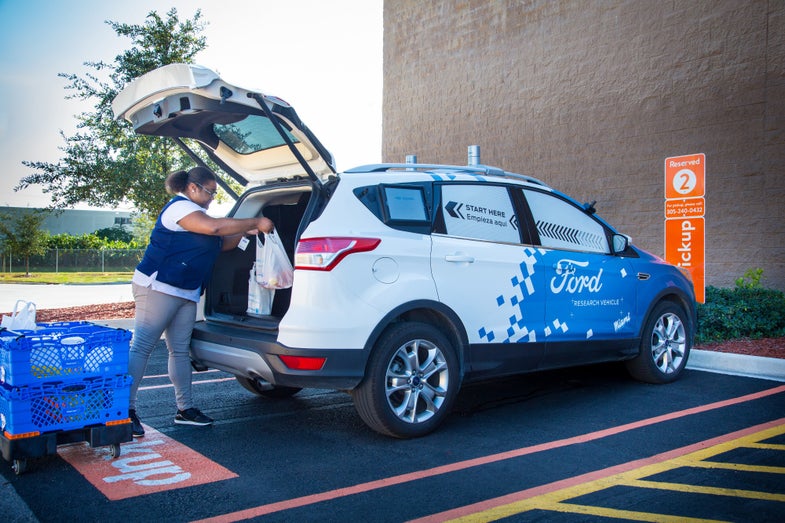 It’s easy to hypothesize about what self-driving cars might make possible. Robot taxis! Autonomous big rigs! Package delivery! But when it comes to actually doing those things, it gets a lot more complicated.

Aside from the regulations and insurance and technologies that must be perfected, there’s actually the tricky business of doing business. That’s why Ford, Walmart, and Postmates have joined forces to test out the future of grocery delivery. It’s a new partnership announced today in Miami, that expands on existing work that both Walmart and Ford are already doing.

Walmart already is testing home grocery delivery in more than 100 cities. It will be available from 800 stores by the end of the year, and Walmart plans to double that by the end of 2019. Ford and Postmates have been working together to see how autonomous cars might be used to handle deliveries of packages. Now, the three companies are working together to develop a pilot program in Miami that will see Ford’s autonomous test cars delivering groceries to end users. It comes in a similar time frame to similar pilot programs like this one from Kroger.

Ford has already been working with Domino’s to explore delivering pizzas autonomously, but groceries are a lot more complicated. In a blog post announcing the partnership, Ford mentions the larger and more varied orders that one might get from a grocery store, versus a restaurant. Accommodating perishable goods, and keeping different orders separate in the vehicle, are specifically challenging. Celery doesn’t travel the same as chicken or broth, but you need all three to make chicken soup.

“Over the next couple of months, we’ll be working closely with Walmart to understand its operations,” writes Brian Wolf, Ford’s Autonomous Vehicle Business Lead. The two companies will “identify what goods we can feasibly transport, and pinpoint any issues that may need to be addressed to successfully deliver orders via self-driving vehicles.” It’s this kind of large user sample that gives companies the kinds of datasets they need to make relevant logistical observations and enable automated systems.

Will the vehicles need to be refrigerated? Will they need separate compartments for different orders? How will customers feel about walking out to a vehicle outside their home to get their grocery order? What if something in the order is wrong? These are all questions that will need to get answered.

Delivering groceries also differs from shuttling people around in self-driving vehicles. Walmart has a deal in place with Alphabet’s autonomous vehicle company, Waymo as part of a program that brings the people to the store rather than bringing the groceries to the customer.

“Before self-driving cars can go mainstream, we must get a better sense of how people want to interact with them,” writes Tom Ward, Senior Vice President of Digital Operations for Walmart US.

Food deserts, areas where it’s hard to find fresh fruit, vegetables, and other healthy foods, are a real problem in some impoverished areas. A lack of quality grocery stores within walking distance makes it extraordinarily difficult for poorer families in many cities to make healthy buying decisions. It’s possible that autonomous vehicle grocery delivery can solve this pernicious problem.