This car doesn’t need a steering wheel or pedals

When the GM Cruise AV says “self-driving,” it really means it. 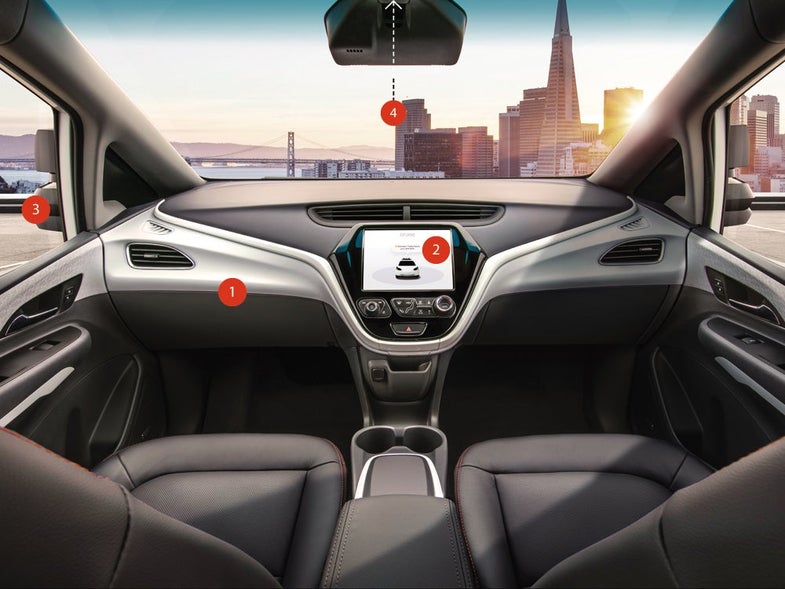 You can wind up in a self-driving Uber right now in cities like Pittsburgh and Phoenix. But those vehicles still have quaint automotive ­essentials like steering wheels, pedals, and chaperones (“­drivers”). When General Motors rolls out its Cruise AV in 2019, though, the electric ­vehicle’s computers will be in control—all the time—eliminating the need for manual controls. The sedan will join a fleet of app-hailed ­autonomous taxis. Once the ride shows up, you can space out in its ­decidedly ­different cockpit, which offers twice the chance to claim shotgun.

1. No wheels or pedals

The car’s onboard computers make all of the driving decisions—including steering, accelerating, and braking—which cuts out manual controls and the possibility of human interference. The digital system has multiple backup circuits that operate simultaneously, so crucial elements (electrical power, navigation, and crash detection) won’t completely fail, even if there’s a malfunction.

Passengers don’t need to watch the road; instead they can keep their eyes glued to the LCD touchscreens in the dashboard and seat backs. The displays show details about the trip, and allow riders to request stops (maybe a coffee?) along the way. The panels are the primary interface between human and vehicle, so they also handle details like climate control and bumping the perfect playlist.

The Cruise AV has 21 radar sensors, 16 cameras, and five laser-based lidar units to observe every detail about its surroundings. Each tech has its strengths: Camera and lidar data can quickly identify pedestrians, cyclists, and traffic-lane lines to keep the car centered on the road. Rotating radar sensors where the side-view mirrors would be track distant, high-speed hazards like oncoming traffic.

The Cruise has emergency buttons above each passenger row. Hitting one tells the car to pull over as soon as it can safely do so—it won’t panic and slam on the brakes like a human might. Riders can also summon a roadside-assistance system that provides remote help from a live human in case of a technical issue. That system also automatically kicks in if there’s a crash.