Thanks to particle accelerators, paleontologists can now don the best X-ray specs in the world 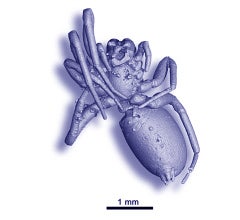 Lately, paleontologists have been choosing odd bedfellows to study rare, precious fossils: particle physicists. At the annual meeting of the American Association for the Advancement of Science this weekend, several researchers reported on how synchrotron particle accelerators—the world’s most powerful X-ray machines—are revealing new details about biological relics such as amber-trapped Cretaceous bugs, the celebrated bird-dinosaur Archaeopteryx, and what appears to be the world’s only fossilized brain.

A 3D X-ray image of an arachnid trapped inside a chunk of Cretaceous-era opaque amber found in Charentes, France.

Synchrotrons are racetracks for electrons: circular machines hundreds of yards in diameter that rely on magnetic and electric fields to accelerate a particles beam around it. The process radiates high-energy X-rays. When operators place an object in an X-ray “beamline,” the ultra-bright light can illuminate structures as small as molecules or even atoms.

Typically used by chemists, molecular biologists, and materials engineers, synchrotrons are now attracting paleontologists eager to see inside rare fossils without harming them. Several weeks ago at California’s Stanford Synchrotron Radiation Lightsource facility, scientists scanned a fossil of the primitive avian dinosaur Archaeopteryx—the “missing link” that made the case for Darwin’s On the Origin of Species when it was first discovered in 1861. The 145-million-year-old limestone slab is the best preserved of the ten Archaeopteryx specimens found so far. “Some of the molecules of the original animal [may] still be in there, possibly part of bones or soft tissue,” said Uwe Bergmann, a physicist at the Stanford synchrotron. The researchers are now analyzing the chemical composition of the fossil from the synchrotron scan. Expect reports on their findings in the coming months.

Across the globe, the brightest synchrotron in Europe—the European Synchrotron Radiation Facility (ESRF) in Grenoble, France—employs a staff paleontologist, Paul Tafforeau. He works with physicists to adapt the beamlines to image the hidden internal structures of fossils at incredible resolutions. Tafforeau has used the X-ray light to penetrate hundreds of chunks of opaque amber—essentially, rocks—to resolve 100-million year old fossil beetles, ants, wasps, and other insects trapped inside. The insect scans are then enlarged to palm-size and rendered into ivory plastic models using 3-D printers. Researchers can manipulate and analyze the bugs with far greater sensitivity than an onscreen 3D model. [Click to watch an animation of the amber-scanning process.
A newly discovered dragonfly was even named after the head of imaging at the Grenoble facility, José Baruchel. “It’s the first species that was dedicated to a synchrotron physicist,” said Tafforeau.

Tafforeau also said that French and American scientists have recently turned up a remarkable object during a scan of the fossilized skeleton of a 300-million-year old shark: its brain. The team claims it’s the only fossil brain known. Full details on that finding will come to light in a few weeks when it publishes in the journal PNAS—stay tuned for an update.