LHC May Locate The Higher Dimensions Next Year 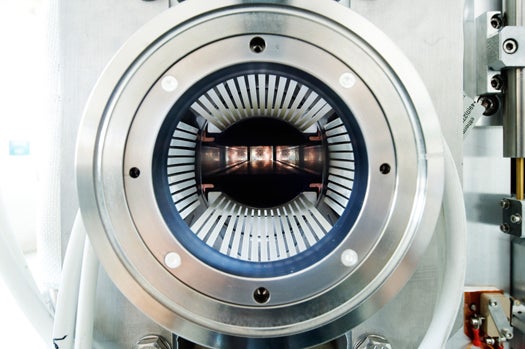 The collimation system protects the LHC against damage due to beam loss. Claudia Marcelloni, CERN
SHARE

The Large Hadron Collider took several years to construct, and it was expected that it would take several more to begin yielding game-changing scientific data. But, to the delight of CERN researchers, that hasn’t been the case. The LHC is already yielding reams of valuable scientific data, and a bulletin released by lead researchers Monday indicates that the ATLAS experiment is working so well that researchers should be able to confirm or rule out the existence of the Higgs Boson by next year, and could even find evidence of extra dimensions before the end of 2011.

The pace of experimentation and accuracy of data coming from ATLAS – one of the LHC’s primary experiments – has stunned even the very researchers who conceived the experiments. To quote Fabiola Gianotti, a spokeswoman for ATLAS:

We are producing new results all the time now. We plan to release a new wave of results early next year, for the 2011 winter conferences. Given the record luminosity achieved by the machine, by the end of 2011, combining ATLAS and CMS, we can expect to be able to exclude the existence of the Higgs boson over the full allowed mass range, or else to collect evidence for it if its mass is greater than 125 GeV. We could also discover Supersymmetry up to masses of almost 1 TeV and new forces up to masses of the carrier particles of 1.5 – 2 TeV.

ATLAS is currently on break from searching for the theoretical Higgs boson, dark matter, and proof of additional dimensions so it can record data from the lead ion collisions currently creating miniature Big Bangs in the collider. The heavy ion collision experiments will run through early December, when CERN will take a Christmas break to perform maintenance on the accelerator. But the LHC will fire back up again in early 2011, and from the looks of things it’s shaping up to be a scientifically revealing year (in this dimension, anyhow).