Hadrons are so last-decade anyhow 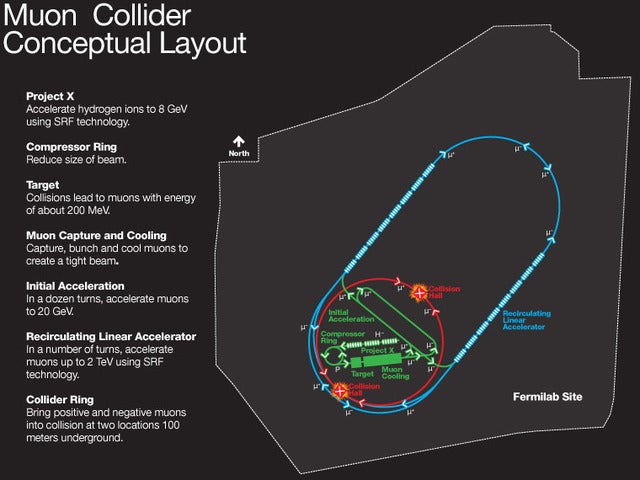 Tomorrow Fermilab researchers will power down their Tevatron particle collider for the final time, marking the end of an era. But for some, that era is so over anyhow. Hadrons, like last season’s handbag, have had their time in the spotlight. The next hot trend in physics is muons, and all the cool kids know it. That’s why Fermilab physicists are already taking a hard look at muon colliding technologies as a possible next move in the game of international physics research.

Here’s where the game stands. America dropped the ball when it dumped millions into the Superconducting Supercollider only to shutter the project back in the ’90s. It was the next step in particle physics after Tevatron but it never was completed. CERN took up the mantle of high powered particle physics and now has the LHC, which stands as the largest physics lab in the known universe.

The LHC, like Tevatron, smashes hadrons (of which protons are a varietal). These are not fundamental particles, but are made up of smaller subatomic pieces, so when they collide the energy from the collision is split between the constituent quarks. If we could smash fundamental particles–those are particles that aren’t composed of other particles, but are already at the single-component level–more energy would go directly into the collision, and thus into spawning all kinds of exotic matter. Which is exactly what physicists want from a good collider.

And that’s why Fermilab’s physicists are thinking about muons these days. Now, here’s the cool trick–in order to smash muons, they’re going to have to bend time a little bit.

Muons are like electrons but heavier–about 200 times heavier actually–which is a good thing, considering we’re trying to manipulate and smash them together. But they’re also highly unstable, with a life spanning just a few microseconds. After that, they decay into a bunch of other less-useful stuff. A few microseconds isn’t very long, but there is a way to stretch it out long enough to be useful by playing with the rules of relativity.

It would work something like this: You get muons from high-energy particle collisions, which generally impart a good deal of energy to the particles they spawn. Which means the muon, from the moment it falls out of this particle collision, is moving very fast. If you can then grab it and give it a little accelerating up toward the speed of light, relativistic effects start to take over. As the muon approaches light speed, time slows down for the muon relative to the time frame of the surrounding accelerator. So those two microseconds stretch into a lifetime that’s long enough to be relevant to physicists–that is, long enough to smash two of them together.

It’s a complex trick but a feasible one, and such a collider isn’t very big–it would fit in Fermilab’s current footprint. And it would put Fermilab right back at the cutting edge of particle physics–not that it ever really left.