A picture starts to emerge from the fog 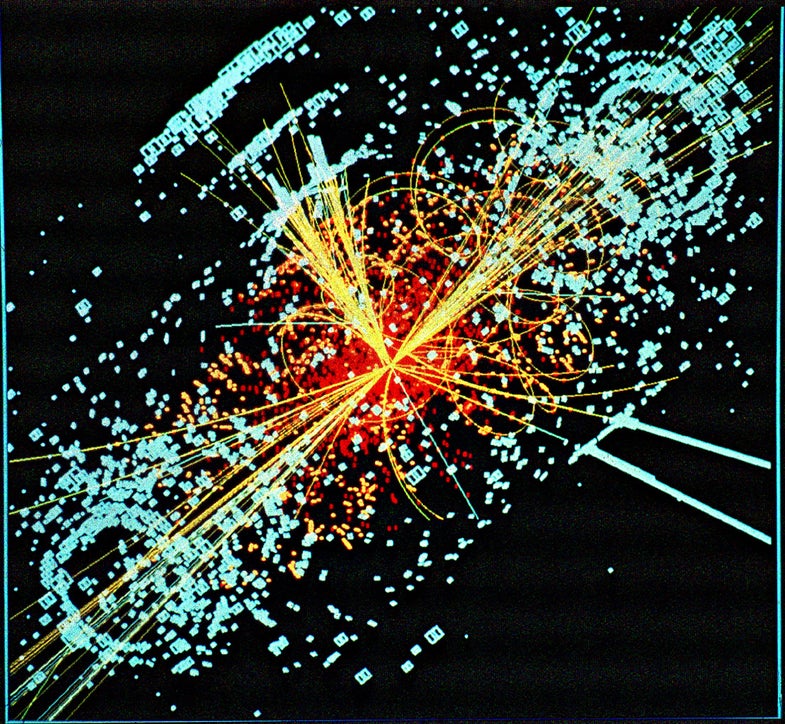 We know, we’ve been hearing rumors about interesting “data bumps” for months now, but this is big news — over the weekend the world’s two greatest particle smashers announced tantalizing hints that the Higgs boson may soon be within reach.

Again, no one is shouting eureka just yet, but taken together, collision data from the Large Hadron Collider and the Tevatron suggest scientists may have seen the first glimpses of the elusive Higgs particle, the grand prize of physics.

At a conference on Friday, the Atlas and CMS teams at the LHC reported finding a large number of interesting particle events between a mass range of 130 and 150 giga-electronvolts (GeV). Then over the weekend, several media outlets reported the DZero and CDF teams at the Tevatron also saw some extra signals around 140 GeV.

Though the LHC data is considered to have a higher degree of certainty, neither set of data is close to conclusive, physicists warned. But that didn’t stop several theorists from using words like “tantalizing,” “exciting” and “intriguing.”

“There might be some picture emerging from the fog,” DZero spokesman Stefan Soldner-Rembold told the BBC.

Even oddsmakers are feeling confident. Today, the Irish bookmaker Paddy Power slashed the odds on the Higgs boson being scientifically proven to exist before the end of 2011 from 12-1 to 1-3.

Both the LHC and Tevatron have been hurtling subatomic particles around a ring, colliding them at huge energies to blast them apart and study the pieces. This has already yielded plenty of interesting physics, including the announcement of a brand-new particle just last week. The point is to prove what’s called the standard model of particle physics, the system of particles and forces that governs the universe. The Higgs boson, named for the physicist who proposed its existence, is the most sought-after piece of the standard model puzzle. The Higgs particle is thought to endow other particles with mass, and it would unify the weak nuclear and electromagnetic forces.

While the Tevatron and LHC have been operating at high power, especially in the past two years, scientists have been studying the remnants of particle collisions to look for signs of the Higgs. They haven’t seen in yet, so they have been able to determine a host of electronvolt ranges in which it doesn’t exist. But the interesting activity at 130-150 GeV suggests it could exist in that range. (Some physicists are arguing the opposite, that the new data shows the Higgs doesn’t exist in that range. Check out this helpful post by MSNBC’s Alan Boyle for further explanation.)

Either way, the data will help narrow down the mass-energy ranges in which the Higgs may be found. Within the next year, physicists will either find it or rule out its existence, the director of CERN told the BBC.

If it doesn’t exist, that means the standard model must be wrong, and that would be very interesting. So either way, the news coming out of the Tevatron and LHC will remain intriguing for some time. Stay tuned.