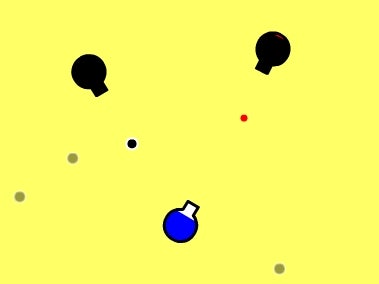 Newton’s Third Law is often quoted as “For every action there is an equal and opposite reaction.” As N3wton‘s title suggests, the Third Law is at the heart of this little physics-oriented computer game. Click to play. (Warning: there’s music.)

We can restate the Third law more specifically: “If object A exerts a force on object B, then object B exerts a force of equal magnitude, in the opposite direction, back on A.” Interestingly, many people have a hard time intuitively accepting the “equal” part of the law. For example, consider the case a train moving along its track, and an unfortunate fly traveling in the opposite direction on a collision course. When the train and fly collide, the train does not exert the greater force. The force the fly exerts on the train is exactly equal to the force the train exerts on the fly — it is simply the effect of that force that is different on each of these objects. (It doesn’t take that large a force to squish a fly, but it takes an awful lot of force to change the motion of a train.)

In “N3wton,” our cannon recoils every time we fire a ball, in accordance with Newton’s Third Law. The force exerted on the ball when the cannon fires imparts a relatively large acceleration to the ball, resulting in a large velocity when it leaves the cannon. The equal reaction force accelerates the more massive cannon backwards, to a lesser degree. However, without friction the cannon should continue to move backward indefinitely without stopping — that’s Newton’s First Law. That would make the game nearly impossible, and it’s pretty difficult as it is once we get past the first level. Therefore, since we see that the cannon comes to a stop in a short distance, we can assume that the surface on which the cannon sits has significant friction.

When balls hit the enemy cannons, they drive the cannons backward, but the balls bounce back themselves due to the reaction force. Exactly the same happens when the enemies’ projectiles collide with our cannon. Nevertheless, when the enemy cannons fire, they do not recoil! No fair. Either this is a violation of the Third law, or the cannons are somehow anchored when they fire but not anchored when they’re struck by an opposing cannon ball. Perhaps this is some kind of alien cannon technology. Anyway: because of the Third law recoil, it is sometimes necessary to fire directly away from the enemy, to push the cannon back into play. Fortunately, ammunition is unlimited.