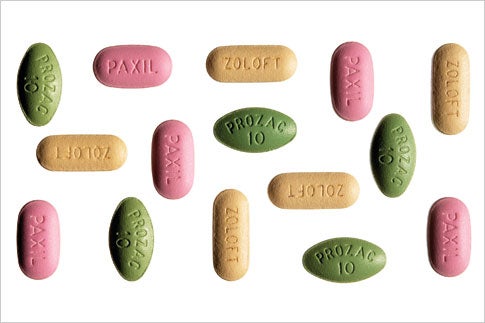 Last fall the FDA ruled that all antidepressants must carry the strongest possible safety warning after a review of tests revealed that the drugs trigger suicidal thoughts in 2 to 3 percent of kids and teens taking them.

An estimated 20 million Americans have at one point or another relied on Prozac or one of its chemical siblings, including Paxil and Zoloft, to ease depression or anxiety. For most adults who take them, the drugs, known collectively as selective serotonin reuptake inhibitors, or SSRIs, work as advertised: Mood improves with increased levels of the brain chemical serotonin.

But a growing body of research is confirming long-standing suspicions that SSRIs harbor a dark side. Instead of easing depression, in some patients they may intensify it and even induce suicidal or violent behavior. This past October, Columbia University researchers stoked the debate with a study suggesting that exposure to Prozac in the womb and in early childhood may permanently alter the brain’s circuitry and disrupt neural development, leading to serious emotional disorders later in life. Scientists say that the results, published in the journal Science, raise serious concerns about the long-term safety of SSRIs in the estimated 1.75 million children now taking them.

In the experiment, researchers gave Prozac to a group of young mice during a period of brain development that corresponds with the last trimester of pregnancy through eight years of age in humans. Then they conducted a series of tests designed to measure confidence and ability to cope with stress. Compared with normal mice, adult mice given Prozac early in life were less willing to take risks to earn rewards, took longer to escape unpleasant sensations, and were more fearful of new surroundings–all behaviors associated with anxiety and depression in animals.

The underlying mechanism for this paradoxical effect is still unknown, but the investigators suspect that Prozac may impede the flow of naturally occurring serotonin in the brain. In healthy adults, serotonin acts as a chemical messenger that regulates mood by expediting the transmission of nerve impulses from one brain cell to another. In infants and young children, though, the chemical also spurs the maturation of brain systems in the cerebral cortex and limbic system that govern emotional function.

Of course, it’s a big leap from mice to people. But other research indicates that SSRIs may have the same influence on humans. A study conducted last February at the Carolinas Medical Center in Charlotte compared 17 babies born to mothers who took SSRIs throughout their pregnancy with 17 babies whose mothers
didn’t. The newborns exposed to the antidepressants were more likely to have tremors, became agitated more easily, and exhibited unusual sleep patterns–all symptoms of a stressed nervous system.

Though intriguing, these results are by no means definitive, and experts point out that not treating expectant mothers and kids who suffer from depression can have serious consequences. Babies are more likely to be premature, and mothers may be unable to care for them. Yet as Emory University psychologist and SSRI expert Paul Plotsky points out, there is a distinct possibility that “we may be changing the brain in subtle ways that we still don’t understand.”