Scientists Insert A Light-Emitting Bioprobe Into A Living Cell

Let there be (tiny laser) light! 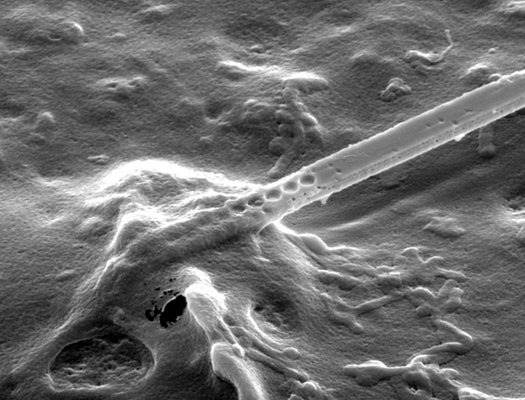 A group of Stanford researchers have inserted a nano-sized, light-producing bioprobe into a single living cell for the first time, which could have implications for future cancer treatments and drug development.

The “nanobeam” constructed with light-producing quantum dots was embedded inside a cell from a prostate tumor without damaging it or interfering with its normal function and reproduction.

The nanobeam, made of a sandwich of thin layers of a semiconductor called gallium arsenide and a photonic crystal containing quantum dots, is only a few microns long and a few hundred nanometers thick. Holes through part of the beam “act like a nanoscale hall of mirrors,” according to Stanford’s news release, amplifying the light at the center of the rod in photonic cavities.

Previous research had shown it is possible to insert nanotubes and electrical nanowires into cells, but this is the first study to show it can be done with complex optical components. The results were published online in the February edition of Nano Letters. 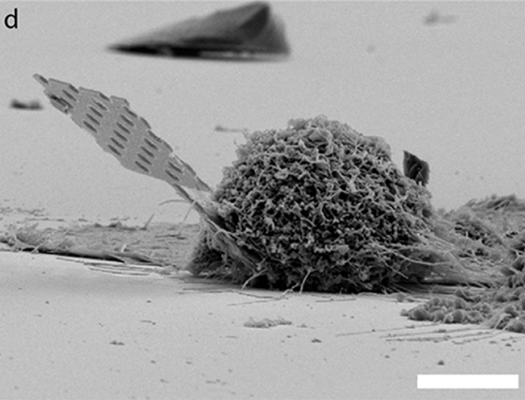 A nanobeam with a handle tip inserted into a cell.

Once the needle-like beam is inserted into the cell, it begins emitting light. When the cell reproduced, the nanobeam continued to function within one of the daughter cells. The researchers were able to track a single cell for eight days.

Biophotonics, the study of how light interacts with biological material, incorporates lasers and LEDs into medical and life science research. Photonic techniques have possible applications for both medical diagnoses and therapy, and biophotonic cancer therapy will be a special focus at this May’s Laser World of Photonics trade fair in Germany.

This nanoprobe could be an important breakthrough for photonic cancer therapy. The researchers suggest that it could be used to develop patient-specific cancer therapies, where an individual’s treatment could be tailored to their own genetic needs.

The probe can be used to detect specific proteins within the cell, and could be developed to sense DNA or RNA. When coated in molecules or antibodies that attract the desired protein, any of that protein within a cell will cling to the nanobeam like iron to a magnet, causing a shift in the wavelength of light it emits. This could be used in drug testing to see immediately if a drug is producing or inhibiting a certain protein.

“Devices like the photonic cavities we have built are quite possibly the most diverse and customizable ingredients in photonics,” senior author Jelena Vuckovic explained. “Applications span from fundamental physics to nanolasers and biosensors that could have profound impact on biological research.”