How International Guidelines For Lab Mice May Interfere With Cancer Research

A new study examines the effects of standard lab temperatures on mice used in cancer studies. 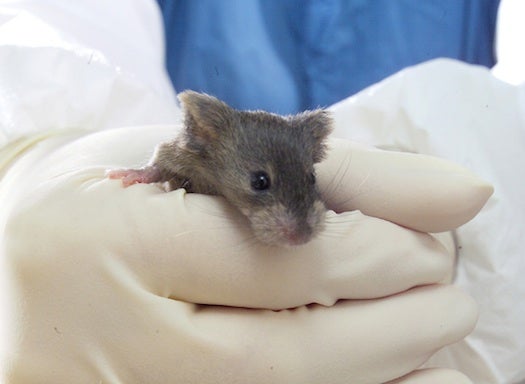 Given the choice, a mouse wouldn’t keep his house at what’s considered “room temperature” for people. Mice are smaller. They lose heat faster. They generally like hanging out in places that are about 30 degrees Celsius (86 degrees Fahrenheit), but international guidelines for lab mice say they should be kept at human room temperature, 20 to 26 degrees Celsius.

Now, a new study says such guidelines could have a profound effect on studies done in lab mice. Mice kept in the recommended temperature range formed and grew tumors more quickly than mice living in their own preferred temperature, the study found. The chilly mice also didn’t mount as much of an immune system response against tumors as comfy mice.

This doesn’t mean you can justify turning up the heat in the winter as cancer prevention. (That is an issue you just need to talk out with your roommates, okay?) Instead, it suggests that first-line health studies done in mice—of which there are an enormous number—may all have this flaw. Immune system-based therapies are under intense research right now, but lab mice’s living conditions may make the treatments seem less effective than they truly are, the researchers wrote in their paper, published in the Proceedings of the National Academy of Sciences.

One interesting finding from the study that underscores the importance of temperature: Given a choice of five chambers kept at different temperatures, mice with tumors preferred the warmest one, at 38 degrees Celsius, although healthy mice usually prefer the 30-degree room. This suggests tumor-stricken mice feel colder than their healthy peers. Ars Technica points out human breast cancer patients have complained of feeling cold, too.

The Scientist talked to several researchers not involved in the study about how this will impact cancer science. One cancer therapy researcher told the magazine, “Everybody thought that mice would be fine at room temperature, but nobody ever thought to look,” while another called the study “a game-changer.”