Spotting Cancer Cells in Blood With a 27-Picosecond Camera

A simple blood test that offers early detection of cancer in the human body has long eluded medical researchers, but... 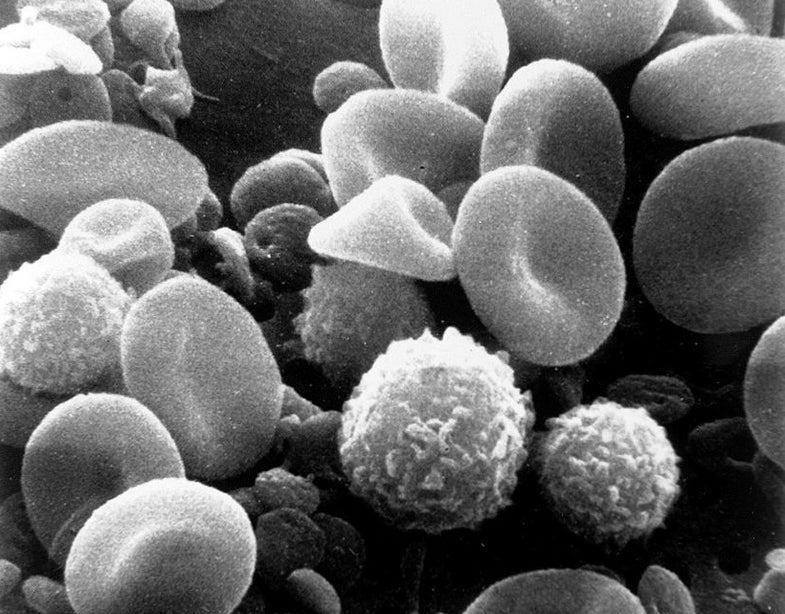 A simple blood test that offers early detection of cancer in the human body has long eluded medical researchers, but a team at UCLA is getting closer. By blending an ultra-fast camera and a powerful optical microscope with software that can process the data they produce at extremely high speeds, the team hopes it can spot circulating tumor cells (CTCs) that have broken away from cancerous tumors in blood samples, potentially making early cancer detection as simple as taking a blood draw.

When a cancerous tumor forms in the body, cells break away and get loose in the bloodstream. These are the aforementioned CTCs and they are a very real threat, helping cancer to metastasize throughout the body. But they also serve as a telltale sign of the presence of cancer in the first place–evidence right there in a person’s blood that tells doctors that cancer is hiding somewhere in the body.

Detecting those CTCs is challenging, however. Blood samples contain a range of cells–red blood cells and white blood cells of course, but also platelets and other particulates–and CTCs are few among the many. In other words, there’s a lot of noise in a blood sample if you are strictly looking for CTCs.

The UCLA team is trying to overcome this noise and zero in on the CTC signal by using a super-fast microscopic camera that it devised some years back, one capable of recording imagery at six million frames per second. Called STEAM (for serial time-encoded amplified microscopy), the technology uses extremely short laser pulses (one billionth of one second long) to image blood samples. That’s like having a shutter speed of just 27 picoseconds, or 27 trillionths of a second.

Such lightning-fast imaging requires extremely fast processing, so the UCLA team’s STEAM camera feeds the data from the camera into a computer that can quickly assemble images and identify the poorly-defined shape of cancer cells against a backdrop of well-defined normal blood cells. They are currently clinically testing the process against lung, stomach, breast, prostate, and intestinal cancers, and hope to soon add ovarian and pancreatic cancers to that list (the latter two are fast-spreading cancers, so early detection is even more important in these cases).

If their clinical tests pan out, the scientists may just have a quick and (mostly) painless noninvasive diagnostic that can quickly screen for various cancers during a routine doctor’s visit, upping the rate of early detection and doubtlessly saving lives.