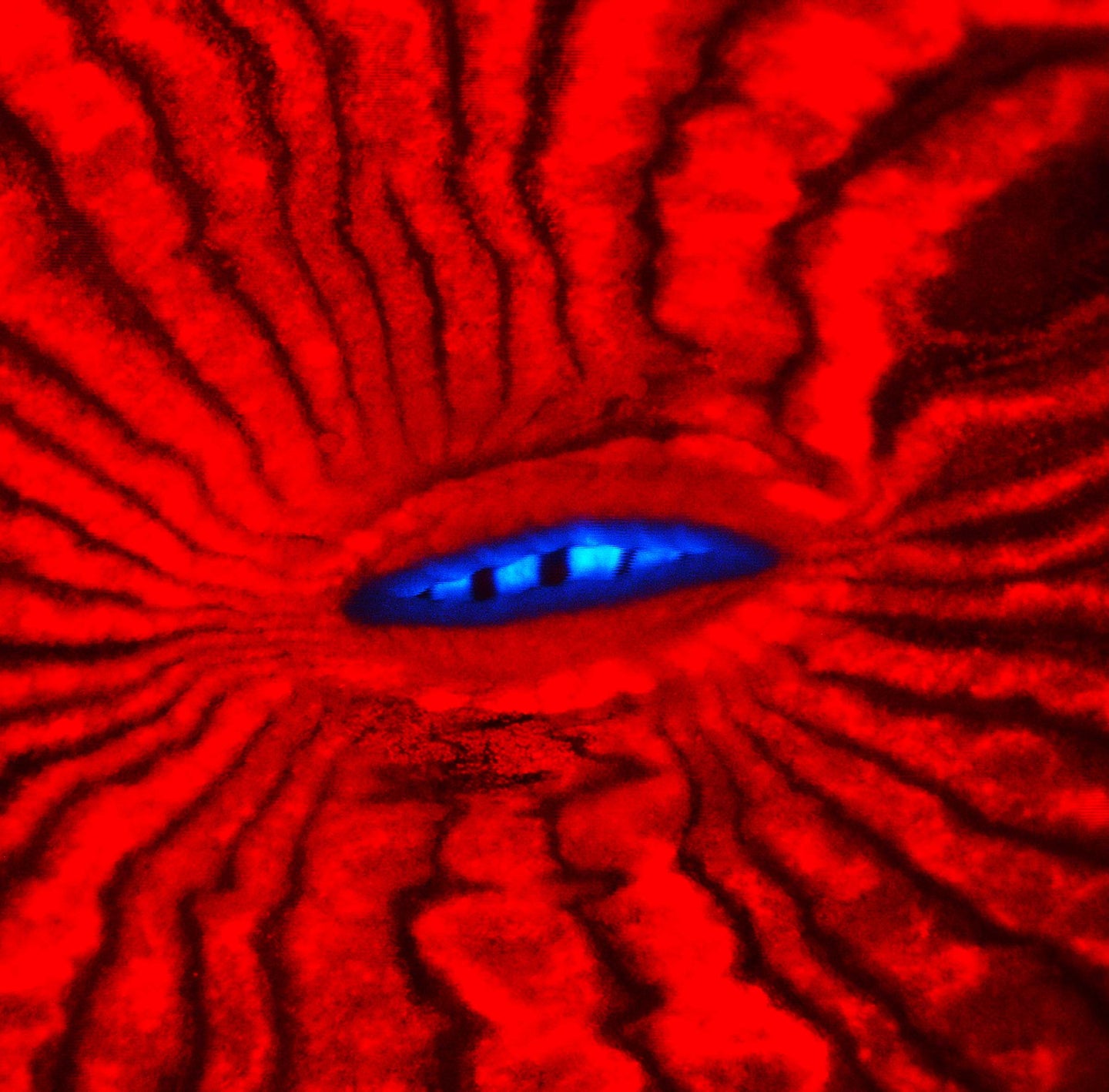 Fluorescence of the mouth region of the reef coral Lobophyllia hemprichii. The orange-red fluorescence of its photoconvertible protein pigments enhances the light penetration within the tissue containing photosynthetic symbionts. J. Wiedenmann
SHARE

In shallow waters, corals’ brilliant pinks, ravaging reds, and dazzling oranges can act as a kind of sunscreen. The fluorescent pigments protect corals’ zooxanthellae—symbiotic algae which coral depend upon for survival—from too much sun. But why would deep water coral, which reside far from the sun’s harshest rays, share such flashy coloration with their shallow cousins?

For a long time, researchers weren’t sure. But a study released Wednesday in Proceedings of the Royal Society B may shed some light on the subject. The research suggests that while surface-dwelling coral use color to help block sunlight, their deep-sea cousins may actually use color to transform light into something the zooxanthellae can use more easily.

By analyzing how well how well different light colors spread through dense layers of zooxanthellae, researchers from the United Kingdom’s University of Southampton, the Interuniversity Institute for Marine Sciences of Eilat, and the University of Haifa were able to ascertain that corals in in deep water make a special type of fluorescent protein that captures blue light and re-emits it as orange-red light. The orange-red light can penetrate more deeply into the coral’s tissue, essentially allowing the coral to spoon-feed the zooxanthellae the light it needs.

To help confirm their findings, they exposed bright red, fluorescent corals and similar but unpigmented ones to simulated deep water light environments in an aquarium. The red corals survived better in the long run that their unpigmented counterparts.

“This is an important step forward in understanding how the mysterious fluorescent pigments in corals work,” says Professor Jörg Wiedenmann, head of the Coral Reef Laboratory at the University of Southampton. “Our finding help us to understand how the amazing diversity of coral colors structures the communities on coral reef.”

Deep red fluorescent proteins like the ones identified in the study, don’t just help corals stay alive—they’re helpful in medical research as well. Individual human protein cells are too small for us to see, but by tagging them with a fluorescent protein helps scientists to watch them in action. By illuminating cells, fluorescent proteins have helped researchers track diseases like HIV and confirm the existence of cancerous cells. In 2008, Martin Chalfie, Osamu Shimomura, and Roger Tsien received the Nobel Prize in chemistry for their discovery and development of green fluorescent protein (GFP) isolated from the jellyfish Aequorea victoria. GFP, however, has its limitations—which is why scientists are continue to hunt for new forms that could be useful in medical research.

But as coral reefs—and oceanic environments as a whole—face increasing threats from climate change, the question of whether or not we can find those useful proteins before they’re gone grows increasingly important. After all, it took Shimomura and his colleagues more than forty years to isolate GFP.