As the planet heats up, hurricanes will become more intense. 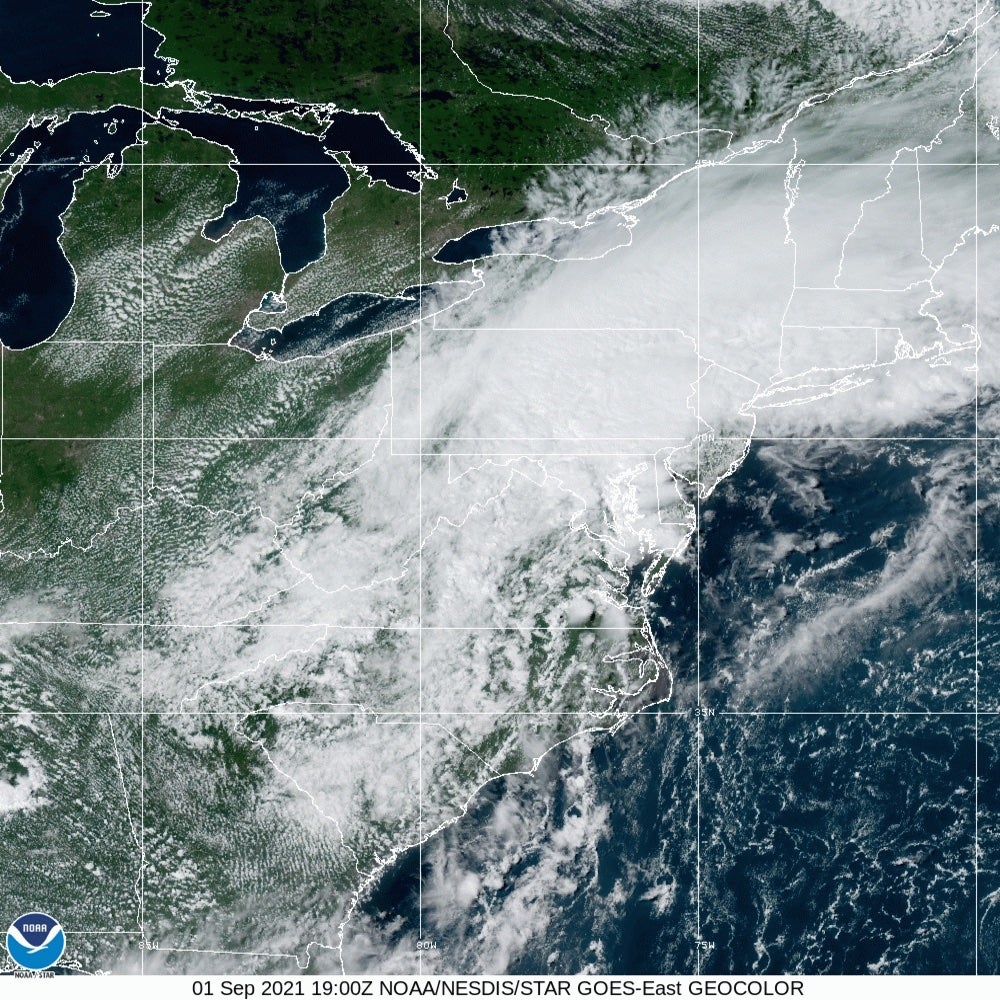 When Hurricane Ida finally moved on from Louisiana and Mississippi, it had weakened to a tropical storm. Shortly after, it became a mass of warm, wet air moving steadily up the US. But its rapid renewal and deluge could be a sign of how upcoming warmer, wetter storms will be felt far from where they make landfall.

As Ida cruised through southern Appalachia, between Mississippi and Pennsylvania, it remained a tropical depression, leading to rainy days but not catastrophic flooding. Although it carried billions of tons of warm water from the Gulf, the moisture stayed mostly locked in its clouds. Most parts of Tennessee and Kentucky saw only an inch or two of rain.

“The basic ingredients you need for heavy rainfall are moisture, instability, and lift,” says Dereka Carroll-Smith, a research meteorologist with the National Institute of Standards and Technology. Thankfully it seemed, Ida was only halfway to being deadly.

Then, around Pennsylvania, something shifted. Ida crashed into a front of cold air and the storm’s warm air began to rise and spin, becoming what’s called an “extratropical cyclone”—a little like a hurricane outside its normal habitat. It was that spinning that unleashed tornadoes in the mid-Atlantic and the kind of rainfall that was once expected only every hundred years or so over New York. (You can watch a visualization from NOAA here.)

As if that wasn’t enough, the storm came on top of an exceptionally wet month. Washington, D.C. had received twice the average rainfall over the past month. With soil already saturated and streams running high, there was nowhere else for Ida’s rains to go.

Carroll-Smith says that storm behavior shouldn’t be a surprise, based on her work modelling inland rainfall and tornadoes after tropical cyclones.

It’s also a sign of what might be coming for the east coast after future storms. As the planet heats up, hurricanes aren’t necessarily predicted to become more common, but the ones that do happen will be more intense. Because warm air holds more water to begin with, research published earlier this year by Carroll-Smith found that future storms could produce significantly more rainfall inland.

For her analysis, to study the interaction between warming-fueled hurricanes and rainfall far inland, Carroll-Smith looked at how HurricaneIvan, which landed on the Gulf Coast in 2004, might have behaved in a hotter world. By plugging warmer temperatures into hurricane models, she simulated hypothetical versions of the storm as they moved inland.

The hypothetical Ivans dumped between 30 and 50 percent more rain inland, hundreds of miles in all directions from the storm. Rain fell harder, too, creating more flood risks.

It’s still not clear how tornadoes will be impacted, though. Going into the research, Carroll-Smith says, her team expected that more intense storms would generate more tornadoes. “That’s not exactly the case” though, she says. “The only thing that’s more consistent is it produced more rainfall, and more intense rainfall.”

Only one of the models showed more tornado formation potential. And other research has suggested that there’s “scatter” in tornado formation: A weak hurricane might throw off lots of tornadoes, while a strong one might produce few.

The long paths of Hurricanes Ida and Ivan, known as tracks, did make them prone to running into cold fronts and spawning tornadoes. “We typically get more severe tornadoes the more the hurricane moves inland.”

But, she says, “we can’t necessarily say that more intense hurricanes will be longer tracked.”

Part of the problem, Carroll-Smith says, is that researchers don’t fully understand the conditions that lead tropical cyclones to spin off tornadoes. She’s part of a research group right now that’s working to sort out those conditions for past storms, so that they can predict them better in the future.

The fact that Ida’s remnants struck where they did was, in some ways, bad luck—it could have met a cold front in Tennessee, or made it out to sea first. But that general region, which sees the most hurricane activity on average, is also likely to feel the biggest changes. “Can we see something like Ida happen again in terms of intense rainfall? Of course” says Carroll-Smith.

But, she stresses, the danger is when tornadoes or other impacts hit communities that have been left vulnerable. In Ida, it’s clear that heavy rain didn’t have to mean catastrophe: As people drowned in their apartments in Queens, streets in midtown Manhattan stayed dry.