Archive Gallery: The Science of Sleep

Tips for more restful slumber, decoding how we dream and just a dash of pseudoscience 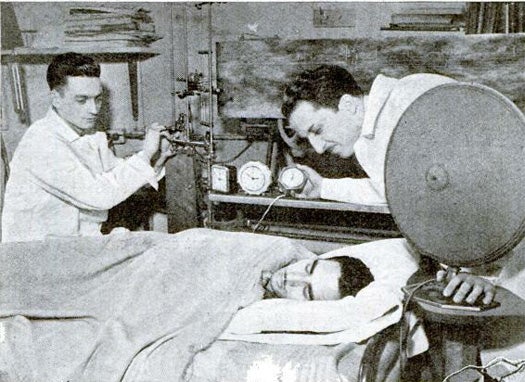 We spend a third of our days asleep, and a good portion of the rest of them talking about it. We had a good night’s sleep, a bad night’s sleep, we stayed up too late, got up too early, now we’re exhausted, last night we wrote a perfectly coherent essay in our sleep… well, maybe not. But Dr. John D. Quackenbos did, or so says a Popular Science article from 1919.

And in true archive gallery form, there’s more weirdness where that came from. Putting people into a “frozen sleep” to cure cancer, a bizarre fix for insomnia, a soundproof sleep booth and more.

We’ve also sprinkled in some interesting facts about the effects of sleep deprivation, and what happens when you dream. Enter the gallery above to learn more. Hopefully we don’t put you to sleep.

PopSci rounded up a veritable who’s who of sleepwalkers for this story on somnambulism, or activities performed by sleeping people. Here are some of the most fantastic tales:

We also noted that “somnambulism is generally confined to children or to the youthful – in other words, to those happy people who still preserve illusions.” In other words, if you want to write essays in your sleep, be sure never to lose your childlike sense of wonder.

If you’re having trouble sleeping, why not lie in an incredibly uncomfortable-looking position? It seems counterintuitive, we know, but it must work, otherwise they wouldn’t give it a patent. Right? The key to this method is a two-piece mattress, with one side able to be folded in half. Before you go to sleep, fold the subdivided side in two, creating a ledge upon which you can rest your weary head. This helps relieve your brain’s blood pressure. (And works out your abs?) Once you feel drowsy enough, you can fold the mattress back out into a single layer, lie down and catch the midnight express to dreamland.

In 1925, two scientists stayed awake for five days and four nights, to test the effects that sleep deprivation would have on the human body. One of them recounted his story to us. At first, he did fine. A little weary, perhaps, but not too bad. On day three, though, he had to stop himself from “thrashing” his assistant, who he had instructed to keep him awake by shaking him periodically. On the fourth day, he slipped into a depression, and by day five his eyes were burning, and he was constantly hungry. His assistants took him to a cabaret, in hopes that the glitz and glamour would help keep him awake, which it did, he said, but “I was so tired that I could have gone to sleep standing up. In fact, I am sure I would have done so had I been able to evade my escorts and brace myself against a wall or post.” Despite this harrowing ordeal, the researcher claimed that after two normal days of sleep, he was right as rain.

In college, my roommate was convinced that I was a “hypersomniac” because I regularly slept until 2 p.m. on weekends. Eight hours a night should be more than enough for anybody, she reasoned. According to Dr. Donald A. Laird, we were both wrong, though, I suppose, me more so than her. All the people who told you to be sure to get enough sleep, those who “claimed to have your interests at heart” (suggesting, that they in fact did not, but don’t worry, Dr. Laird does) were wrong. If you need more than six hours a night, he said, it’s because you’re not doing it right. You have to train yourself to sleep more deeply, Laird says. He suggests taking a 45-minute nap at noon, and sleeping half on your side, half on your stomach to help facilitate this. An unrelated, but nonetheless disturbing fact revealed by this story: Scientists apparently learned that blood flow to your brain decreases when you sleep thanks to a Parisian beggar who lost part of his skull. In the hospital, scientists “were able to watch the blood stream ebb and flow as he slept and awoke.”

To figure out what conditions are necessary for a good night’s sleep, scientists at the University of Chicago subjected volunteers (we assume mostly college students hard-up for beer money) to perhaps the least restful slumber ever. They set off loud noisemakers while the subjects slept, and the volunteers had to press a button as quickly as possible once they heard the noise. The time lapse between the noise and the pressing of the button would show how soundly they had been sleeping. The question that is not answered though, is how this guy ever got to sleep in the first place with these lab coats hovering over him with a timer.

If you have ever felt jealous of hibernating animals, and wished that perhaps humans could sleep all winter rather than braving the slush and the ice, and if, what’s more, you’ve long suspected that such a state could cure some of humanity’s worst ailments, like, say, cancer, then this is the article for you. If you are a normal person who thinks freezing people to the point where their organs stop working is a bad idea, maybe not so much. In a radical experiment, 32 women suffering from inoperable cancer agreed to have their body temperatures reduced to as low as 82 degrees Fahrenheit, essentially putting them in a state of suspended animation. When they were awakened five days later with “hot applications and steaming coffee,” their cancer appeared to be receding and they “began to feel new interest in living.” Science.

If you’re a light sleeper (and not claustrophobic, or afraid of being buried alive), then the sleep booth might be just the thing for you. It’s a portable, air-conditioned, sound-proof compartment created by Joseph Landless that fits over a full length bed. Landless invented the sleep booth to sequester himself from the light and noise of the daytime when he was on a nocturnal sleep schedule. In the winter, an electric heater can take the place of the cooling system.

Sleep, the secret weapon of the at-home warriors. PopSci did its patriotic duty by advising night-shift workers on how to get adequate Zs during the daytime. After a hard shift, to avoid “a nervous tiredness,” relax with some simple exercises and a warm shower. Then, muffle your telephone with a pillow (seen on the left) so you won’t be disturbed by the ringing. After all, it’s 1943. You can’t just put it on silent. Don’t go to bed hungry, but don’t eat a heavy dinner either. Instead, opt for “a healthful salad and a glass of milk.” After you set aside your glass, slip on an eye mask to more effectively block out the sun. We couldn’t seem to come to a conclusion on the optimal temperature for slumber. On one page we said “even a mild chilling, which may not awaken the sleeper, maybe enough to cause involuntary muscular tension.” Then on the very next page we claimed that “a room that is close or too warm will leave you feeling heavy and thick-headed when you get up.” So, do whatever you want, I guess.

Here are some handy facts about dreams to keep in your back pocket for the next bar trivia night, from our 1961 article: