Is it possible to sneeze while you are sleeping?

We might be too deep in our slumber to do so. 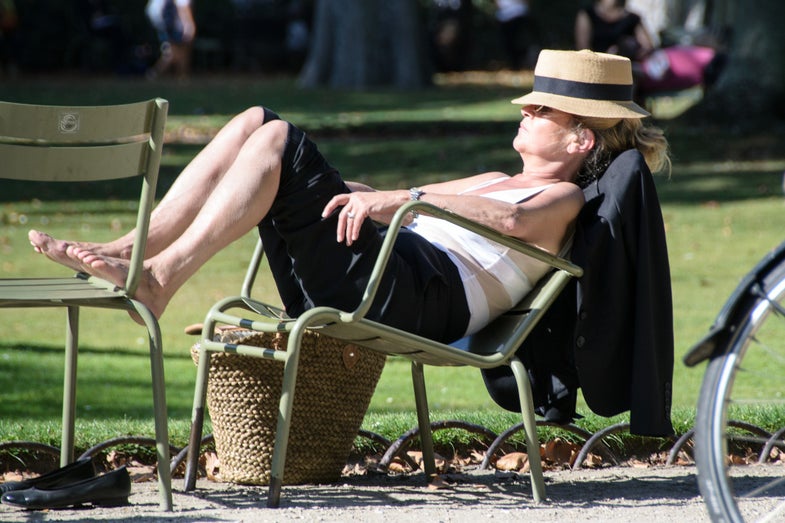 Have you ever sneezed so loudly in the middle of the night that you’ve woken yourself up? Think about it. The answer is likely no. In fact, many sleep researchers and neuroscientists think it’s essentially impossible to sneeze while you sleep.

First, a caveat. To date, there doesn’t seem to be any published studies that questioned whether we sneeze during our sleep. Instead, physiologists and sleep researchers have attempted to answer this question based on our current understanding of how our brains and bodies work while we sleep.

“As far as I know, I don’t think people sneeze during sleep,” says sleep researcher Steven Shea, director of the Oregon Institute of Occupational Health Sciences at Oregon Health and Science University. “I’ve studied hundreds of people sleeping, and I’ve never witnessed anyone sneezing during sleep…but, I’ve never provoked them, either.”

Shea recalls a story which suggests this hypothesis may be true. He once saw a boy with a chronic cough. “He was coughing probably every 10 to 15 seconds of his waking life,” Shea says. But, the boy’s parents told him that the child would stop once he fell asleep. “True enough. I was looking at his brain waves and as soon as he went into the lightest state of sleep, his coughing stopped. And then he would wake up in the middle of the night, cough again, but then he would fall back to sleep and not cough.”

Shea has some guesses as to why that boy stopped coughing—and why we don’t sneeze—in our sleep.

For one, while in bed, many of us are exposed to fewer things that’ll make us sneeze. There aren’t as many people or pets kicking up dust in the dead of night when we’re catching up on our needed zzz. And for those of us who experience the photic sneeze reflex—sneezing when you see the sun or other bright light—chances are, you’re sleeping in a darkened room.

But aside from external reasons, there are physiological ones, too. We experience two different types of sleep throughout the night: REM and non-REM. REM, or “rapid eye movement,” sleep takes up about 20 to 25 percent of our night. During this time, we vividly dream, our eyes flicker wildly under our lids, and our brainwaves look similar to those when we’re awake. Non-REM sleep, on the other hand, results in that deep, peaceful slumber. These two kinds of sleep may have different ways of keeping us from sneezing while we’re otherwise dead to the world.

With non-REM sleep, it simply takes more to penetrate into our subconscious. In non-REM sleep, explains Shea, there’s a lot more filtering and suppressing going on. For instance, getting tapped lightly on the hand doesn’t register as strongly in your brain when you are asleep as it does when you’re awake. You can actually see this effect on an EEG monitor. When sleeping human subjects are tapped on the hand, they will produce less electrical activity than if they were tapped with the same strength while awake. (It’s probably why you sometimes have to violently shake someone to successfully wake them.)

During slow wave sleep, a type of non-REM sleep, the thalamus and the cerebral cortex (the brain’s relay station and the outer, folded portion, respectively) activate each other to keep things quiet in our brains. “The thalamus and the cerebral cortex are in this dance,” Shea says, “where they’re controlling each other, and it’s sort of blocking the sensory input.” However, Shea points out that this relationship doesn’t block things completely, it just makes it tougher for stimuli to get through.

“But the beauty of sleep is that it’s almost immediately reversible when there’s a dangerous situation,” Shea says. If there’s a strong enough stimulus (like the smell of smoke or obstructive sleep apnea), it can pierce through that sleepy, muted stupor and wake us up. Shea reckons that if we were to sneeze in the middle of the night, it would be because some external stimulus that typically causes sneezing would wake us up first, and then we would sneeze.

Sleep consultant Don Watenpaugh, vice president of the Texas Society of Sleep Professionals and member of the Sleep Research Society, agrees. “The brain can’t sleep and actively listen, see, smell, [and feel] at the same time,” says Watenpaugh. “However, if a sensory stimulus is strong enough, it can wake us up. This includes things that make us sneeze.”

REM sleep, on the other hand, prevents sneezes in a potentially different way. During REM sleep, while we’re dreaming of flying on dragons or fighting bad guys, our brains put our bodies on lockdown to keep ourselves from actually acting out our dreams. “A sneeze is a big coordinated muscular activity,” says Shea, but because of that REM-induced lockdown, “some of those muscles are semi-paralyzed,” and the ability to sneeze nearly impossible.

Instead, Watenpaugh says, we might just incorporate the sneeze-inducer into our dreams: perhaps you walk through a jungle thick with cobwebs, or compete in a mad dash through a dusty Ancient Roman track. Sleep tight!

Ask Us Anything
sleep